In Part 9 of this series I began to examine the core argument of Kreeft’s Objection #1 (Too Many Witnesses) against the Hallucination Theory:

B. IF on multiple occasions more than two persons had the same experience of an alleged appearance of the risen Jesus at the same time, THEN it is extremely unlikely that those experiences on ALL of those occasions were hallucinations.

3a. On multiple occasions more than two persons had the same experience of an alleged appearance of the risen Jesus at the same time.

C. It is extremely unlikely that the experiences on ALL of the occasions when more than two persons had the same experience of an alleged appearance of the risen Jesus at the same time were hallucinations.

I pointed out that it is natural for skeptics to raise objections to the historical claim made in premise (3a), but that premise (B), a generalization about group hallucinations, is in need of further clarification, and that I suspected that when the meaning of (B) became clear, it too would turn out to be FALSE or DUBIOUS.  So, I worked on clarifying the meaning of premise (B).  Probably the most important bit of clarification is that the term “hallucination” should be understood in a broad way, such that it includes DREAMS as being examples of hallucinations.  Here is the definition of “hallucination” that I proposed:

Kreeft needs the term “hallucination” to be understood in this broad manner, otherwise, his case for the resurrection of Jesus immediately FAILS, because if “hallucination” is understood more narrowly, in a way the excluded DREAMS, then Kreeft would have no objection against, and thus no refutation of, the skeptical theory that one or more disciples had a DREAM about Jesus that they mistakenly believed to be experiences of a real and embodied risen Jesus, and that these dream experiences became the basis for their belief that Jesus had physically risen from the dead.

KREEFT’S ARGUMENT FOR PREMISE (B)

Here is the argument that was given in support of premise (B):

2a. It is very unlikely that more than two persons could have the same hallucination at the same time.

B. IF on multiple occasions more than two persons had the same experience of an alleged appearance of the risen Jesus at the same time, THEN it is extremely unlikely that those experiences on ALL of those occasions were hallucinations.

THE THINKING BEHIND PREMISE (2a)

Even just a few “details” about a dream or hallucination can imply a huge number of possible alternative DESCRIPTIONS of that experience.  For example, a person might describe a portion of a dream this way:

I watched a full-grown orange tabby cat walk slowly across the foot of my bed.

For the simple description “a full-grown orange tabby cat slowly walking across the foot of my bed” we can abstract various general categories:

This thinking is what I believe is behind McDowell’s reference to “great detail” in the “descriptions of the appearances” in his presentation of his “Very Personal” objection against the Hallucination Theory:

Christ appeared to many people, and descriptions of the appearances involve great detail… (TRF, p.84)

FACTUAL PROBLEMS WITH THE THINKING BEHIND PREMISE (2a)

It seems, at first thought, that because the following brief description suggests well over a million alternative scenarios, that it would be very unlikely for more than two people to have a hallucination or dream that fits this description:

I watched a full-grown orange tabby cat walk slowly across the foot of my bed.

However,  as I have argued elsewhere, people in fact often do have similar dreams, and it is quite possible for two people to have the “same dream” at the same time:

The subjects of the studies by Zadra and Nielsen were STUDENTS.  Note that some of their most common dreams involved common experiences and fears of students:  school, teachers, or studying,  and arriving too late, and failing an examination.  This is a strong indication that the contents of dreams are often related to the sorts of emotions and events that the dreamers have commonly experienced in their waking lives.

It is also important to note that according to one study of dream contents one of the more common types of dreams that people report is “A person now dead being alive”!! 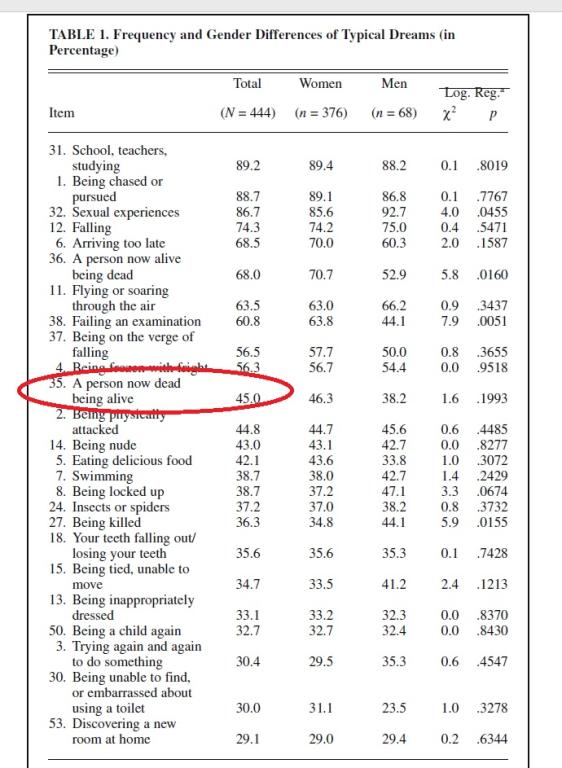 So, the chance that some of the disciples of Jesus had dreams about Jesus being alive and about Jesus teaching people is quite good, and thus the possibility of two people having the “same dream” about Jesus at about the same time after Jesus died is much greater than one might initially think.  Although there are billions of different possible descriptions of different dream contents that we can imagine, the dreams people actually have are NOT random combinations of people and events; they are based largely on the past experiences and memories of the dreamers.  If a group of people share many common experiences, beliefs, and memories about a particular person (like Jesus), then the chances that two of these people will have a similar dream or even the “same dream” about that person are significant.

EVALUATION OF PREMISE (2a) and PREMISE (B)

I have previously argued that the term “hallucination” must be interpreted broadly so that it includes DREAM experiences, otherwise the cases for the resurrection of Jesus presented by Josh McDowell and by Peter Kreeft will immediately FAIL.   Here is premise (2a):

2a. It is very unlikely that more than two persons could have the same hallucination at the same time.

This premise is TRUE only if the following claim is TRUE:

2b. It is very unlikely that more than two persons could have the same DREAM at the same time.

But we have seen that premise (2b) is initially plausible because we are aware that there are billions of different possible alternative descriptions of dream experiences, and because we are tempted to assume that all of these billions of possible descriptions of the contents of a dream are equally likely to occur in a dream, and that each different dream description has only a very tiny probability of actually occurring in a particular dream.  But we have seen that people do in fact often have similar dreams because dreams are based largely on the experiences, beliefs, and memories of the dreamers and because groups of people can have very similar experiences, beliefs, and memories (e.g. college students or devoted followers of a religious teacher).  Therefore, claim (2b) is FALSE or at least DUBIOUS.

October 10, 2021 Evidence that Doesn't Demand a Verdict
Recent Comments
0 | Leave a Comment
Browse Our Archives
get the latest updates from
The Secular Outpost
and the Patheos
Nonreligious
Channel
POPULAR AT PATHEOS Nonreligious
1