Evidence that Doesn’t Demand a Verdict

I am a left-wing atheist who hates Donald Trump and who is disgusted with every White Evangelical Christian SHITHEAD who supports Trump and his evil racist, sexist, anti-immigrant basket-of-deplorables.

I spend much of my time critically examining the arguments of Evangelical Christian apologists like Norman Geisler, Peter Kreeft, and Josh McDowell.  I have come to the conclusion that the intellectual efforts of these apologists amount to stinking piles of dog shit.  They present mountains of unclear, illogical, ignorant, dubious, and false BULLSHIT as if they were presenting intelligent arguments, thus polluting the minds of millions of Christians by presenting paradigm examples of IDIOCY and STUPIDITY as if they were presenting examples of intelligent reasoning.  I have little respect for these Evangelical Christian apologists and significant contempt for them.

NEVERTHELESS, the recent criticisms of Josh McDowell as being a “racist” strike me as UNFAIR and UNFOUNDED.  So, although I have significant contempt for McDowell and for White Evangelical Christians in general, I am going to BRIEFLY DEFEND McDowell against what seems to me to be UNFAIR and UNFOUNDED criticism.  Even IDIOTS like McDowell can be good-hearted people who are decent and morally upright in character.  In any case, the EVIDENCE presented fails to justify the strong moral condemnation of McDowell.

Part of my strong reaction to recent criticisms of McDowell concerns the sloppy use of the word “racist” and “racism”.  These terms are at least ambiguous and so when used to criticize and to morally condemn a person should be CLARIFIED, at the very least.  Furthermore, since one of the meanings of these terms is particularly odious, to fling these words around in a sloppy and careless way is offensive and is counter-productive in the battle against racism and racial prejudice.

In my view, nobody should be morally condemned as being a “racist” simply on the grounds that he/she has said or done something that indicates racial prejudice.   Racial prejudice is wrong and should be called out whenever it occurs, but the reality is that virtually ALL white people have some degree of racial prejudice which on occasion influences the words and actions of a white person.

When people say that Josh McDowell is a “racist” this is a very strong moral condemnation of him because ONE meaning of “racist” implies a person who holds the belief that some particular races are inferior to other particular races.  But there is NO EVIDENCE that McDowell holds such a belief or advocates such a belief.  So, the use of the word “racist” about Josh McDowell is SLANDEROUS because it suggests a claim about McDowell that IF TRUE would justify strong moral condemnation, but this is a claim for which there is NO EVIDENCE.

THE OFFENDING WORDS OF MCDOWELL

Here is a tweet that provided a quote from McDowell that led to the moral criticism and condemnation: 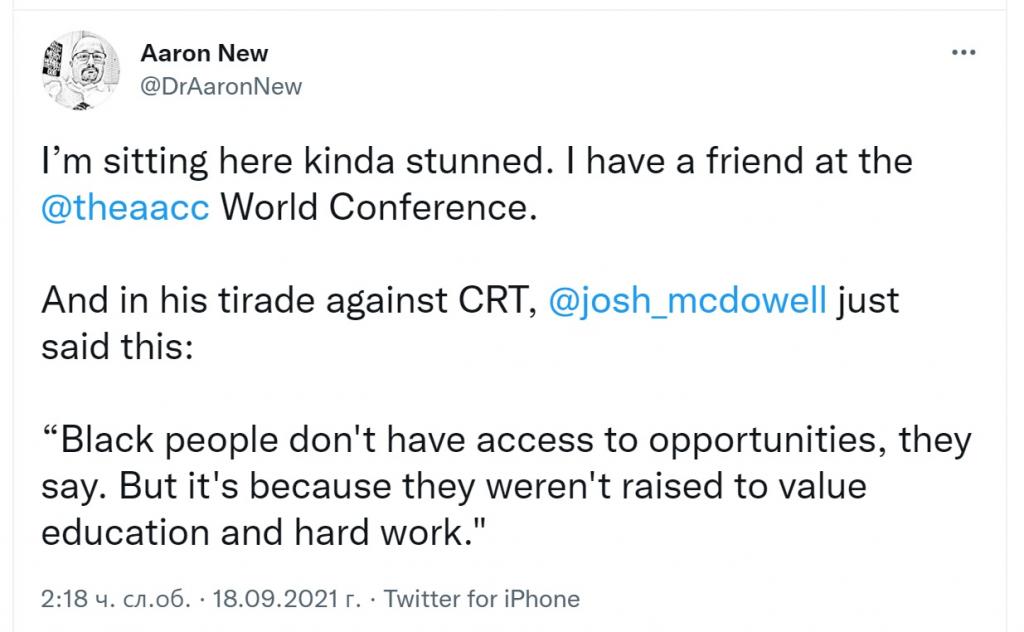 Another person who was present provides a bit more extensive quote of McDowell: 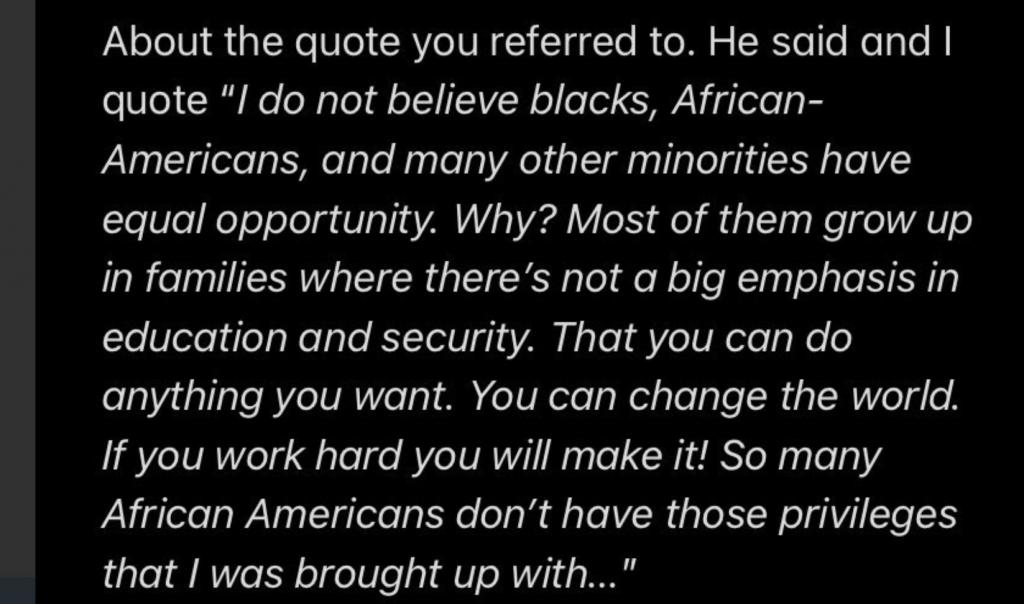 MY VIEW OF MCDOWELL’S OFFENDING STATEMENT

First of all, it is patently OBVIOUS to anyone who has two brain cells to rub together that McDowell’s comment is about NURTURE rather than NATURE.  This is clearly NOT a comment about the genes or inherited traits or the natural character of black people.  This is CLEARLY a comment about how black children are generally RAISED or SOCIALIZED.  So, it is clear and obvious that this quote has NOTHING to do with “racism”; that is to say, there is NO EVIDENCE here that McDowell believes that black people all belong to a race that is intellectually or morally inferior to white people who belong to a superior race of humans.

To use this quote as the basis for condemning McDowell as being a “racist” is SLANDEROUS because ONE clear meaning of this term is that the person in question consciously believes that some races are inferior to other races, and in this context, that means holding the belief that black people all belong to a race that is morally and intellectually inferior to the race to which white people allegedly belong.

Third, McDowell probably does deserve some degree of chastisement and criticism, because he probably made this statement on the basis of PREJUDICE and STEREOTYPE, rather than on the basis of sociological FACTS and DATA.  If McDowell had studied the sociology of black families and of the rearing of black children (in the USA), and also studied the sociology of white families and of the rearing of white children (in the USA), then he might have had FACTS and DATA that supported his statement.

However, McDowell has quickly apologized for making this statement, and I think it is very unlikely that he would apologize for making this statement if he made the statement on the basis of FACTS and DATA that he learned from studying the sociology of black families and child-rearing vs. white families and child-rearing.  So, it seems very likely that his statement was NOT based on FACTS and DATA, and thus it was likely made on the basis of PREJUDICE and STEREOTYPE.  In short, it does seem to me that McDowell should be chastised and criticized, but that he is guilty of racial prejudice in his thinking and speaking, and NOT guilty of RACISM.  There is NO EVIDENCE here that McDowell is a racist.

Fourth: “There but for the grace of God go I”.   I am a left-wing atheist, and I HATE racism and racists.  I hate NAZIs.  I hate the KKK.  I hate the alt-right.   I hate skinheads.  I hate yahoos who wave the Confederate flag (particularly the SHITHEAD who waved the Confederate flag in the Capitol Building during the Trump-inspired insurrection). But I am a white guy, and I am aware that us white guys (and white gals) all have some degree of racial prejudice.  Our culture in the USA is saturated with racial prejudice.

So, I might one day say (or write) something STUPID that comes from a PREJUDICE or STEREOTYPE about black people (or about some other people of color).  I don’t want a FREE PASS if that happens.  I hope that I would be called out and criticized for speaking or writing something that arises from racial prejudice in my thinking.  But I would OBJECT to being called a “racist” and to being accused of “racism” and to being morally condemned for the sin of “racism” on the basis that I manifested some racial prejudice in my thinking.  I would view such a strong moral condemnation as being UNFAIR and UNFOUNDED and SLANDEROUS because I do NOT believe that some races are inferior to other races, and I am firmly opposed to such a belief or ideology.

This is the standard that I would insist upon for how other people treat me, so this is the standard I will insist upon for how people treat Josh McDowell.  Yes, he made ONE statement that reflects PREJUDICE or STEREOTYPE about black people, and this does reflect racial prejudice in his thinking.  But that is NOT equivalent to being a “racist”.  This is NOT EVIDENCE that McDowell believes that black people belong to an inferior race of humans, nor that white people belong to a superior race of humans.  Making a statement that reflects racial prejudice in one’s thinking is NOT as bad and as evil as holding (or promoting) the evil belief that some people belong to an inferior race of humans.

MCDOWELL’S APOLOGY FOR HIS STATEMENT

Here is McDowell’s apology for his offending statement: 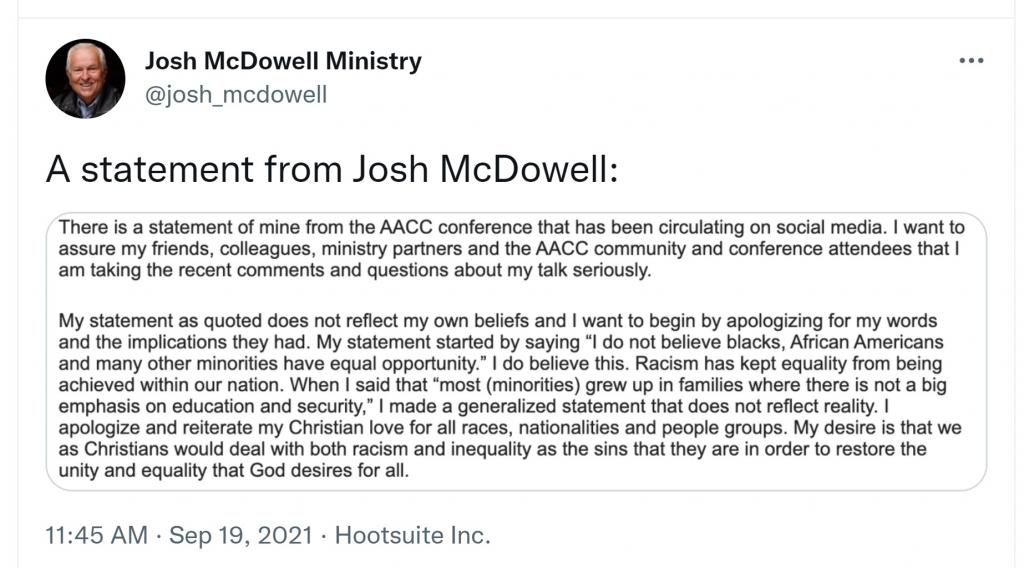 I see nothing wrong with this apology.  It is a clear and straightforward apology.  If I had made a stupid statement like McDowell did, based on racial prejudice or stereotypes, then I would apologize in a similar manner.

McDowell could have gone a bit further by admitting that he made a statement that “does not reflect reality” BECAUSE of his own racial prejudice, because of prejudice and stereotypes in his own thinking about black people.  But he did identify the specific problematic statement as being WRONG, and he affirms his opposition to racism.

I think in this context McDowell is using “racism” in the weaker sense of “racial prejudice”, which makes it harder for him to admit that his statement arose from racial prejudice in his own thinking (because that would be admitting that he was involved in and was promoting “racism”).    Racism is indeed one reason why equality for blacks has not yet been achieved, but another important factor is racial prejudice, such as we see in the thinking and words of Josh McDowell.

NOTE: Given the general sloppiness and unclarity of McDowell’s thinking, it is not a surprise to me that he failed to notice this important distinction, and failed to make use of it in his apology.

October 7, 2021
Defending the Hallucination Theory - Part 10: Evaluation of the Group-Hallucination Principle
Next Post

October 15, 2021 Defending the Hallucination Theory - Part 11: The Group Hallucinations Historical Claim
Recent Comments
0 | Leave a Comment
Browse Our Archives
get the latest updates from
The Secular Outpost
and the Patheos
Nonreligious
Channel
POPULAR AT PATHEOS Nonreligious
1

The Ongoing Catholic Scandal: What the...
Roll to Disbelieve
Related posts from The Secular Outpost