As part of my response to Peter Kreeft’s first three objections against the Hallucination Theory,  I want to point out two major problems with EYEWITNESS TESTIMONY:

In Part 14 of this series, I provided a summary of evidence for the view that YOUNG CHILDREN AND TEENAGERS ARE DISHONEST, and in this post, I will be providing evidence that YOUNG ADULTS (specifically college students) ARE DISHONEST.

If most people lie and deceive, and if people often lie and deceive,  then we have good reason to be skeptical.  We have seen in previous posts that most children lie and lie frequently,  and that most teenagers lie and cheat and do so frequently; it is now time to take a look at the behavior of college students.

A study of lying in everyday life was conducted in which one group consisted of college students and a second group consisted of community members (ranging from 18 to 71 years old).  The participants each kept a  journal for one week in which they were to write down each social interaction and each lie they told.

The results of the study were summed up this way [emphasis added]:

Lying Is a Fact of Daily Life
The studies reported here provide some of the first data, and by far the most extensive data, on some of the most fundamental questions about lying in everyday life. As we expected, lying is a fact of daily life. Participants in the community study, on the average, told a lie every day; participants in the college student study told two. One out of every five times that the community members interacted with someone, they told a lie; for the college students, it was one out of every three times. Of all of the people the community members interacted with one on one over the course of a week, they lied to 30% of them; the college students lied to 38% of the people in their lives. (p.991)

Another study compared a group of high school students with a group of college students.  In this study, the students were asked (in questionnaires) if they had lied to their parents on various topics (friends, alcohol/drugs, parties, money, dating, and sex) at least once in the past year.  Here is a summary of the results [emphasis added]:

Lying to parents was indeed a frequent behavior among the adolescents and emerging adults. Figure 1 shows the percentages of students who had lied to their parents about 6 different issues at least once within the past year. As can be seen, the percentage of high school students who had lied about the different issues ranged from 32 to 67% whereas for college students the range was 28–50%. Eighty-two percent of all students indicated that they had lied to their parents about at least 1 of the 6 issues during the past year. (p.105)

“The Right to Do Wrong: Lying to Parents Among Adolescents and Emerging Adults”

Another study of college students looked into how often such students lied on their Resumes [emphasis added]:

This study explores how Linkedin shapes patterns of deception in resumes. The general self-presentation goal to appear favorably to others motivates deception when one’s true characteristics are inconsistent with their desired impression. Because Linkedin makes resume claims public, deception patterns should be altered relative to traditional resumes. Participants (n = 119) in a between-subjects experiment created resumes in one of three resume settings: a traditional (offline) resume, private Linkedin profiles, or publicly available Linkedin profiles. Findings suggest that the public nature of Linkedin resume claims affected the kinds of deception used to create positive impressions, but did not affect the overall frequency of deception. Compared with traditional resumes, Linkedin resumes were less deceptive about the kinds of information that count most to employers, namely an applicant’s prior work experience and responsibilities, but more deceptive about interests and hobbies. The results stand in contrast to assumptions that Internet-based communication is more deceptive than traditional formats, and suggests that a framework that considers deception as a resource for self-presentation can account for the findings.

“The Effect of Linkedin on Deception in Resumes”
Jamie Guillory, M.S., and Jeffrey T. Hancock, Ph.D.

Let’s look at some evidence on academic cheating by college students:

[There is]…a growing body of primarily U.S.-based research that suggests academic misconduct has become commonplace amongst the majority of college and university students…(p.50)

Purportedly, academic misconduct has always been with U.S.. It has been described in the higher education literature as “ubiquitous” (Pincus & Schmelkin, 2003); as an “epidemic” (Haines, Diekhoff, LaBeff, & Clark, 1986, p.342), a “perennial problem” (Davis, Grover, Becker, & McGregor, 1992, p.16), and “one of the major problems in education today” (Singhal, 1982, p.775). Such observations are primarily based on studies of undergraduate students at U.S. colleges and universities (both private and public), using a variety of data collection techniques (e.g., self report surveys, in-depth interviews, experiments), and differing sample sizes (e.g., from less than one hundred students in a single department to thousands of students on multiple campuses).

Although they vary in methodology, these studies have consistently found that the majority of undergraduate students have engaged in some type of misconduct in the completion of their academic work. For example, in Bower’s (1964) seminal multi-campus study involving over 5000 students from 99 U.S. campuses, three out of four students reported engaging in at least one of 13 questionable academic behaviours, with 39% of students reporting having engaged in “serious test cheating” (e.g., copying during an exam with or withoutthe other student’s knowledge, using crib notes, helping someone else to cheaton a test or exam) and 65% reporting having engaged in “serious cheating on written work” (e.g., plagiarism, fabricating or falsifying a bibliography, turningin work done by someone else, copying a few sentences of material without footnoting).

In a similar 1990-1991 study involving over 6,000 students across 31 small to medium sized U.S. campuses, McCabe and Trevino (1993) found that as many as two out of three students reported engaging in at least one of 14 questionable behaviours and that almost 20% of students reported engaging in 5 or more such behaviours. In this case, 64% of students were found to have engaged in serious test cheating and 66% in serious written cheating.

Smaller, single campus studies have also reported high rates of academic misconduct. For example, Hetherington and Feldman (1964) used an experimental design in which 78 psychology students at one U.S. state university were presented with multiple opportunities to cheat on actual course exams. More than half (59%) of the students exhibited some form of cheating, the vast majority (87%) of whom were observed to cheat multiple times. Payne and Nantz (1994) used in-depth interviews to study the cheating behaviours of 22 business students in a medium-sized, U.S., state university. Nineteen (or 86%) of the students admitted to having cheated in their college work. Finally, Singhal (1982) surveyed 364 engineering students at a U.S. state university; 56% of students reported having cheated.

Some of the data from the above-mentioned studies are shown in the following table (click on the image below to get a clearer view of the table): 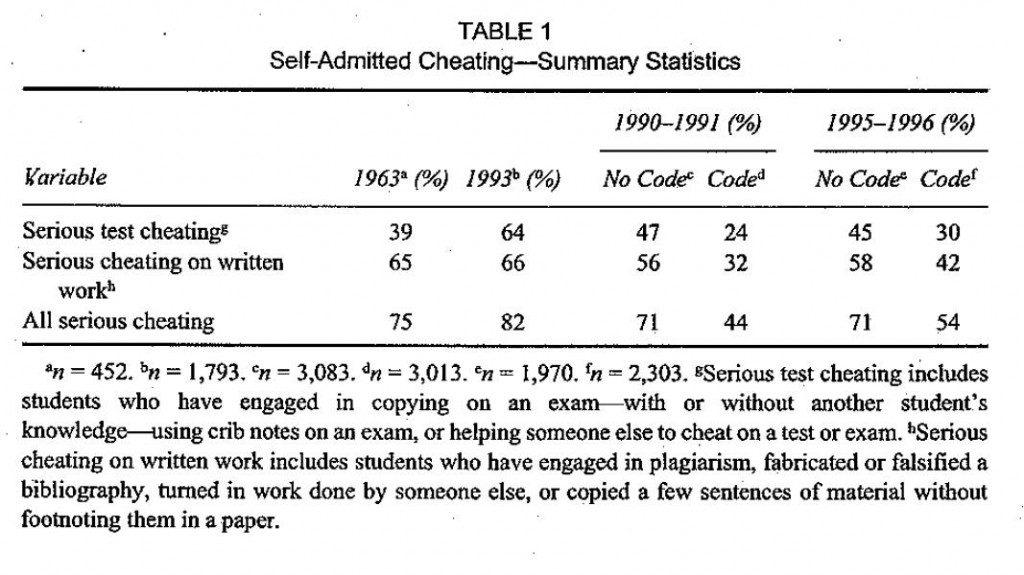 The table above is from page 223 of the following article:

A review of a large number of studies on cheating by college students produced similar percentages:

NOTE: The original paper referenced above was:

One study published back in 1987 noted that the use of a method called Randomized Response Technique yielded significantly higher cheating report rates when compared with standard anonymous questionnaires:

Academic cheating behavior by university students was surveyed using the randomized response technique (RRT) and by conventional anonymous questionnaire methods. RRT is a survey method that permits sensitive information to be collected but that precludes associating the respondent with a particular response to a survey item. The estimated proportions of students who have engaged in cheating behaviors were, in general, larger using RRT.  Moreover, this result is consistent with earlier findings for other sensitive behaviors. That under-reporting is a serious problem with anonymous questionnaires is supported by the fact that the anonymous questionnaire estimates ranged from 39% to 83% below the RRT estimates. Furthermore, using a covariate modification of RRT, there was a distinct inverse relation between students’ estimated grade-point average and the tendency to engage in cheating behavior. While these results have direct implications for estimating cheating behavior in higher education, more broadly, they raise serious concerns about the use of anonymous questionnaires when survey topics are sensitive.

Another reason that conventional anonymous questionnaires might result in minimizing the amount of cheating by college students is the problem of volunteer sample biases [emphasis added]:

Reported rates of cheating may significantly underestimate the threat to academic integrity in universities due to volunteer sample biases. To vary the incentive states of the participants, we sampled using: 1) a 126 item questionnaire solicited through campus email, 2) a 33 item questionnaire solicited the same way, and 3) a questionnaire that offered course credit. Course-credit participants were more likely to report a cheating behavior (80.7%) than the long questionnaire (68.5%) or the short questionnaire (56.3%), both of which offered no tangible reward. We also asked subjects to respond regarding the cheating behavior of a person that they know best in two different research designs. In both designs, participants reported less cheating for themselves than they did for others. The hypothesis that we underestimate cheating through volunteer sampling was clearly supported. (Contains 4 tables.)

We have seen that data from the past several decades consistently shows that most college students cheat on either tests or written assignments or both.  70% is a conservative figure, but given that most of the data is self-reported cheating by college students, whom we know frequently lie, and given that there is empirical evidence that volunteer sample bias and use of conventional anonymous questionnaires results in significant underreporting of cheating, the actual percentage of college students who cheat may well be in the 80% to 90% range.

MOST college students lie on a DAILY basis.

MOST college students lie to their parents on one or more important topics each year.

ALMOST ALL college students lie on their resumes.

College students are LIARS and CHEATERS. 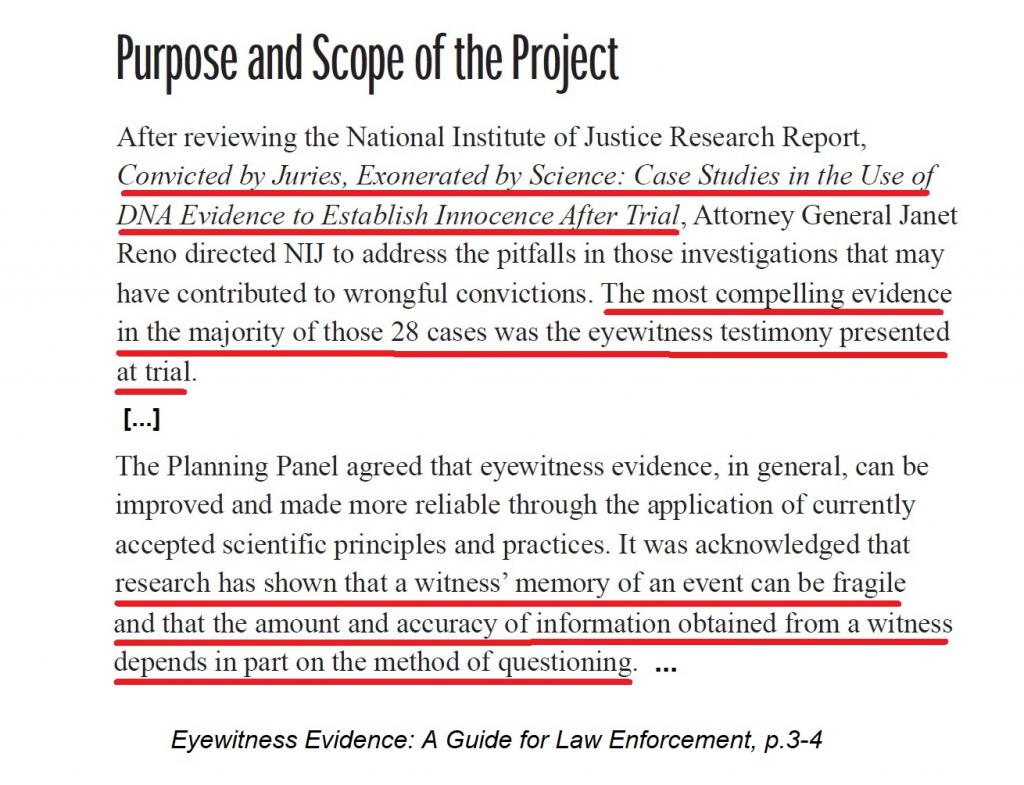