My conversation about slavery with a Mormon apologetic

Occasionally I pop onto Twitter and search for “atheist” or “atheism” to see what people are saying.  For the most part I’m looking for new people to follow who may have interesting things to say, or I’m looking for people who are looking for help in relating to atheists and offering my book as an aid.  Last night I came across a gentleman who decided it would be cool to tweet out to the world, “To Atheist; God keeps his promises, he never lies, try him.”  Now, normally I don’t seek these types of people out, but since he started out addressing me as an atheist, I thought I’d respond.  The following is our conversation over Twitter, which ends up being a fine display of apologetics in action. 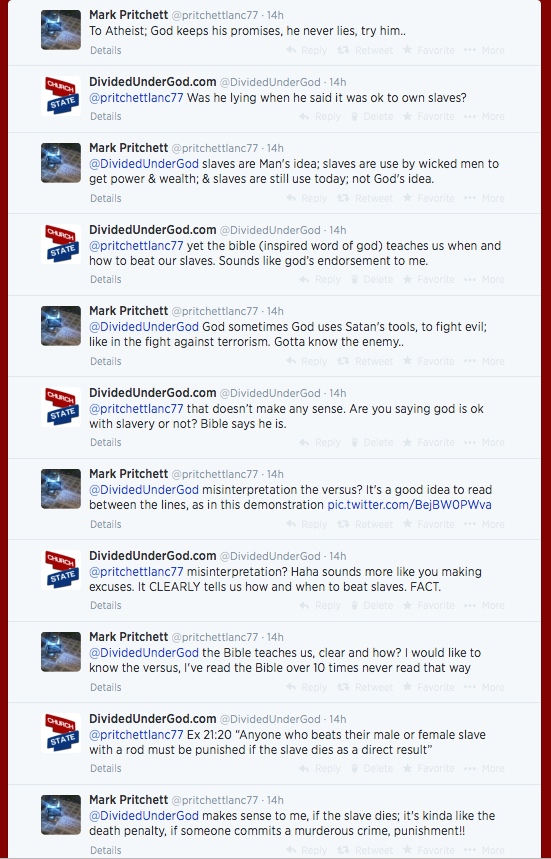 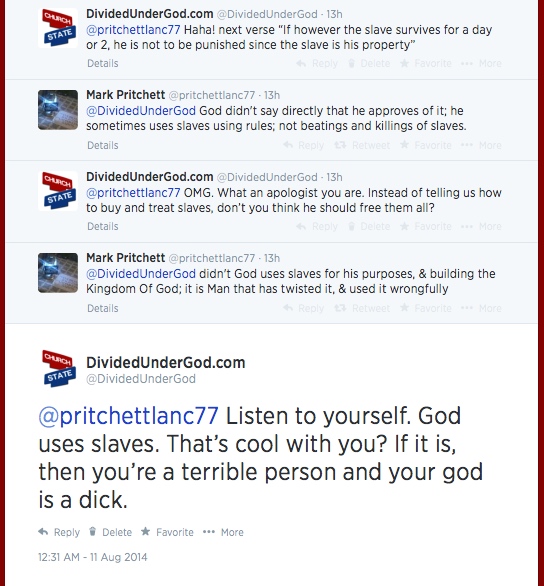 Sure, I oversimplified a bit, but the display of tunnel vision from Pritchett was astounding.  He has been taught that the Bible is this wonderful thing, and has claimed to read it 10 times, yet was unaware of any mention of instructions for slavery contained within.  And when confronted with the evidence, doubled down and tried to spin it in a positive way (failing miserably).

Are the religious so dedicated to not being wrong that they can so easily discard evidence of the Bible’s brutality?  Have the “good parts” of the Bible been so drilled into their brains that they refuse to see the ugly truth?

I welcome your comments and thoughts.  What would you have said to try to get him to think outside the apologetic box?

July 11, 2014
Atheists Will Be Well Represented in Town of Greece Tuesday
Next Post