Sour Grapes of Wrath: After Marriage Equality Case, the Christian Right is Calling for a Theocracy

Sour Grapes of Wrath: After Marriage Equality Case, the Christian Right is Calling for a Theocracy July 7, 2015 Kevin Davis

That’s the message that was quickly churned out from Mike Huckabee’s campaign for President in the form of a graphic that was shared by thousands over Facebook and other social media sites, following the Supreme Court ruling in favor of marriage equality.  Huckabee, the candidate of choice thus far in polling of the Christian Right, is boldly asserting that the rules of his religion trump the laws of the United States, and should be followed in place of the laws of the land.  It certainly isn’t much of a stretch to ascertain from that statement that Huckabee would support a Christian theocracy in place of the US Constitution.  I know, Huck’s a nutcase.  Sadly, he’s far from alone.

Another Presidential hopeful, Bobby Jindal, publicly called for the removal of the Supreme Court altogether — not the justices, but the Court.  What?  So one of the Republican candidates who endlessly utters the same tired talking points about the tyranny of President Obama wants to remove the judicial branch of our government, reducing the separation of powers, and ultimately handing more control to the President?  Yeah, that makes sense. 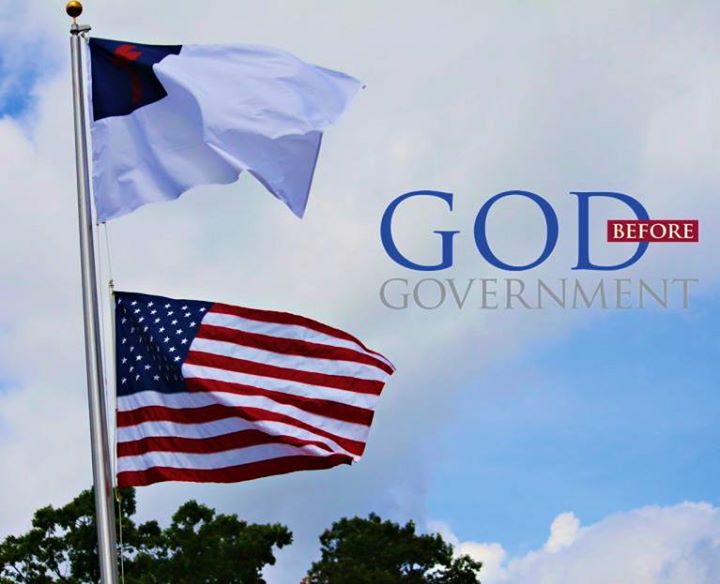 Just last week, North Carolina pastor Rit Varriale ran the official Christian banner up the flagpole at his church, and strategically placed it above the US flag.  His goal in doing this is to impress upon us that we should be following God’s Law above all others.  His intentions have been made public on his website, God Before Government, where he makes a plea to other pastors to do the same and create a movement.  What Varriale apparently doesn’t realize is that such an act is unpatriotic by definition, and is in stark contrast to the foundation of our government and the intentions of our Founding Fathers.

If people like Huckabee, Jindal, Variable, and those who support them want a theocracy, they should first take a look at the other nations around the world who have one.  They’ll soon find out that those who employ a theocratic government are among the most oppressive and backward nations on earth, such as Afghanistan, Iran, and Saudi Arabia.  That is not a coincidence.  When you leave it up to government to police morality, the inherent freedoms of the people vanish.  Secondly, theocracy advocates should take a closer look at the many rules and laws included in the Bible, and ask themselves if their government should be run by their holy book.  This isn’t just about gay marriage, abortion, or the Ten Commandments.  This is about the whole “infallible” text.  You can’t cherrypick your holy book if you’re instituting a theocracy.  It creates unrest and ultimately chaos based on formations of splinter groups who favor a more literal view of the laws of their book than others.  Just look at the various Muslim sects who engage in bloodshed just to assert whose interpretation of the same book is the most righteous.  So if we’re basing the law of the land on the Bible, then it’s time to outlaw tattoos, mixed fabrics, shellfish, and all of the other ridiculous abominations outlined in the Bible.

We all get it.  We understand the Christian Right is upset that it’s now legal to marry someone of the same gender.  We also understand that it’s in their nature to drum up fear in order to further their cause.  Fear of death, fear of hell, fear of the wrath of god, fear of separation from loved ones — religion thrives on fear.  It drives their numbers.  So it’s only natural to overreact and cry armageddon.  But when it’s taken to a level where those with a voice are encouraging others to turn against the very purpose of our nation, it becomes treasonous, especially when some of those dissidents are campaigning for the Presidency.

If you disagree with same-sex marriage, then don’t get married to someone who shares the same sex organs as you.  It’s really as simple as that.  The anti-American message coming out of the Christian Right at the moment is a dramatic overreaction akin to a 7-year-old stomping his feet, slamming doors, and breaking all his toys just because his parents asked him to share with his equally-deserving sibling.  Until Ruth Bader Ginsburg walks into your church and makes you get “gay-married,” this isn’t about religious freedom, as no one is preventing you from practicing your religion.  It’s about equality for those who don’t agree with your “Biblical lifestyle.”

June 26, 2015
SCOTUS Made Me Cry Today -- How This Straight Guy Feels About the Same Sex Marriage Decision
Next Post

August 3, 2015 Defunding Planned Parenthood Would Be a Republican's Nightmare
Recent Comments
0 | Leave a Comment
Browse Our Archives
get the latest from
Nonreligious
Sign up for our newsletter
POPULAR AT PATHEOS Nonreligious
1