National Geographic. Morgan Freeman. Fantastic visuals and an epic tour guide (epic voice too). The partnership promises to chronicle the one-man quest to discover the many “answers” given for humanity’s biggest questions.

This is National Geographic’s “The Story of God with Morgan Freeman,” and this first review will cover the premier episode, “Beyond Death.” In this episode Morgan sets out to discover what happens to us when we die. 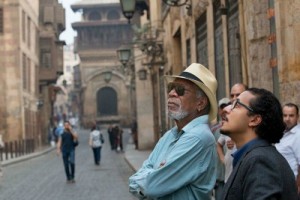 The quest for answers about what happens after death begins with a conversation. Morgan speaks with a man who, after being thrown from a boat, was unconscious underwater for about 15 minutes. While unconscious he had an out-of-body experience, seeing lights and hearing a voice that told him, “This is not your time. You must return because you have a purpose.” The gentleman said that he took the lights and voice to be God. He does not associate God with a particular faith tradition, but believes that God can be found in many religious experiences. Though Morgan seemed intrigued by this story, he offered no more than a nod and smile in response.

Morgan then recounts (to the viewer) his own experience of seeing a light, which occurred when he blacked out at one point in his life. He knows that many people who are close to, or have lost consciousness, also experience lights and voices, and sometimes see visions of family members and friends. But are these phenomena true out-of-body experiences? Morgan offers no answer to this question; so I’ll add my two cents.

Why should we trust the experience of a brain that is deprived of oxygen — not working properly? There are many ways of altering our state of consciousness, from traumatic brain injury to recreational drugs. But in these circumstances, when the brain is malfunctioning, do we trust our judgments about reality? Usually not. For instance, if your friend approached you after an acid trip saying that he has returned from flying above the house, would you believe him? Probably not. So if we don’t trust the brain to tell us what’s real in these less-than-normal operating conditions, why would we think an almost dead brain is reporting anything close to accurate information?

Morgan’s journey takes him to Egypt in order to visit the birthplace of our ideas of an afterlife. It is in the tombs of the Pharaohs that we find the first written descriptions of life after death. Morgan learns that the Egyptians believed that the dead Pharaoh fought each day so that the sun would rise again. They depended on the Pharaoh to maintain the balance of things so that life could go on.

This “depending on the power of the dead” is a belief that occurs in many cultures and religions, evidenced by holidays like The Day of the Dead in Mexico. This tradition dates back to ancient Aztec human sacrifice, in which the sacrifices were believed to fuel the sun. Like the Egyptians, the Aztecs believed that the (sacrifice of) dead were responsible for keeping things in balance so that those who were still living could live in relative peace.

With Christianity, things changed. After Jesus’ supposed death and resurrection, Christians began to believe not only that the dead can offer us power in this life, but also power in the next. The ultimate promise that Christianity makes is that believers will rise again. And in Morgan’s view, “The death and resurrection of Jesus allowed believers to overcome the fear of death — to know they could live forever.” This fear of death is something all humans must overcome, either by simply accepting their fate, or believing in a story that offers some level of comfort.

Next, Morgan travels to India, home to the Hindu religion. For Hindus, death is merely a step into the next life, here in this world. Hindus do not share the western afterlife binary of heaven and hell; instead they believe a person will be reincarnated upon their death, to live again and atone for wrongs done in the previous life. They believe that reincarnation makes us more responsible for this life, because you will suffer the consequences for a bad life in your next.

But why do we need the threat of an afterlife or reincarnation in order to live well? What if this life is the only one we will ever have? If that is the case, then this life is of infinite value and what we do, good or bad, can never be atoned for. Would that not be impetus enough to live the best life possible right now? Wouldn’t our world be a better place if every person was living for this life, and this life only?

The final leg of Morgan’s journey (in this first episode) leads to New York, to discuss with scientists who are attempting to upload human consciousness into computers. Morgan (in that god-like voice) notes that we “yearn to break the bonds of mortality, to become immortal.” And that is what the project to upload consciousness is all about. He wonders whether an uploaded consciousness would be the “real you.” He wonders whether it would be, human. These are questions we may find answers to in the near future. But for now, all of us are stuck here, as mortals.

I came to this series wondering if any time would be given to a non-religious perspective on God and the afterlife; and I was not dissapointed. Throughout this first episode, Morgan infused his own perspective into the conversation. Things like:

“One form of life after death is the memory of deceased family members and friends who continue to guide us.”

“It’s human nature to fight against the finality of death. If we ourselves can’t live on after our time on earth is over, we at least want to be remembered.”

“We all live on in the memories of those we love, in those whose lives we’ve impacted in a positive manner.”

And in conclusion noting that “our desire to go beyond death has changed the world.”

The fact is that no one knows what happens to us when we die. As a naturalist I believe we are nothing more than our bodies, and when we die, when the lights of consciousness go out. That’s it. Do I fear death? Maybe a little. But this not rational, as there was nothing to fear before I was born. With Morgan, I too hope that I will live on after death; but only in the metaphorical sense of the memories people have of me — the memories of me impacting others in a positive manner.

Overall I enjoyed this premiere and look forward to the rest of the series.

February 19, 2016
'Risen' Movie Releases Today and Should Be Viewed as Fiction, Even by Christians
Next Post

April 11, 2016 Religion and the Right - Not Just a US Phenomenon
Recent Comments
5 Comments | Leave a Comment
Browse Our Archives
Follow Us!