Western religion has not been kind to gays. From the first mentions of homosexuality in the Old Testament, to the Christian Gospels, to the Quran’s retelling of Sodom and Gomorrah, it’s one thing all Abrahamic faiths have agreed on.

This Western influence has made its way around the world, to regions that typically accepted homoseuxuality as normal. Christian evangelists and missionaries have had such an impact on countries in Africa, that Uganda now has some of the harshest homophobic laws in the world.

However, even the religious right has its progressives. These individuals and groups take a different approach. While they don’t condone homosexuality, they preach tolerance of gays and lesbians, rejecting abominations like conversion therapy and treating us as regular members of their communities.

It’s a step forward, and a very brave one at that. Rabbis, pastors, imams, and even the Pope, face criticism from more extreme sectors for the progressive approach. Pope Francis, as the leader of the massive Catholic population, has taken huge chances in speaking out about gay rights.

Still, progressive religion does not yet fully understand homosexuality. The following 5 are the biggest lessons that need to be learned.

It’s not about sex 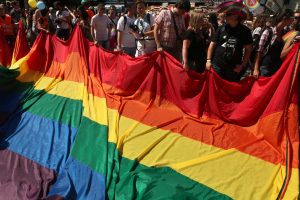 The most common refrain from tolerant religious factions is that you should judge the sin, not the sinner. Everyone commits sins, and gays are no different. Even if gays have no intention to change their behaviour, it’s no different from someone who does not observe the Sabbath, or does not pray five times a day, and so on.

But being gay is not as black and white as religion makes it. It does not simply mean you have sex with someone of the same gender. You wouldn’t consider a heterosexual romantic relationship as an “act” or “behavior”. Religion preaches the importance of love and marriage. When it comes to heteronormativity, it recognises that marriage is not just an agreement to have as much sex as possible. Same sex relationships should not be seen differently.

When the religious “judge the sin, not the sinner” they are invalidating a homosexual’s ability to have a loving, monogamous relationship. The refrain won’t stop religious heterosexuals (or gays themselves) from passing a heavy, personal judgment.

Debate rages amongst the religious over whether or not homosexuality is a choice. The more progressive religious factions accept that it is not a choice, in defense of homosexuals. But whether or not it’s a choice only matters if you consider it a sin or perversion. As a proud gay man, I no longer bother myself with the argument. Even if it is a choice, there’s no reason I should not have made that choice.

…but the debate perpetuates internalized homophobia

Being reassured that it’s not a choice makes us feel all the judgment it implies. The judgment that tells me my love is perverted and that I’m a helpless victim to this “illness”.

The unfortunate truth is that, were it a choice, 99% of homosexuals would not have chosen it. And feeling like your choice of who you love is making the best of a bad situation is pretty awful. I would not trade my boyfriend for any woman (not even Beyoncé) and I resent being told by religious leaders that they accept my sad reality.

Individuals “afflicted” with having been born gay cannot accept themselves until they see that it’s not an affliction.

I think it’s important to acknowledge that the recognition that homosexuality is not a choice has made an important difference. Conversion therapy is extremely harmful, and progressive religious groups who understand sexuality cannot be changed have worked bravely to stop it from happening.

Internalized homophobia is at the heart of many of our problems

That great sense of shame causes tremendous pain to every gay individual. Coming out is an incredibly tough choice, and can lead to problems within the family and society. But staying closeted can be much more damaging. The rate of depression and suicide in homosexuals is much higher than the rate among heterosexuals.

It also leads to difficulties in maintaining healthy relationships even for those who are fully “out”. When you have always viewed same-sex romance as something perverted, it is extremely tough to put your all into this type of relationship.

If you can’t accept it, at least speak about it

I understand that progressive religious groups have a hard time reconciling acceptance of homosexuality with their beliefs. A lot of compromise is involved, as well as some difficult soul-searching.

But the most important thing that all religions have to remember is that at least 10% of their community is probably gay.

The most common way religions deal with issues like this is by taking a position, whether it’s archaic or progressive or liberal. But while that works for the heterosexual majority, it is not enough for those actually grappling with their sexuality.

Speaking about it without ready-made answers; discussing how to make gay congregants comfortable in church; how to help students feel comfortable confronting it; how to root out homophobia in schools; figuring out a way to make the struggle easier – that is crucial. Simply explaining the rabbi’s/priest’s/imam’s position to the community only makes it harder to break the silence.

June 17, 2016 When Religions Get It Wrong, They Could At Least Apologize!
Recent Comments
0 | Leave a Comment
Browse Our Archives
get the latest from
Nonreligious
Sign up for our newsletter
POPULAR AT PATHEOS Nonreligious
1