The Buzz Behind #NormalizeAtheism: A Conversation with Mark Nebo

The Buzz Behind #NormalizeAtheism: A Conversation with Mark Nebo June 20, 2016 Kevin Davis

If you’re active in the secular community, you’ve most likely met or at least heard of Mark Nebo.  Mark and his wife Shanon are busy secular activists who have been involved in many conferences and events over the years, including the Reason Rally a few weeks ago.  I first met Mark at PASTAHCon in 2015, where he was emcee for the conference.  I was there to announce the national expansion of Young Skeptics. 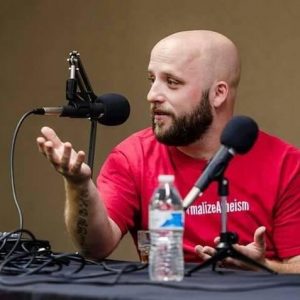 Aside from his seemingly ever-present involvement at secular events, Mark is a Navy veteran, father of two (with one more on the way), and recently kicked off something called #NormalizeAtheism.  I sat down with Mark to get more of an idea of what he’d like to accomplish, as well as get his thoughts on the secular movement as a whole.

KD:  Hi Mark, thanks for taking the time to give SecularVoices readers a better idea of what #NormalizeAtheism is all about.  So let’s start with the basics.  What is #NormalizeAtheism?  Is this an organization, a movement, a trending hashtag?  What are its goals?

MN:  #NormalizeAtheism started as just a hashtag, but after it has been used over 50,000 times, it has morphed into a bit of a movement I guess you could say. The goal, for me at least, has become to help people be confident in their non-belief and show it.

KD:  And by show it, I’ve noticed there are now #NormalizeAtheism shirts available for sale.  So aside from buying a cool t-shirt at normalizeatheism.com, what steps can we take to #NormalizeAtheism?

MN:  Do all the things you would normally do but be open about your disbelief or even your rejection of religion. Shanon and I like to talk in public about the things we do, the same as anyone else — talking to other soccer parents about going to atheist conventions and about our speaking at conferences, etc. We try to be as open about it as anyone else is about their faith/church life.

KD:  That’s great.  I agree and I think it’s important to be as out and open as possible.  We shouldn’t be hiding our lack of faith, since really, we’re at the rational position.  The burden of proof is on the religious, not us.  Speaking of Shanon, many people know the Nebo family as the faces behind Be Secular. Is #NormalizeAtheism part of Be Secular?

MN:  #NormalizeAtheism is not part of Be Secular. Be Secular is our initial effort and still our largest, but they are completely separate, as is our next effort (still a secret). Shanon is the President and Founder of Be Secular. I’m one of the founders too, but I’m pretty hands off. Shanon drives that machine.

KD:  Ok, we’ll definitely keep an eye out for the next thing you’re working on, when it’s ready.  I’d like to switch gears a little bit and get your opinion on some recent events.  It seems like ties to religion are constantly in the news, whether it’s Christian extremists protesting Target bathroom policies, police departments adding religious references to patrol cars, politicians invoking deities on the senate floor, or terrorist attacks like we recently saw at Pulse nightclub.  As an outspoken atheist who is open about discussing the dangers of organized religion, what part do you feel religion had in the recent mass shooting in Orlando? Do you think Islamism was used as a cover for what was essentially a hate crime, or do you feel the hate crime was fueled by it?

MN:  I feel like if you drew a venn diagram of guns, homophobia and religion, the Orlando shooting would be the intersection. Islam certainly teaches homophobia but so does classical Americana. Guns were the weapon, but religion ultimately lit the fuse. We do need to be careful of pitting reasons against each other though, and that’s what seems like is happening. Homophobia vs Religion vs Guns.

KD: What part can the secular movement play in preventing such tragedies? What effect can #NormalizeAtheism have?

MN:  The secular movement by and large, can and does contribute. We have had our share of issues with donation/fundraising endeavors but overall we are pretty charitable, considering we don’t have hell motivating us. #NormalizeAtheism really would be more of a support network, for people to make their comments on social media and allow them all to be collected when people use the hashtag. Preventing the tragedies? I am not sure how we go about handling that.

KD:  I think we can only hope that as secularism gains ground, religion loses its footing and religious zealots are less abundant.  But it may get worse before it gets better, since with dwindling numbers comes desperation.  Time will tell I suppose.  So with all of the conferences, secular events, and other projects you and Shanon work on throughout the year (aside from actual jobs outside the movement which many people forget most of us have), it’s safe to say you have a good feel for the secular movement and where we’re headed.  Do you feel the secular movement is gaining traction in general?  I ask because it seems respected members of the movement are having trouble avoiding controversy and scandal lately, with the likes of Sarah Morehead, Neil Carter, Richard Carrier and others being under intense scrutiny following various accusations involving their character. Is this hurting the movement, or are they merely distractions as we move forward?

MN:  Distractions. The movement is growing as we all know. We are going to have bad eggs in the bunch just like any group of people. The larger the group, the more examples of swindlers and crooks and perverts. I don’t think anyone expects any more from us than they do any other human. We really just need to focus on policing ourselves, helping those who need help and remembering that we don’t need to hide or be ashamed of ourselves.

KD:  Well said.  Mark, I want to tank you again for taking the time and I look forward to the next time we can catch up at an event!

For more info on the #NormailzeAtheism movement or to snag one of those shirts and show your pride, head to normalizeatheism.com.  To see who’s using the hashtag, just search for it on Facebook, Twitter, or your favorite social media platform, and don’t forget to use it yourself!

June 17, 2016
When Religions Get It Wrong, They Could At Least Apologize!
Next Post

June 21, 2016 Religious Morality Lacks Integrity
Recent Comments
0 | Leave a Comment
Browse Our Archives
get the latest from
Nonreligious
Sign up for our newsletter
POPULAR AT PATHEOS Nonreligious
1

The Entirely Unsurprising Sexism That Russell...
Roll to Disbelieve
Books by This Author Books by Kevin Davis