Religions tend to make black and white laws about moral issues that really exist in shades of grey:  matters of marriage, divorce, sexuality, abortion, contraception, euthanasia, IVF, stem cell research. It constantly amazes me that in the Catholic Church, “celibate” priests and nuns offer authoritative advice on these sexual matters, of which they are supposed to have no practical experience. Where does the advice come from? The Bible? Well if it is in there it must be true (read with sarcasm). The Bible contradicts itself many times and is so full of odd and ridiculous stories, with very strange versions of morality, that it begs the question, why would you turn to that over common sense? 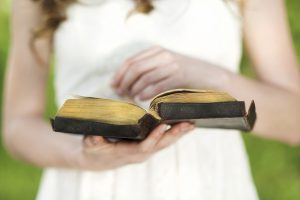 Next I thought I would give Paul of the New Testament a chance. He writes of love beautifully and is often recited at weddings. Paul is (surprise, surprise) anti-woman too. He says it is a sin for a man to enter a house of God with his head covered, but it is also a sin for a woman to enter a church with her head uncovered. Why? because women were made for men and not men for women. The hierarchy is set – the order is God, man, woman and don’t you forget it. With this distinction, Paul clearly breaches modern discrimination laws.

Also look at the New Testament where Jesus protects the adulterous woman from being stoned. It seems he wasn’t saying adultery was OK, but just that we are all “sinners” and that perhaps the punishment was too harsh. Well I reject being called a sinner. We are not all sinners; we are simply human. However, I do agree that stoning someone to death is quite often a much worse crime than the one of which the offender has been accused.

Back to morality. If we were to take the Bible’s word as moral law, at times it says faith is important and all that one needs. And elsewhere, the Bible states that faith without works is nothing. A contradiction like this in the Bible makes me wonder, “who is supposed to go heaven?” For the person who might kill, rape, steal and then repent — they can say they’re sorry and show they have faith and all is forgiven?  Or perhaps it’s the non-believer, a scientist who works hard to cure disease, is fair, gives blood, is kind etc.?  I think I know who is more “moral.”

Having a sacrificial lamb, such as Jesus, to die and take away sins does not seem fair, nor just. Why should he do that? And how is it fair at all for people to then say, “Oh well I can do what I want, as I have been redeemed.” I don’t want to shirk responsibility for my actions and I believe this belief system does exactly that. Accountability is zero.

Personally, I can only choose to live in a way which I think is good and “moral.” Religious systems seem to lack a certain justice, and if you can’t be good for good’s sake, how do you know what you are doing is truly good? Our judicial laws are separate from biblical and religious laws for good reason. Judicial law has evolved to suit modern times, which only highlights the archaic nature of some of these ancient scriptures.

June 20, 2016
The Buzz Behind #NormalizeAtheism: A Conversation with Mark Nebo
Next Post

June 27, 2016 God is Not an Acceptable Reason in a Secular Society
Recent Comments
0 | Leave a Comment
Browse Our Archives
get the latest from
Nonreligious
Sign up for our newsletter
POPULAR AT PATHEOS Nonreligious
1