God is Not an Acceptable Reason in a Secular Society

God is Not an Acceptable Reason in a Secular Society June 27, 2016 Matt Young

In the United States we enjoy the “freedom of religion.” This freedom to believe whatever one wants to about divine beings, or to not believe at all, is an essential part of our secular democracy. But many religious people have a hard time keeping their religion to themselves. They do and say things in the public arena that would usually be considered unacceptable. And when they do said things, they often use their god and the god’s apparent commands as justification for their actions. This is simply not a good enough reason in a secular society.

For instance, fundamentalist Christians want to keep members of the transgender community out of public restrooms. What reasons do they provide when questioned about treating transgender people differently from the rest of society? Most of the time, the answer is simply, “God said so.” Period, end of sentence, no further reasons necessary. They don’t want to have a conversation about it, and reasoning from anything  other than the Bible is quickly dismissed as coming from “the mouth of Satan.”

The problem with this is that we don’t live in a theocracy (thank goodness) — we live in a secular democracy. In a secular society, one has to bring sound reason and evidence to the table for discussion. And a Christian’s belief that their god said something is not good enough. It may be a good enough reason for the individual religious person in the privacy of their own home, but it’s not a good enough reason for the rest of us; and in a liberal society, a private “god reason” does not trump the collective human reasons. 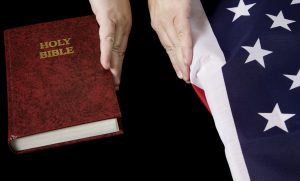 I want an America in which everyone is free to practice or not practice a religion in private as well as in public; but when it comes to how we treat one another, and how we make decisions for our society together, the only acceptable orientation is towards equality. A religion can affect as many aspects of a person’s individual life as they want it to. But when it comes to their interactions with the rest of us human beings, the only actions a religious person is allowed to take are ones of kindness and fairness. A religious reason is not an acceptable excuse for discriminating against other people. Religion is not an excuse for treating others negatively because there is no excuse for mistreating others in our modern society.

So let’s remind our friends, family, and political representatives, that a secular society is one of equality and fairness. And while someone is permitted to believe and act however they want in private, when they enter the public sphere, their religious reasons are not an excuse for abandoning equality and fairness.

June 28, 2016 No, That's Not What 'Free Speech' Means
Recent Comments
0 | Leave a Comment
"Great Reading this Article!Matrix MLM Software providers"
infinitemlm Rick Santorum Shows Us Again How ..."
"If you truly want a child to be an independent thinker like it or not ..."
Brianna LaPoint Anxiety Alert: My Secular Son is ..."
"This is still here? I guess the internet is forever."
Teto85 Pastor Greg Locke is Pissed: People ..."
"The Catholics grind baby bones to make flour for the communion wafers. /s"
E.A. Blair Pastor Greg Locke is Pissed: People ..."
Browse Our Archives
get the latest from
Nonreligious
Sign up for our newsletter
POPULAR AT PATHEOS Nonreligious
1

Deconversion: Brett McCracken Gets It Completely...
Roll to Disbelieve
Books by This Author Books by Kevin Davis