MAGA Mail Bomber Just the Tip of the Conspiracy Iceberg

On October 26, federal authorities arrested Cesar Altieri Sayoc in Plantation, Florida in connection with mail bombs sent to outspoken critics of Donald Trump. But Sayoc, dubbed the MAGA Mail Bomber, or MAGAbomber for short, was just one of the many lunatics we discovered that day.

As soon as the news broke, the right-wing conspiracy theorists came out in droves to offer their own far-fetched explanations in an effort to deflect the blame from Trump and his rhetoric and place it squarely on the left — and especially on the targets of Sayoc’s bombs.

On virtually any comment-enabled website that reported the news of the MAGAbomber’s capture, we find dozens, if not hundreds or even thousands of readers sounding off about a variety of conspiracy theories designed to make the GOP “look bad before the election.” Rather than just disavow the actions of one disturbed and misguided man, these seemingly brainwashed right-wingers go the extra mile to ignore the evidence in front of them and make up outlandish explanations in an effort to keep #winning at all costs.

For example, let’s look at the live coverage from conservative cesspool Breitbart. On Friday, they shared live updates as the arrest was unfolding on their website: Live Updates: FBI Arrests Man in Connection to Mail Bomb Campaign. It’s a fairly straightforward news piece with minute-by-minute updates posted as they happened. What’s really telling is in the comments.

At the time of this article, there are nearly 43,000 comments on the Breitbart piece. After reading through a great deal of them, I can honestly report that the majority of commenters support some sort of conspiracy theory involving the left, rather than the evidence in front of their faces — a disturbed man with a history of criminal activity, threats, pro-Trump and anti-Democrat social media posts, and a van covered in pro-Trump propaganda. Here are some examples: 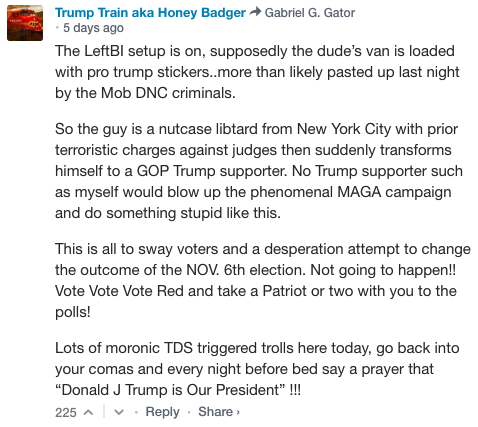 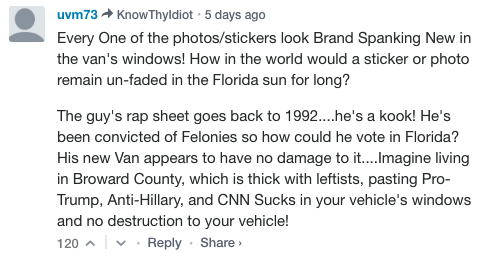 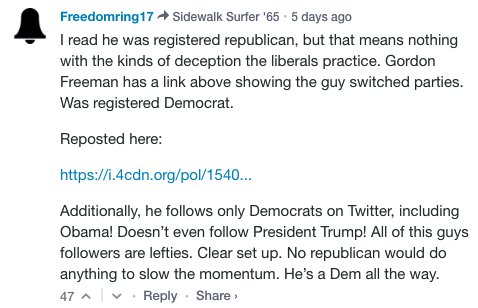 And then there’s this guy, who’s obviously been a staunch conspiracy theorist since the 1960s.

And these conspiracy theories from the right are making their way into mainstream society. In the case of the MAGAbomber, conservative pundits like Rush Limbaugh and Geraldo Rivera even bought in, along with Donald Trump Jr.

I’m not just sharing these to give us something to shake our heads at or create a slapping symphony of facepalms. We need to be aware that the MAGAbomber is just the tip of the iceberg here. Conspiracy theories aren’t just fun and games anymore. They’re causing damage at an alarming rate. We’ve come a long way from speculating about Area 51, the Kennedy assassination, or faking the moon landing. Today’s conspiracy theories are often politically motivated and have actionable militant components. We’ve moved on to 9/11 truthers, flat-earthers, mass shooting deniers, New World Order, Illuminati, and more. These theories, combined with a person’s diminished mental state, can result in deadly consequences as we nearly witnessed with Pizzagate.

So what can we do about it? Here are a few suggestions.

I’m a realist. I know these suggestions aren’t going to change the world or solve the entire problem, but we all need to do what we can to squash this stuff when we see it. An informed populace is a better populace. And until we can rid our own circles of misinformation, we can’t be sure our friends and families are voting with a clear head. Every little bit helps.

Do you have other suggestions? Let us know in the comments. 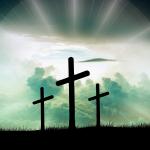 October 17, 2018
Evangelicals are Becoming More Liberal and Leaders are Panicking
Next Post 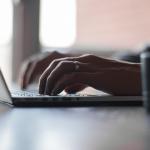 November 1, 2018 Mailbag: A Christian Responded to a Call for Guest Writers. I Replied.
Recent Comments
5 Comments | Leave a Comment
"Great Reading this Article!Matrix MLM Software providers"
infinitemlm Rick Santorum Shows Us Again How ..."
"If you truly want a child to be an independent thinker like it or not ..."
Brianna LaPoint Anxiety Alert: My Secular Son is ..."
"This is still here? I guess the internet is forever."
Teto85 Pastor Greg Locke is Pissed: People ..."
"The Catholics grind baby bones to make flour for the communion wafers. /s"
E.A. Blair Pastor Greg Locke is Pissed: People ..."
Browse Our Archives
get the latest from
Nonreligious
Sign up for our newsletter
POPULAR AT PATHEOS Nonreligious
1