They’re at it again. The unsurprisingly small organization called Republican Atheists has crafted a Facebook post about LGBTQ Pride Month that has its own followers scratching their heads.

In celebration of Pride Month, last week the Wisconsin capitol building raised a rainbow pride flag under the American flag for the first time in its history. Along with that move, Wisconsin Governor Tony Evers issued an executive order to keep the flag flying for the remainder of Pride Month. To most, this is a non-issue. It’s a month out of the year that’s designated to celebrate diversity and symbolize recognition and acceptance of a group of people that had previously been largely shunned by society for decades. But societies evolve and many times correct themselves as people become more enlightened. LGBTQ Pride Month is a good example of that. While we certainly still have issues with discrimination and maltreatment of the gay community, in a broader sense societal views of LGBTQ persons are progressing.

That doesn’t seem true with the leadership of Republican Atheists. Yesterday, the organization posted the following message on Facebook about Wisconsin’s pride flag. 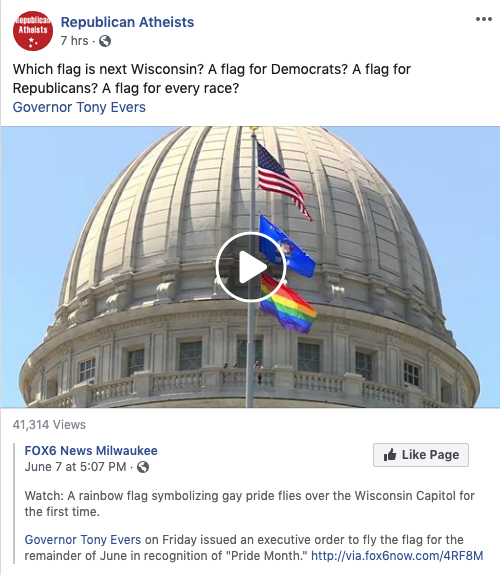 If I didn’t know any better, I would have guessed this post fit better on an Evangelical church’s Facebook page. What does Republican Atheists have against the LGBTQ community? The spirit of this post seems in line with the “All lives matter” crowd or even the “Where is straight pride month?” idiots. This whole “If it’s not about me, I’m against it” mentality is a sign of the wearing away of empathy in our culture. Why not celebrate diversity and raise up those who have a history of being treated poorly and unfairly in our country? Why is that a problem for so many people?

The real troubling thing for me is that this post was made by self-proclaimed atheists (or presumably the president of said group). What issue would an atheist have with LGBTQ Pride Month? The vast majority of pushback I’ve seen for events like these come from the religious who base their prejudice on holy books or religious doctrine. This is honestly the first time I’ve seen public criticism of an LGBTQ event from a person or group who is openly secular. The hostility here is alarming.

Thankfully, Republican Atheists’ own members/followers/readers are calling out the bigotry in the comments:

That’s refreshing. It’s nice to see people who are either Republican or follow a Republican page stick up for the LBGTQ community. Republican Atheists has yet to respond to any of these comments and probably won’t. The only defense I could imagine them coming back with is that the politically-active gay community is largely liberal/progressive, so they see this as the government favoring the left. But to have that view they’d have to ignore the “In God We Trust” mottos plastered all over government property — a recurring victory of the Religious Right displayed all around us. 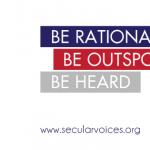 May 28, 2019
New Direction and Main Focus for SecularVoices
Next Post 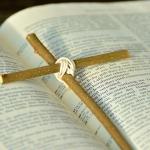 June 24, 2019 Christian Bible Publishers Ask for Exemption from Trump's Tariffs
Recent Comments
28 Comments | Leave a Comment
"Great Reading this Article!Matrix MLM Software providers"
infinitemlm Rick Santorum Shows Us Again How ..."
"If you truly want a child to be an independent thinker like it or not ..."
Brianna LaPoint Anxiety Alert: My Secular Son is ..."
"This is still here? I guess the internet is forever."
Teto85 Pastor Greg Locke is Pissed: People ..."
"The Catholics grind baby bones to make flour for the communion wafers. /s"
E.A. Blair Pastor Greg Locke is Pissed: People ..."
Browse Our Archives
get the latest from
Nonreligious
Sign up for our newsletter
POPULAR AT PATHEOS Nonreligious
1