Authority: does it deserve worship? 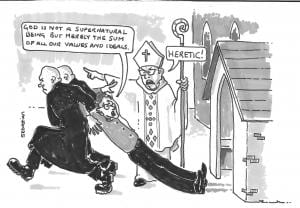 “The church doesn’t like the people to grow up, because you can’t control grown-ups. That’s why we talk about being ‘born-again’. When you’re born again, you’re still a child…”

It’s very noticeable to persons like myself, who have a science background, how important authority is to the religious. Scientists, on the contrary, have a healthy disregard for status and a huge respect for evidence. I’ll just give you a couple of examples.

How high you have risen up the greasy pole of science academia counts for very little. Richard Feynman put this well when he said,

Meanwhile, in the theists’ world, worship of authority is de rigueur. Religions have a hierarchical structure, like military organisations, with disrespect of rank being a punishable offence. Bishops can ruin the lives of subordinates for disagreeing with them, as Sebastian’s cartoon shows.

This is most noticeable in debates, such as I have with believers. I produce evidence and they produce quotes from scriptures and the opinions of their ‘authorities’, often including, if they are Christians, fairy tale author CS Lewis.

Of course, their Commander in Chief is invisible and, for all we know, absent so, as in the case of a fallen general, his self-proclaimed Earthly representatives can promote themselves to fill the vacancy! Spong went on to say, “People don’t need to be ‘born again’, they need to grow-up, they need to accept responsibility for themselves and the world.”

You can see this clip of the interview here https://youtu.be/eyjUFRNbQPY

May 17, 2020 The Theist's Perspective?
Browse Our Archives
Follow Us!

Nonreligious
Religion even divides the Religious
Secular World by AAI

Nonreligious
The clothes have no Emperor!
Secular World by AAI

Nonreligious
The Theist's concept of 'Naturalism' is wrong...
Secular World by AAI

Nonreligious
Do you ever Doubt your Faith?
Secular World by AAI
TRENDING AT PATHEOS Nonreligious

FFRF responds to Trump, Congress and the Supremes
A lot of our work at the Freedom From Religion Foundation during...
view all Nonreligious blogs
Copyright 2008-2020, Patheos. All rights reserved.