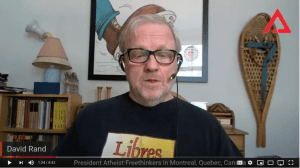 The Quebec government recently enacted Bill 21, which adopts secularism in that Canadian province.

Secularism guarantees the separation of the government of a state from religious organisations. It protects the rights of people to worship whichever religion they wish while preventing any religion from exerting control over decision making or law making.

Bill 21 impedes religious privilege and fundamentalism. It is a necessary precautionary measure to prevent fundamentalists from gaining further ground in state institutions and to make sure that undue privileges are not granted to certain belief systems.

One of the stipulations of Bill 21 is that employees of the government should not display religious symbols while at work. That would tacitly imply endorsement by the official authority of the Quebec province. This ban includes prosecutors, judges, prison guards, police and school teachers. It does not discriminate on grounds of religion – it applies equally to all religious symbols.

This is particularly important in schools where symbols of a religion being overtly paraded by their teachers may give children the impression that membership confers some sort of ‘purity’ or ‘moral high ground’ over those who do not belong.

Quebec law already prohibits the visible display of allegiance to a political party by workers for similar reasons: governments should be neutral in these matters.

Many nations already have secularism as part of their constitution including France and India. Bill 21 is an attempt to bring Quebec up to speed with the rest of the enlightened world.

Unfortunately, actions are being brought, by Muslim activists and others, to prevent this Act from being adopted or, even, to have it repealed.

Join the campaign to prevent the denial of secularism in Quebec here https://www.atheology.ca/blog-110/

Pic and video property of AAI

May 8, 2020 President of Humanist Association of Nigeria arrested
Browse Our Archives
get the latest from
Nonreligious
Sign up for our newsletter
POPULAR AT PATHEOS Nonreligious
1