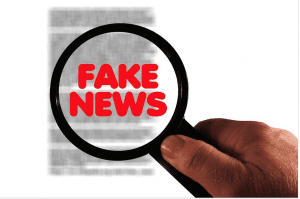 Starting a smear campaign will give you a much better opportunity to ‘go viral’ than reporting the truth. In this day and age of social media, real news is rarely sensational enough to get shared – fake news gets much more coverage.

This is not something to be proud of, but it seems to be human nature to want to hear dirt about people and organisations, particularly if they are perceived to be famous or in positions of power. A special problem with this tendency is there is no forgiveness anymore. The permanence of the internet database means that indiscretions committed decades ago can haunt an individual who has long since reformed or, worse still, lies that were published years back can be dredged up and recycled forever.

What would you say if, for example, some individuals who worked for the United Nations made false allegations about key people there and spread these lies to all and sundry? What if some people believed their smear campaign and resigned with them? Then, just suppose that shortly after, this small group of malicious and misled folk set up a rival organisation and called it the Nations Union? Not content with that, what if they continued their smear campaign in an attempt to discredit the UN and supplant it with their own newly formed, supposedly pure as the driven snow, ‘alternative organisation’?

Now this may sound far-fetched in the context of the United Nations, but it is exactly what has happened to another august body: Atheist Alliance International. OK, we are not exactly on a par with the UN, but we have been a registered charity for almost twenty nine years, we have consultative status with the UN and we have been given a Gold rating for “demonstrating our commitment to transparency” by Guide Star, the charity rating service.

May 8, 2020
President of Humanist Association of Nigeria arrested
Next Post

May 10, 2020 Certain Knowledge?
Browse Our Archives
get the latest from
Secular World by AAI
Sign up for our newsletter
POPULAR AT PATHEOS Nonreligious
1