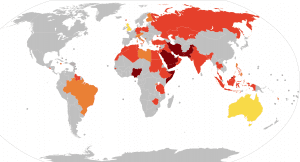 Blasphemy is hitting the news again, for two reasons: Scotland is considering repealing the ancient law, and a humanist leader in Nigeria, Mubarak Bala, has been detained in police custody for months on allegations of insulting the prophet. The countries that still have blasphemy laws are shown on the map.

Laws have been created to address malicious activity and grievances. A person who feels mistreated can inform the police who should decide whether they have a case or not. If the decision is positive, an arrest may be made and a suspect may be charged with an offence. Then a hearing is scheduled, both sides are listened to and a decision is made. If the judgement is guilty, a sanction is pronounced, the convict meets the sentence and the victim is appeased. Justice has been done. That’s all very well and good, but the process can be abused…

Notice that the characters in the above account are all living humans. It would make no sense to apply that process to Mickey Mouse, would it… But that’s exactly what blasphemy law seeks to do.

Since neither Mickey Mouse nor god are capable of speaking for themselves, human agents have to take on the ‘responsibility’ for ‘them’. Are they the ones who really need the protection then? Is it their claim, their doctrine, their status that is being threatened? What do you think?

Recognizing that blasphemy, along with heresy and apostasy law, is not designed for the benefit of all society but for the benefit of specific religious organizations, many of the less religious states have already repealed these ancient ‘crimes’. Ireland came to its senses in January 2020 and Scotland now has a Bill before their parliament. The Scottish Bill is worrying. It was proposed by a Muslim and appears to restrict freedom of speech more generally instead of simply removing blasphemy from the statute book…

Making blasphemy a punishable offence is a nonsense until evidence for the existence of a creator deity, one so insecure that he has a snowflake attitude towards insults, is revealed.

June 23, 2020 Quebec Law being challenged
Browse Our Archives
get the latest from
Secular World by AAI
Sign up for our newsletter
POPULAR AT PATHEOS Nonreligious
1

Would You Rather Be Proven Right or Wrong?
Most of the knowledge in our heads could be obsolete in generations....
view all Nonreligious blogs
Copyright 2008-2020, Patheos. All rights reserved.