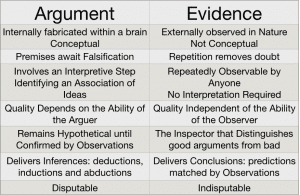 Jim Dorans, who guest wrote a recent blog on this site‎ (link below), very effectively debunked some of the arguments for god. I’m going to go one further and make a point that few theists understand: argument is NOT evidence.

Apologists like William Lane Craig, Jonathan McClatchie, David Salako, John Lennox and Zach Ardern seek to justify their belief in the existence of their god. They would like there to be evidence. After all, they’ve seen how powerful evidence is in the field of science. They even use the technological products of scientific discoveries, such as computers and video cameras, to express their views…

Some religious denominations even reveal this wishful thinking by incorporating sciencey sounding words into their very name! I’m thinking of Christian Scientists, Christian Research Institute, Islamic Research and Education Association and, best of all, Scientology!

I recently found a short video by Lane-Craig in which he claims to show ‘How an Ordinary Christian Can Silence an Atheist’ see here: https://youtu.be/QBPYuFhDy7g

It’s fun to watch because he starts out talking about providing evidence then, at 1:10, he stops using the word ‘evidence’ and switches to the word ‘arguments’. At 1:42 he actually says,

“When people ask me, ‘There’s no evidence for god’s existence’. I say, ‘Well sure there is’. They say, ‘Like what?’ ‘I typically just list about five arguments’”!

He obviously thinks that ‘argument’ is a synonym for ‘evidence’!

We do use argument in science: to justify hypotheses, to make a case for carrying out an investigation and to design rigorous experiments. But that’s pretty much the end of the usefulness of argument. Once repeatedly observable evidence is in, we can stop arguing about it, at least until we discover some new evidence that casts doubt on our conclusions.

Here’s an example of how we use argument in science: Frank Drake calculated that, using information about the universe (approximately two hundred billion galaxies in the known universe, each with about two hundred billion stars and probably eight hundred billion planets) and putting it together with the information that the cosmos began 13.8 billion years ago, it is extremely likely that some other intelligent life has evolved elsewhere in the universe. That’s a very strong argument for Extra-terrestrial intelligence, because it is backed by statistics.

Is that argument a closed case then? Does it prove the existence of ET?

But, since the reasoning behind the argument for the existence of ET is based on evidence, it’s a hypothesis worthy of investigating for matching observations in the Natural Realm.

That’s why we’ve been listening for signals in the Search for Extra-Terrestrial Intelligence (SETI) since the 1960s. Why are we carrying out that investigation? Because the statistical argument supports a hypothesis about the existence of ET that can, and should, be examined for evidence. It’s a question we would like to have answered.

Even if the arguments for the Christian God were sound, even if they were based on empirical evidence like the ET hypothesis, God’s possible existence is non-investigable. No telescope can detect him and therefore we can collect no observations, so his proposed existence doesn’t even qualify as a scientific hypothesis. It’s just a wild guess.

An argument is not evidence, it’s just an inference.

An argument needs evidence to become a conclusion.

June 12, 2020 William Lane Craig Debunked
Browse Our Archives
get the latest from
Secular World by AAI
Sign up for our newsletter
POPULAR AT PATHEOS Nonreligious
1

John Ortberg: The Scandal That Just...
Roll to Disbelieve
Related posts from Secular World by AAI

Nonreligious
Someone has to blow our trumpet!
Secular World by AAI

Nonreligious
Is there such a thing as 'Proof'?
Secular World by AAI 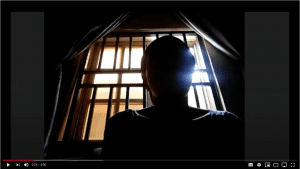