The Pandemic Doesn’t Exclude a Cruel God, But It Precludes a Merciful One…

The Pandemic Doesn’t Exclude a Cruel God, But It Precludes a Merciful One… September 15, 2020 John Richards 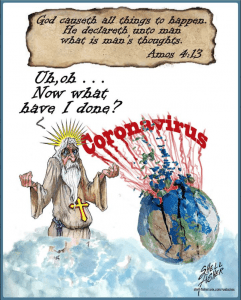 We should ask him:

If Pence answers that nature produced the virus, follow-up questions should be:

The bizarre pandemic gripping the world raises the age-old philosophical dilemma called “the problem of evil” – which asks why a supposedly all-loving god does nothing to stop horrors such as diseases, tsunamis, earthquakes, hurricanes and the like.  If there’s an all-merciful father-creator, why did he make breast cancer, childhood leukemia, cerebral palsy, natural disasters and predator animals that rip peaceful grazers apart?

Ever since Ancient Greece, priests and theologians have been flummoxed, unable to answer this enigma.  In fact, a whole field of argument called theodicy arose in a futile attempt to solve it.

I think theodicy should be called “the idiocy” because there’s only one possible explanation, which is obvious to intelligent, scientific-minded people: The all-loving god proclaimed by churches cannot exist.  Logic doesn’t exclude a cruel god, but it precludes a merciful one.

“A pandemic sharpens the permanent questions of theodicy, the debates over whether it’s reasonable to believe in a good and loving God in a world so rife with misery.”

Absurdly, Douthat contends:  “Meaningless suffering is the goal of the devil, and bringing meaning out of suffering is the saving work of God.” He avoids the glaring question:  Is God too weak to halt the devil’s work?  Douthat’s answer is just laughable.

Similarly, in Time magazine, Anglican theologian N.T. Wright dodged the question and said that, instead of seeking explanations, people should “recover the biblical tradition of lament.”  Which could be interpreted:  Don’t ask why God is killing multitudes – just lament about it.

The truth stares everyone in the face:  The pandemic proves that no compassionate god can exist.  End of discussion. The idiocy of theodicy can do nothing to refute this clear logical conclusion.

To sum up:  Why is God letting vast numbers of innocent people die in agony?  Several answers are possible:  He’s helpless to stop it.  He just doesn’t care.  He reverted to Old Testament mode as a wrathful destroyer. He doesn’t exist.

(Haught is editor emeritus of West Virginia’s largest newspaper, The Charleston Gazette-Mail, and a senior editor of Free Inquiry magazine.  He has written 12 books and 150 magazine essays.)

September 16, 2020 Intolerant Religious Conservatism Dates Back to the Pilgrims
Browse Our Archives
get the latest from
Secular World by AAI
Sign up for our newsletter
POPULAR AT PATHEOS Nonreligious
1

Were the Sacrifices Worth it?
No Longer Quivering
Related posts from Secular World by AAI

Nonreligious
I Dunno, Therefore My Godunnit!
Secular World by AAI

Nonreligious
The Conflict Between Religion and Science...
Secular World by AAI

An Infidel Reads Sūrah 6
This is the 30th part of this series, reading The Qur’an; A New...
view all Nonreligious blogs
Copyright 2008-2020, Patheos. All rights reserved.