What is the meaning of life?

What is the meaning of life? September 13, 2020 John Richards 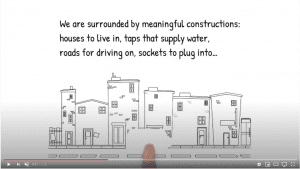 “What is the meaning of life” is not just a question. It is also a statement, because it contains an assumption. It’s a trick question like “When did you stop beating your wife?”

What reason does the questioner have to tacitly claim that life should have a meaning? If you’ve got a spare 90 seconds, take a look at my video – just click the pic.

My guest blogger, Jim Haught, has something to say about this too:

Young seekers of truth go through a phase of wondering whether life has any discernible meaning. Why are we here? Why does the universe exist? Is there a purpose to it all? This is the ultimate question, overarching all others.

The seekers usually plunge into philosophy, and spend years sweating over “being” and “essence” – and quibbling over how the mind obtains knowledge – and how we determine reality – and how language shapes our comprehension. In the end, most of them emerge (as I did) with no better answer than when they began – and a feeling that they wasted a lot of time and effort. Omar Khayyam felt the same way 900 years ago:

Myself when young did eagerly frequent

About it and about, but evermore

Came out by the same door as in I went.

However, despite this futility, I think intelligent people can address the meaning-of-life question sensibly, without bogging down in philosophical stewing and hair-splitting. That’s what I’d like to do now: just spell out what’s knowable, as I see it. The following is my personal, amateur view.

First, 90 percent of humanity – the religious believers – needn’t ask the meaning of life. Churches, mosques and temples tell them the answer. Priests and scriptures say a magical, invisible god created the universe, and put people here to be tested – and set behavior rules for us to follow – and created a heaven to reward the rule-followers after they die – and a hell to torture the rule-breakers – etc. This supernatural explanation, or some other mystical version, is accepted by the vast preponderance of the species.

Therefore, we unsure people are doomed to be seekers, always searching for a meaning to life, but never quite finding one. I’ve been going through it for half a century. Now, I think I can declare that there are two clear answers: (1) Life has no meaning. (2) Life has a thousand meanings.

First, the lack of meaning: As for an ultimate purpose or transcending moral order, all the great thinkers since ancient Greece have failed to find one. The best philosophical minds have dug into this for 25 centuries, without success. There have been endless suggestions, but no clear answer.

Martin Heidegger concluded that we are doomed to live our whole lives and die without knowing why we’re here. That’s existentialism: All we can really know is that we and the material world exist.

September 14, 2020 To G or not to g, that is the question...
Browse Our Archives
get the latest from
Secular World by AAI
Sign up for our newsletter
POPULAR AT PATHEOS Nonreligious
1

Were the Sacrifices Worth it?
No Longer Quivering
Related posts from Secular World by AAI

Nonreligious
I Dunno, Therefore My Godunnit!
Secular World by AAI

Nonreligious
The Conflict Between Religion and Science...
Secular World by AAI
TRENDING AT PATHEOS Nonreligious

Report: Trump Mocks Christians, But Admires Pastors Who...
"They're All Hustlers": Trump mocks Christians for being superstitious and ignorant, but...
view all Nonreligious blogs
Copyright 2008-2020, Patheos. All rights reserved.