Is Everything in the Bible True?

Is Everything in the Bible True? November 19, 2020 John Richards 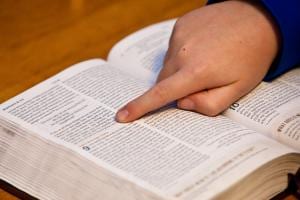 When I’m corresponding with Creationists, they don’t want to defend their claim of creation, they want to spend their time trying to rubbish evolution.

What they actually do is reveal their terrible ignorance of science and I have to spend hours trying to educate them in the not very conducive to teaching medium of Facebook or the YouTube comments section.

The things they don’t understand are legion. It includes radiometric dating, fossilization, deep time, the origin of sedimentary rocks and the geological column, genetics, mutation, speciation, extinction and on and on…

When I turn the tables and ask them a question like, for example, “What is the evidence for Creation?” they either go strangely quiet or point to the Bible.

Then I adopt one of two tactics.

Firstly I ask them “Is everything in the Bible true?”

However they reply, the follow up question is the killer.

If they say “Yes”, I ask them if they believe their god drowned the whole of humanity, apart from Noah’s family, in the great flood and do they condone such behavior as moral?

The second tactic consists of pointing out that, if they had been born in Saudi Arabia, they would be revering another scripture, the Qur’an, instead!

Of course, no religious book provides any evidence. They are all just accounts – stories.

However, the telephone directory and science textbooks do contain evidence.

The information in those books, their “testimony” in theistic language, is testable.

Just dial a number that’s registered in the telephone directory and see if whoever picks up answers to the name given. Just repeat the experiments described in the science textbook.

Testable testimony, that’s what we want.

Narrative is not evidence, unless the story of The Emperor’s New Clothes is evidence too…

Image by ambermb from Pixabay

November 20, 2020 ET vs God
Browse Our Archives
get the latest from
Secular World by AAI
Sign up for our newsletter
POPULAR AT PATHEOS Nonreligious
1