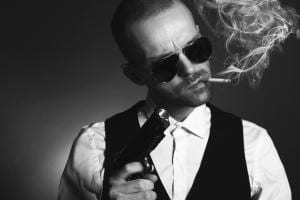 It was in the story of the ‘Garden of Eden’ that the concept of ‘original sin’ was invented. This is the  notion that the ‘crime’ of one mother could tarnish the reputation of all the offspring of every subsequent generation. We don’t have to be personally guilty, we don’t have to be caught, charged, tried and sentenced; we are convicted by birth!

It’s an idea that serves Christianity very well because it makes the claim that we all need to seek forgiveness, from the moment we are born, by submitting to the control of priests or pastors. We are in a constant situation of having to pay compensation for ‘Eve’s’ disobedient ‘apple eating’!

This is an infinite fine apparently; a debt that can never be terminated.

In fact it grows as the population grows! The bigger the Christian congregation, the larger the number of the convicted, the greater the income from offerings! Hence the missionaries, megachurches and televangelists. It’s a good business.

Yet still the prospect of eternal suffering in Hell does not recede at all. It’s a ‘guilt’ that can never be forgiven, never be absolved. Unlike a prisoner who is released having settled his debt with society, our ‘debt to god’ can never be repaid; it has an endless sentence: permanent incarceration.

Doesn’t that sound like a protection racket to you? Can’t you imagine a gangster uttering the veiled threat, “Nice afterlife you’ve got there, be a shame to spoil it!”

Which reminds me of colonialism. Now, I grant you that some appalling atrocities were historically committed, but they were not done by me. I had nothing to do with them. I don’t even have any evidence that my own ancestors were personally involved.

Nevertheless, because of my nationality and the colour of my skin, two characteristics that I’ve had absolutely no control over, some regard me as a suitable target to blame for policies and actions carried out three hundred years ago.

Of course I don’t meet this attitude from atheists hailing from the colonised lands but, to Christians, this is a ‘responsibility’ that I can never escape, nor can my children or my children’s children and so on…

I suppose I have remote ancestors to blame: not only did they commit the atrocities, but they gave the colonised people the very Bibles that planted this idea of retribution passing down the generations into their heads!

November 13, 2020 ‘Mission from God’ killer dies
Browse Our Archives
get the latest from
Secular World by AAI
Sign up for our newsletter
POPULAR AT PATHEOS Nonreligious
1

Afterlife: How Captain Cassidy Let Go of a...
Over the past day or so, a lot of people have taken...
view all Nonreligious blogs
Copyright 2008-2020, Patheos. All rights reserved.