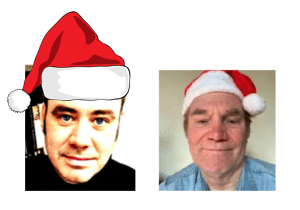 Come and ask questions! It will be live on our YouTube channel  https://www.youtube.com/channel/UCqyZa-PAPMzTU21xufNpf on Saturday 19th December at 21:00 UK time, 4pm NY, 12 noon Pacific, and 08:00 Sydney time on Sunday 20th December.

The rest of this article is from an Editorial about Christmas that I wrote for AAI’s journal, Secular World, back in December 2018. See the whole magazine here  https://www.atheistalliance.org/wp-content/uploads/2019/01/SW-DECEMBER-2018-4-compressed.pdf

Once upon a time, Saturnalia was just an innocent northern hemisphere midwinter festival when we all decorated our homes with holly and ivy to celebrate the lengthening of the days that heralded the imminent return of spring with its promise of fresh food: delicious eggs and bunnies!

Around two millennia ago, the Romans, then European bosses, adopted Christianity as the state religion and imposed it on all of their conquered territories. (Here’s a tip: when you impose a religion on a population, it’s always easier to merge it with existing customs, that way you annoy fewer people.)

So, Saturnalia was snatched and morphed into Christmas. In the same way, the spring festival was commandeered for the crucifixion. (Note how sweet it is that Jesus’ execution event once belonged to Eostre, Goddess of New Life!)

Sadly, what was previously a joyous occasion (Hip, hip hooray, spring is on the way!) has become a contentious time of year in our present multifaith world. Why is that?

Well, it’s because religions are merely belief systems based on supposed ‘gods’. Unlike the change in day-length, which is an indisputable fact, beliefs are just opinions about the unknown, so they need defending. Claims that are not backed by evidence can only be supported argumentatively; the lack of evidence means that they need arguments, indeed, they only have arguments.

This puts us immediately into the arena of disagreement: “My god is the true one, yours is false and questioning my beliefs will be deemed offensive”. The next thing that happens is dogmatic religious leaders feel entitled to enforce so-called crimes of blasphemy, heresy and apostasy to protect their doctrines, sometimes with cruel punishments including execution.

Also, non-believers are demonized with names like ‘heathen’, ‘gentile’ and ‘infidel’. Given that faiths are historically territorial, conflict is the inevitable result.

Non-believers sometimes get asked, “What do you do at Christmas?” As if we have no permission to celebrate the time of the year that has been stolen by the Christians for their god.

So, what do we do at Christmas? We do what the dictionary tells us to do:

Saturnalia: the ancient Roman festival of Saturn in December, a period of general merrymaking and an occasion of wild revelry or indulgence.

We like to meet up with family and friends, to eat, drink and be merry.

December 11, 2020
Debunking the Answers in Genesis Pastor
Next Post

December 13, 2020 It was Raining and...
Browse Our Archives
get the latest from
Nonreligious
Sign up for our newsletter
POPULAR AT PATHEOS Nonreligious
1