A-theism is Not a Thing

A-theism is Not a Thing February 1, 2021 John Richards 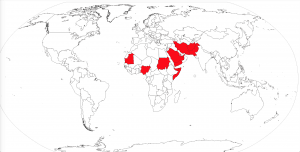 I have to keep revisiting this theme…

Some people don’t like Atheist Alliance International because our name includes the word ‘a-theism’.

They think we are militants who wish to impose our ideological standards on them.  This has been adopted to such an extent that, in some places, a-theists are persecuted and must remain ‘in the closet’ for their own safety.  There are seven countries in the world where coming out as an a-theist risks execution (red on map) and six more where imprisonment or lashing is likely.

Too many people have swallowed the propaganda that claims a-theists are immoral, purposeless, god-haters.

A-theism may sound like an ideology because of its ‘-ism’ ending but it’s not.  There is no doctrine, there are no values or principles attached to a-theism, it merely inherited the ending from its parent word ‘theism’.

A-theism is just not believing the claims of theists that they have a god who controls everything and that we should worship it.  That’s all.

The only reason ‘a-theist’ is in the AAI name is because it is in the dictionary and it would be foolish to pretend otherwise.

In fact, there is no more reason for the word ‘a-theist’ than there is for a word ‘a-fairy-ist’ unless you are believer.

If you are a believer, you can use the label ‘a-theist’ to identify your targets, to divide them off from your flock, and to get them victimised.

Please remember, all innocent babies are born a-theists, and that’s how we should be entitled to stay.

PS. I’m about to go live with Harris Sultan in Ask an Atheist on our YouTube and Facebook channels…

February 2, 2021 It's Still Viewable If You Missed It!
Browse Our Archives
get the latest from
Nonreligious
Sign up for our newsletter
POPULAR AT PATHEOS Nonreligious
1

How (and Why) Evangelicals Blow Their...
Roll to Disbelieve
Related posts from Secular World by AAI

Exodus Sidebar: Why Would You Believe That Chariot...
Confirmation bias comes in all sorts of shapes and sizes and is...
view all Nonreligious blogs
Copyright 2008-2021, Patheos. All rights reserved.
error: Content is protected !!