Over at The Wild Hunt blog, Jason Pitzl-Waters asks, what should we learn from James Arthur Ray’s return? (Ray is the New Age person whose faulty sweat-lodge set-up killed three people. He served two years in prison for this, and on release, has relaunched himself as a spiritual teacher.)

What can we learn as students of the occult & Pagan paths?

Learn what the warning signs are of a manipulative group, and withdraw from any situation where those warning signs appear. See the section “some danger signals to watch for” in this excellent article by Phil Hine, Approaching Groups.  Find out about group dynamics and how they work. Be aware of what triggers you into a state of passivity or compliance, and seek to avoid situations where that may occur. I once attended a ritual where the temple (a basement room) had a polystyrene ceiling, and there was a cauldron of burning methylated spirit, which we danced round. I was very scared when I thought about it afterwards – but I didn’t leave the ritual. Not because I felt coerced into being there, or anything like that, but because I was “away with the fairies”, and because it would have felt rude to leave.  Another time, I left a ritual without making sure that I was properly grounded, and parked my car in a stupid place where it got broken into. If you are in an altered state, it is very difficult to make rational judgements. It is not a matter of being gullible or stupid – it is how group dynamics work, as any social psychologist will tell you. As soon as people become part of a group identity, they start aligning their views and values to those of the group, and/or the most powerful person in it (not necessarily the named leader; this can be someone with a dominant personality). This happens even in small ad hoc groups such as pub conversations; it happens in healthy groups as well as unhealthy ones (but it is OK if the values of the group are healthy values; not okay if they are unhealthy). If you are planning to join a group, speak to all the members as well as the leader before joining. If there are warning signs, don’t ignore them. Does the leader seek to impose their values or lifestyle on members with different values or lifestyles?

What can we learn as teachers of the occult and Pagan paths?

We need to examine our own ethics and safety procedures, both physical safety and psychological safety.

Psychological safety: Do our practices and rituals empower people? Are we helping to develop people into competent ritual practitioners and functional human beings? Can people leave our rituals if they feel uncomfortable? Do we have an option for them to vent their feelings constructively if they are unhappy about something? Do people feel psychologically safe and nurtured in our rituals? If we are pushing at boundaries, do we have their informed consent to do so?  Make sure your group has sensible guidelines about personal interaction between members. Write the guidelines as a group exercise, so that everyone feels that they own them, and that they are not imposed from above.  Hold regular meetings where people can air any problems that arise (an annual meeting is probably enough, but any member of the group should be able to call a meeting whenever a sufficiently serious issue arises). Make sure ritual participants are properly grounded after the ritual, especially if they are driving home. Have a feast (eating is grounding) and some “mundane time” after the circle.

Physical health and safety: If you have a lot of incense, make sure the room is well-ventilated. If you have asthmatics in your group, make sure they have access to their inhaler whilst in circle. If people are allergic to cats or dogs, have they taken anti-histamine tablets?  If someone feels ill in your circle, stop everything and make sure they are OK before carrying on with the ritual. Their well-being is more important. If you are planning to include dancing in your ritual, are there trip hazards such as loose carpet? Are there fire hazards in the room (naked flame, incense burners)? Candles can actually be really dangerous – have a look at this check-list of candle safety tips, and the sobering statistics on fires caused by candles. 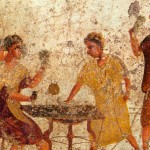 January 19, 2014 Building Pagan Intellectual Culture Face to Face
Recent Comments
153 Comments | Leave a Comment
Browse Our Archives
get the latest from
Pagan
Sign up for our newsletter
POPULAR AT PATHEOS Pagan
1

No, That's Not An Odal Rune
The Zen Pagan
Related posts from Dowsing for Divinity