“But I’m not racist”

Every time I see a friend posting about how they won’t put up with bigotry on their Facebook feed, I see comments from people going “but what about anti-white comments?” or “but what about anti-Christian comments?” or “why don’t I get to have an opinion as a straight white cisgender man?” or “Black people can be racist too”, or “not all men…” or “not all white people…”

This post is aimed at those people. I have no idea if any of them will read it, but I have to try.

Yes, humans are a prejudiced lot. Black people, LGBT people, Pagans, women, can all be prejudiced against people who are not in our specific identity groups.

But as a woman, I have to think about whether I can walk down a dark alley at night without getting assaulted. I also have to pick my male sexual partners carefully to make sure I have not picked one who will be violent towards me. I have to be careful what I post online so as to avoid receiving rape and death threats from hateful trolls. If you are male, you don’t need to worry about those things anywhere near as much as I do. Yes, I know men get raped and assaulted as well, but it is nowhere near as common as the rape and assault of women by men. Yes, I know that not all men are rapists, but nevertheless I have to consider the possibility that the next one I meet might be, in order to stay safe.

LGBTQ people have to make similar calculations about where we go, who we socialise with, and what we post online. I am a bisexual genderqueer woman married to a man, so I ‘pass’ as straight, but for those who are visibly LGBTQ, this is a real worry. Straight people can kiss and hold hands in public; LGBTQ people have to look around to check if there’s anyone nearby who might violently attack them for kissing or holding hands. Yes, we know that not all straight people are going to attack LGBTQ people, but we have to factor in the possibility in order to stay safe.

Black, indigenous, and other people of colour also have to make these calculations around white people. Will that white person attack them? Will the other white people around them fail to defend them in the event of an attack? They also know that not all white people are violent racist thugs, or people who will stand by while racist thugs attack them — but they literally don’t know which white people are going to help, who will attack them, and who will turn a blind eye. As to people equating the Black Panthers with the KKK — the Black Panthers were a resistance group fighting back against police violence; the KKK is a white supremacist hate group responsible for lynchings and systematic brutality against Black people. One of these things is not like the other.

Disabled people get beaten up for being disabled, denied benefits by the government because they were deemed ‘fit for work’ by a completely Kafkaesque and inappropriate test. They get ignored and marginalised by able-bodied people. How do they know whether or not the next person they meet is going to do the same?

Pagans, Muslims, Jews, and atheists have frequently experienced Christians assuming that we are all devil-worshippers, terrorists, part of an international banking conspiracy, or utterly immoral; so if we seem ‘prejudiced’ against Christians, it is because we have frequently been excluded from employment, discriminated against, and worse because of our religion. We know that not all Christians endorse these views, but for decades, the loudest voices among Christians have been those promoting bigotry and hate — sadly supported by the media only giving platforms to Christians with bigoted and hateful views. So, if you don’t support bigotry against Muslims, Jews, Pagans, atheists, LGBT people, and so on: then those attacks are not aimed at you. If you think that holding bigoted views is ‘religious freedom’, then you are part of the problem.

So if Black people, LGBTQ people, people of other belief systems, or women seem ‘prejudiced’ against you — ask yourself why that might be. If their entire prior experience is of people either attacking them, or minimising and ignoring an attack on them, why should you be the exception?

It’s not that your opinion is automatically invalid if you are white and/or straight and/or cisgender and/or male: but if you are saying “calm down” to minority groups who are scared rigid by the election of an openly white supremacist anti-LGBT misogynist who has the endorsement of the KKK, then you are dismissing their experiences of being attacked by white supremacists, anti-LGBT bigots, and misogynists — and that’s why your opinion is being discounted, and why your straight white cis male status is mentioned, because that explains why you haven’t had the same experience.

Also, since when has being on the receiving end of negative comments about being straight and/or white and/or male and/or cisgender been anything like the experience of being afraid to walk down the street or use public transport whilst visibly Muslim, Black, Latina/o/x, disabled, female, LGBT, etc because of the likelihood that you might be violently attacked, either by police or fellow-citizens? Since when has having your opinion dismissed because you lack experience of oppression been anything like being denied decent housing, jobs, or access to justice or clean water? There is no comparison between being told that you don’t know because you haven’t experienced something, and being told that the discrimination or violence that you actually experienced wasn’t really racism or homophobia or misogyny. There is no comparison between systemic and violent oppression and your feelings being hurt because someone called you out on your privilege.

Sure, not everyone who voted for Trump or for Brexit was a white supremacist, or a homophobe, or a misogynist, or anti-disabled. But they were people who ignored the blatant misogynist, homophobic, anti-disabled, and racist rhetoric of the campaigns, and voted for Trump or Brexit anyway. If you did that, it implies that you don’t care enough about the concerns of minority groups who will be victimised by the far-right policies of Trump or the Tories and by the violent attacks by thugs who feel vindicated in their racism, homophobia, misogyny, or anti-disabled attitudes. If you don’t care about the effects of far-right policies and attitudes and violence on minority groups, then that in itself is a species of bigotry. Sure, you wouldn’t go out and beat up members of minority groups — but you didn’t care enough not to vote in a way that legitimised hateful policies and hate-filled rhetoric. 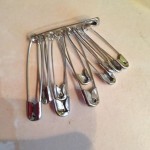 November 15, 2016
The safety pin: a reminder to resist bigotry
Next Post

November 22, 2016 A Meditation: The Trees and the Forest
Recent Comments
0 | Leave a Comment
Browse Our Archives
Follow Us!