Deep Religion with a Touch of Atheism

Some look out into the night sky and see nothing but darkness populated with a number of small lights.  They may conclude that because they see nothing but what astronomers tell us is there, that there is no God. And yet they may be feeling a sweeping sense of wonder and may be sent into a vast reverie of questions that impinge on the meaning they have discovered for their lives. Are they believers or atheists?

I have trouble choosing one over the other and don’t adopt either word for myself. I tend to think that they are two sides of a coin or ways of saying the same thing. I have a long and deep-seated affection for both belief and atheism, although I wouldn’t use either word to describe where I have arrived after a lifetime of searching.

Is there a God? Yes, I say with all of my being. Is this a God to whom you can pray and who is a worthy object of worship?  Yes. Can a formal religion help you connect with God? Yes. Is it the best way? No. That night sky and the both terrible and joyous things that happen in your life are probably more effective. Formal religion can even get in the way, and I would say that most of the time it does block your vision of the divinity right before your eyes.

Maybe the thing that blocks a perception of God more than anything else is the word “God.” We can perfectly well talk about the divinity in the world and how not to be secularists, without any reference to “God.” You look into the night sky and don’t see an old man with a beard sitting on a big chair. That was my childhood picture of God. But you are moved to wonder and your questions deepen and your foundations are shaken. That is the experience of God’s presence. You should do nothing but shake or perhaps mark the spot of your epiphany and return there with the hope that you might once again be moved to such wonder.

In my vocabulary belief means not having answers to the biggest questions but wondering with enough seriousness. Your equilibrium topples and your gut sense of what it’s all about opens up and is relieved of its limitations. If you must use the word “God,” do so without any constrictions whatsoever, with no sure confidence that you know what you’re talking about.  “The Tao that can be spoken is not the eternal Tao,” says the Tao Te Ching.

I’m the kind of a-theist who wants to say that whatever we say about God is at least slightly wrong, and maybe we should not use the word God ever. Once you remove it and continue in your wonder, religion becomes a possibility. Not religion as a creed or institution, but a way of thinking and seeing and being in the world, a standing at the edge of your existence, feeling the holy breeze of nothingness. But you don’t say that there is nothing there. That’s too easy and too cheap. You continue to talk about a lot of things without interfering with that breeze.

Emily Dickinson catches the religiousness in this kind of a-theism,

In the name of the Bee –

And of the Butterfly –

And of the Breeze – Amen.

The atheist often prefers to attack naive, highly institutionalized religion. But a more interesting and challenging conversation would develop out of a God perceived in wonder. I am interested in and support all kinds of formats for increasing wonder—the many rituals, creeds, prayers and theologies of the world’s spiritual traditions. A-theism, as I define it, is only a portion of my own religion. I don’t make an ideology out of it, as some do.

I don’t think that my religion/a-theism is an ideology, as it is for most religious people and atheists. I could be wrong, because it is extremely difficult for any person to see the narrative they’re caught in. I can say that I don’t want an ideology, a systematic interpretation that I hold as the only possibility.

I can pray on occasion, not using the word God, as I feel on the edge of my existence, looking into the emptiness of the sky, dismissing as much as possible any definitions and descriptions of the positive, hopeful and transcendent nothingness I perceive. I sense a crack in the universe, an opening to the unimaginable, and that is enough. Anything more makes me a theist and takes away the thread of precious a-theism in my vision.

The name God personifies our experience of the open hole in our existence, an opening that gives us hope. God isn’t just unknowable, God is what we call our unknowing. This unknowing is not unconsciousness; in fact, it arrives only after we have spent a long time trying to penetrate the thick, lazy unconsciousness of wallowing in the limited vision of worldly culture. This kind of unknowing is an achievement that comes after a dedicated quest to go beyond the frontiers of common knowledge and glimpse a crack in the cosmos. What you see on the other side of that crack is a glancing view of what we call God. 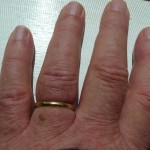 June 2, 2016
Of Human Bondage: the Dark Side of Desire
Next Post 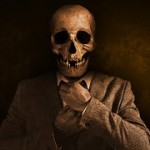 May Oracle
A Happy Medium
Related posts from Soul and Spirit