I’ve become fascinated by the rise in witchcraft in the United States. The name conjures up some silly Halloween stereotypes: a witch is an ugly old woman wearing a pointy hat, holding a broom, attended by a black cat. Of course, witches aren’t like that. Witchcraft also suggests that witches are women who’ve made a pact with the devil, and use demonic power to work miracles – to violate the laws of nature. Of course, witches aren’t like that either. Most witches don’t believe in the Christian devil.

And witches have some unfortunate history in the United States. Witches are often associated with Puritan New England and the Salem witch trials. During the Salem witch trials, about two hundred people, mostly women, were accused of being witches. They were tried and punished, and twenty were killed. Of these, fourteen were women and six were men. These were religiously motivated killings, that is, they were ritual killings. An anthropologist might regard them as human sacrifices.

So I’ve been interested in naturalistic conceptions of witches. I don’t believe in Satan, or that humans have supernatural powers, so I take the concept of a witch to be a natural concept. What do witches have in common? There are some very interesting scientific hypotheses about witches. Anthropologists and sociologists have noticed that accusations of witchcraft, and the murders of witches, occur during times of resource scarcity. The great witch hunts in central Europe occurred during the Little Ice Age, when there were food shortages. They rose and fell in relation to the temperature: colder temperatures correlated with more witch trials, and, of course, with less food. The Salem witch trials occurred after an unusually harsh winter, which led to food and fuel shortages. Studies of witch killings in Africa show that they rise along with crop failures.

These hypotheses suggest that witches are people sacrificed in order to relieve resource stress – they are killed so that others can eat. But who should be sacrificed? The history of witch persecutions shows that generally elderly people are sacrificed. This seems based on the unfortunate assumption that the elderly are no longer productive. Other studies have shown that the people accused of witchcraft are often suffering from senile dementia. These hypotheses explain why most witches are women: most elderly people are women. The men are already dead. So there is a biological, or sociobiological, explanation for witchcraft accusations. But this is not modern American witchcraft.

The modern American witch is usually depicted as a woman, tending towards youth rather than old age. I’ve read at least a dozen books on modern American witchcraft now, and they generally portray the witch as a young woman who is learning how to exercise power, especially how to exercise power in a social context. One theme that emerges from these books is that American patriarchy (which is associated with Christianity) prevents women from learning how to exercise social power. Boys are trained to be socially dominant, but girls are trained to be socially submissive. So witchcraft is a way for young women to practice the exercise of social power. It is training in becoming self-asserting. By extension, it is a way to fight against patriarchy and social injustice.

One good way to practice a skill is to practice it in a safe space. If you’re learning to fly a plane, you learn in a flight simulator. If you crash in the flight simulator, nobody gets hurt. You can restart and try again until you get it right. Call this the flight-simulator theory of witchcraft: witchcraft is a series of techniques for creating simulations of possible worlds (or possible futures). In those simulated worlds, you practice gaining, holding, and projecting social power. You learn what it is like to have an assertive self, to have a self that has a powerful will. You practice self-construction and self-assertion.

The flight-simulator theory gains support from witchcraft writers who describe the creation of ritual containers in which witchcraft is practiced. The ritual containers are often constructed by casting a circle around the witch. Within the circle, the witch raises power, concentrates the power, and focuses that power on some intended state of affairs or goal. Or the witch constructs a model of an intended self. The witch simulates the series of transformations they need to go through in order to become that intended self. Within the ritual container, there are no harmful consequences: you can’t suffer actual social defeat or loss of social status. The world-simulator is pretty much risk free. Once the practice session is done, you release any remaining power, and uncast the circle. By practicing exercising social power, you really can learn how to exercise it.

According to the flight-simulator theory, witchcraft is successful if it helps you learn how to construct a self that has a well-defined will and that exercises that will. Magic spells for getting a job aren’t about getting a job: they’re about changing you into a person with the virtues needed to find a job – virtues like patience and courage. Conversely, magic spells for finding a job aim to rid you of the vices that prevent you from looking for a job. They rid you of the feelings of social defeat (like depression, or feelings of personal worthlessness) that prevent you from socially displaying your person in the job market. On this view, magic is training in gaining virtues and losing vices. So I think most naturalists, who focus on the direct instrumentality of magic, fail to understand it.  I think the flight-simulator theory is probably a pretty good theory. But it needs further work.

On this view, organisms act magically when they produce symbols that depict intended (or desired) possible states of affairs. Magic is symbolic pretense: The trainee pretends to fly a plane by producing fake actions that resemble the actions of a real pilot. The witch pretends to be a powerful social agent. Now magic appears everywhere in earthly ecosystems. Orchids pretend to be female bees in order to get pollinated. They have evolved to cast spells on male bees. Their shapes and colors depict the possible futures in which they are treated like female bees by male bees. In those possible futures, the orchids get pollinated.  Walking sticks are insects that pretend to be sticks. They have evolved to cast spells on their potential predators. This kind of magic is trickery. But not all symbolic action is trickery. The magical use of symbols is common in the natural world.

Magic is symbolic action that manifests some desired possible state of affairs, usually some desired possible future state of affairs. So spells often have their effects long after the magician is gone. The alchemists cast spells to turn base metals into gold. Such transmutation was actually done in particle accelerators.  And it was carried out as an explicit demonstration that science could realize the alchemical dream. Ancient magicians tried to animate statues. Roboticists have explicitly realized their dream. This is not accidental: there is a tradition, whose historical links can be traced through books and artifacts, from the ancient Neoplatonic animators of statues to modern roboticists. So magic plays a role in the creation of technologies. But I think these thoughts about magic only scratch the surface. There’s lots more work to be done to understand it.

December 3, 2021 Humboldt’s Vision of Nature
Browse Our Archives
get the latest updates from
The Spiritual Naturalist
and the Patheos
New Visions
Channel
POPULAR AT PATHEOS New Visions
1 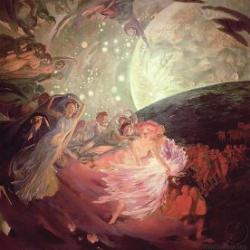 Under the Temple
The temple hanging over the water is anchored on pillars that nameless...
view all New Visions blogs
Copyright 2008-2021, Patheos. All rights reserved.