Watching the sun rise over a large body of water – the slowly increasing illumination of the sky, the colors captured in thin clouds, the moment the top of the sun first appears and the minutes that pass as the sun makes what appears to be its journey from the waters into the sky – is something I will always take the time to watch. Ideally, that large body of water is the ocean, but living about as far from an ocean as you can get in North America, for me it is more likely Lake Superior, a fine fresh water substitute. While the visual phenomenon of a sunrise is a joy in itself, the sun rising over water is also a central symbol of my spirituality.

Both the sun and water are important symbols in many forms of spirituality. Many early religions equated the sun with a god, which makes sense. The sun is the celestial object that has by far the greatest impact on us. It brings light to the darkness, warmth to the earth, and life from the soil. It marks out day and night and in its solstices and equinoxes the seasons.

Of aquatic symbolism, Mircea Eliade writes: “The waters symbolize the universal sum of virtualities; they are fons and origo, ‘spring and origin,’ the reservoir of all the possibilities of existence; they precede every form and support every creation….This is why the symbolism of the waters implies both death and rebirth.” Baptism, which ritualizes the death of the old natural self and rebirth of a new spiritual self, is a use of this symbolism of which we are probably all familiar.

The symbolism of the sun rising over the water contains for me something of these universal symbols of sun and water. But more particularly, I find in it an apt symbol of mindfulness and the practice of meditation.

The foundation of mindfulness is awareness and the ability to focus awareness. Awareness is a kind of “reservoir of the all the possibilities of existence.” Insubstantial and intangible, it is a great emptiness into which, in the course of a life, a continuous parade of phenomena enter, do their brief song and dance, and depart again.

The ability to focus awareness is similarly insubstantial, yet it is also something we can cultivate. Mindfulness is largely that cultivation. Through practice we can become more intentional about what we focus on. We can prolong or shorten the song and dance of the phenomena that enters our mind, by increasing our focus or turning our attention elsewhere.

All forms of spirituality have their central symbols. Such symbols as the yin/yang symbol of Taoism, the symbol for Om in some forms of Hinduism, the tree of the Spiritual Naturalist Society, can provide a gateway to a deep and complex set of ideas and associations. They are gilded gateways to spiritual contemplation.

Is there such a symbol that you find particularly fertile?

Beyond symbolic possibilities, a sunrise (or sunset) of any kind, if we take the time to be really mindful of it, is an ample beauty in and of itself. One of the many gifts of being mindful is the discovery that the world is rife with such beauty.

The Spiritual Naturalist Society works to spread awareness of spiritual naturalism as a way of life, develop its thought and practice, and help bring together like-minded practitioners in fellowship.

SNS strives to include diverse voices within the spectrum of naturalistic spirituality. Authors will vary in their opinions, terms, and outlook. The views of no single author, therefore, necessarily reflect those of all Spiritual Naturalists or of SNS. 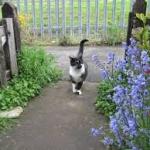 February 3, 2022 Hindus Seek Detachment. Have Plants and Animals Already Found It?
Browse Our Archives
Related posts from The Spiritual Naturalist

7 Lessons for Sitting with the Dying
In The Believer, Encounters with the Beginning, The End, and Our Place...
view all New Visions blogs
Copyright 2008-2021, Patheos. All rights reserved.
Close Ad