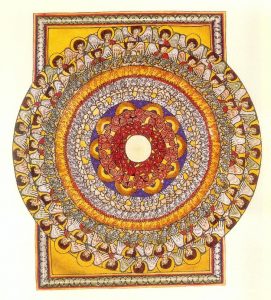 I have migraines with auras, which basically means that before my migraines, I get various kinds of psychological disturbances.  Like many people who have migraine auras, I have visual auras.   Most of my visual auras are pretty common: I see the shimmering zigzag shapes, the so-called scintillating scotomas.  Sometimes a black hole will open in my visual field, surrounded by a corona of blue or yellow or white radiation.  Or I’ll see a blue or yellow spot grow and flash then eventually disappear.  Other people have visual disturbances that are far more complex.  There’s a lovely book, by Klaus Podoll and Derek Robinson, called Migraine Art: The Migraine Experience from Within.  It’s got hundreds of illustrations drawn or painted by migraineurs of their auras.

Like most migraineurs, I rather quickly realize that my visual disturbances are just illusions.  But sometimes the onset of my migraines comes with confusion. I see a huge black spot opening in my visual field and I think: I must have been staring at the sun!  Of course, I wasn’t staring at the sun. One of the stranger things about these black holes is that they are unbearably bright.  Despite being entirely black, they seem brighter than any sun in the sky.  So it can take me awhile sometimes to realize that what I’m seeing has no direct correlation with reality.  Auras are hallucinations.  My experience of the zigzag shape is real, but the experience doesn’t represent anything in the world.  It has plenty of reality inside of my head, but no reality outside of my head. My experience isn’t about anything in the external world.  It doesn’t refer to anything.

And, like many migraineurs, I get affective auras. This means that, before my migraines start, my mood changes rapidly and extremely.  It often soars off into an intense almost joy, a kind of ecstasy that me feel like my head is going to explode with positivity.  What happens next is that the world begins to seem, in an indescribable way, as if everything is on fire, being consumed with flames. I can clearly see that things are burning, even though the fire is invisible.  When Pascal wrote down his great mystical experience, he wrote “FIRE” in capital letters at the top of the page.  And he experienced intense joy.  It seems likely he was experiencing migraine aura. It’s been argued that the mystical visions of Hildegard von Bingen were migraine auras.  To make the point general, it can be argued that all mystical experiences correspond to migraines.

Another aspect of migraine aura, which I also sometimes get, is vestibular disturbance.  This gives me vertigo. The brain can’t coordinate visual and positional stimuli.  What happens next (besides being dizzy) is that the world starts to lose its reality.  This known as derealization.  And you yourself start to lose your reality.  This is depersonalization.  It’s ego dissolution, as intense as any ego dissolution from taking a serotonergic psychedelic.  Perhaps this is what the Buddhist meditators are getting at when they describe the selfless clarity of pure consciousness.  I find it terrifying.

Many pagans today use unusual experiences to try to argue for the existence of their deities.  These experiences are often referred to as unverified pagan gnosis (UPG).  I’m currently reading a wonderful pagan book, probably the best pagan book I’ve every read.  It’s John Beckett’s The Path of Paganism: An Experience-Based Guide to Modern Pagan Practice. It’s a fantastic book.  But most of his justification for the existence of the pagan deities goes like this: (1) I’ve had some intense experiences which I interpreted as being about my gods; (2) since those god-experiences were so intense, they must have been caused by something outside of my head; (3) but the only thing that could cause me to have a god-experience is a god; (4) therefore, my gods exist.  Obviously, the god-experiences are real.  And equally obviously, it does not follow that the gods are real. The argument fails entirely at steps (2) and (3).  But we need to be careful here.

Beckett wisely realizes that his unverified pagan gnosis isn’t a reliable guide to the existence of anything.  He realizes that seeing visions and hearing voices could just be caused by mental disorders – like migraine, or schizophrenia, or mania.  So he turns from unverified pagan gnosis to shared pagan gnosis.  He points out that many pagans often have god-experiences which share many common features.  He infers from this that the god-experiences must therefore be caused by gods.  This is not unreasonable.  If we all seem to see a chair in the middle of the room, our shared experiences are good evidence for the existence of a chair.  Good but not indisputable.  Migraine auras have shared features.  We often see shimmering zigzags.  This is shared migraine gnosis. It does not imply that there are real things in the world causing those zigzags.

One line of thinking says all experiences have some representational content: they reveal something.  They may literally reveal possible objects.  It is possible that there are shiny zigzaggy things floating in the air.  It is possible that some superhuman animal talks to you or shows you images of itself.  But these possible objects do not exist in our universe and they do not interact with our brains. We do not perceive them.  So even though our experiences may be about them, they are not causes of those experiences.  Our experiences provide no evidence for the existence of possible objects.  If you want to say your experiences reveal possible objects, then you need to first argue for the reality of those objects on independent grounds.  The philosopher David Lewis argued that all possible universes exist.  He even calls himself a radical polytheist: every god you could ever imagine or hallucinate exists in some possible universe. Just not ours.  So Lewis and I would say to Beckett: Your Cernunnos-experiences really are about Cernunnos.  But Cernunnos does not exist in our universe.  He exists in some other universe.

A god that exists in another possible universe can still be religiously meaningful.  Purely possible objects can be objects of admiration and desire.  You can admire the noble character of Aragorn in the Lord of the Rings trilogy.  You can want to be like him.  And so, even if Cernunnos exists in some other possible world, his virtues can be objects of desire.  They can be goals at which you aim.  Any ideal, by definition, is not real; but this only means it is not actual.  Any ideal, also by definition, must be possible.  An ideal is a possible future goal or target to which you make personal progress.  Sometimes unverified pagan gnosis reveals ideals that can shape real behavior.

But it does not follow that all religious experiences reveal objects in other possible universes.  Sometimes, they may reveal strange features of our universe in strange ways.  They may figuratively reveal actual aspects of our universe.  Consider the black hole suns that sometimes reveal themselves to me.  They don’t literally reveal the existence of any void of blazing darkness in our universe.  But they may figuratively reveal the fact that our universe might not exist. Or they may figuratively reveal the deeper fact that there might not be any things at all.  They could symbolically point to the uncanny fact that reality is haunted by nothingness.  Do holes exist?  Heidegger said the nothing nots.  If that is true, then maybe my black hole suns symbolically refer to that truth.  They refer to it, but they do not provide any evidence for it.  If I think the black hole suns refer to the fact that the nothing nots, I need to independently argue that the nothing nots.  And then I need to argue that my black hole suns are the sort of thing that might symbolize it.

Pagan deities are often thought of as aspects of nature.  They are parts of the natural world rather than supernatural entities.  Sometimes aspects of the natural world overwhelm our brains. The power of nature reveals itself in the cycle of animal life and death.  This power is intensely personal for each of us, since we are animals that were born and that will die.  The wheel turns.  And it has been turning for billions of years.  This enormous magnitude makes the experience of the circle of life and death sublime.  It sublimity is a real aspect of our earth, an aspect that can reveal itself to your brain.  If it does, your brain might struggle to make sense of it.  And, to make sense of it, your brain might project a god into it – it might project a powerful rational agent into that aspect of reality.  The horned god Cernunnos can symbolize that cycle.  But that god is just a figurative symbol for a real aspect of nature.  As long as you don’t take that god literally, you’ve made no mistake.  The danger is in taking symbols as literal.

New Visions
The Meaning of Life
The Spiritual Naturalist

Spirituality and Microscopes
by Eric Steinhart Every spiritual naturalist (and every pagan) should own a microscope....
view all New Visions blogs