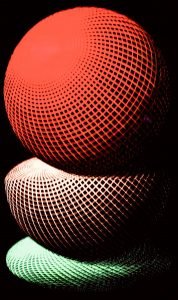 I have long been intrigued by the saying: “God is an intelligible sphere, whose center is everywhere and whose circumference is nowhere.” The precise origin of this statement is unknown. It has been attributed to Hermes Trismegistus, the supposed author of the Corpus Hermeticum, though its earliest appearance in the form given above seems to be in a medieval book of unknown authorship titled The Book of Twenty-Four Philosophers.

There are many things I like about this statement. One is that it removes every trace of the idea that humans and God share the same image. According to Jorge Luis Borges, in an article titled “The Fearful Sphere of Pascal,” an early version of this idea was put forth by the Greek philosopher Xenophanes of Colophon, as a rebuttal to those who attributed anthropomorphic traits to the gods. His version was simply that there was but one God and that God was like an infinite sphere. In other words, God is essentially formless and illimitable.

One cannot imagine or even conceptualize an infinite sphere or a being whose center is everywhere and whose circumference is nowhere. If God is unimaginable then God is indescribable and of God, nothing can be spoken. Like the Tao of the Tao Te Ching, he who knows does not speak and he who speaks does not know. The surfeit of statements about God and what he thinks and likes and wants that we see around us in America today gives me intellectual indigestion.

Another thing I like about the “intelligible sphere” aphorism is that it presents a thoroughly pantheistic notion of deity. Since the divine center is everywhere, it is immanent throughout the creation, and each of us is a center of that divinity. The saying implies another aphorism that I find profound: “the kingdom of heaven is within you.” My experience has been that all we need do is escape the powerful hold of our natural egotism and this divine otherness will shine forth within us. Unfortunately, escaping our natural egotism is anything but easy.

Yet another thing that attracts me to this statement is its similarity to ideas about the shape of the universe in modern scientific cosmology. This cosmology tells us that it is impossible to reach the edge of the universe, no matter how far or for how long we travel in any one direction. And also, that no matter what our position in the universe, we will see the universe expanding away from us equally in all directions. In other words, the universe is like a sphere whose center is everywhere and whose circumference is nowhere.

As a pantheist, it doesn’t matter much to me whether one uses the word God or Universe or Nature or Tao or Great Spirit or any of the other terms people use in reference to the most ultimate of things. Removed from their parochial setting, they all speak of the same thing – the creational process that is the source of all that has been and is and will be. Since I rather love my life and love the world I find myself in, I love the source of this life and this world, whatever word one uses for it.

Since one could substitute any of the words listed for the creational process into the saying about the intelligible sphere, I think it safe to say that it is a statement of a universal spirituality, rather than a provincial one. And that is another thing I like about it, and why I write about it here; I think the idea contained in this metaphoric statement is one with which spiritual naturalist should be comfortable.

SNS strives to include diverse voices within the spectrum of naturalistic spirituality. Authors will vary in their opinions, terms, and outlook. The views of no single author therefore necessarily reflect those of all Spiritual Naturalists or of SNS.

October 7, 2022 Trust The Seekers
Browse Our Archives
Related posts from The Spiritual Naturalist

The Mental and Spiritual Benefits of Naps
In the latest edition of The Saturday Evening Post, there’s a story...
view all New Visions blogs