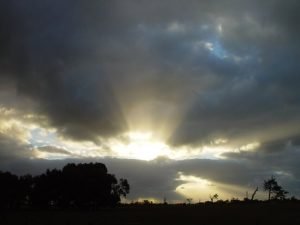 This is my simple religion. There is no need for temples; no need for complicated philosophy. Our own brain, our own heart is our temple; the philosophy is kindness. – The 14th Dalai Lama.

Back in 2018, Dennis Oliver’s book review of The Christian Middle Way by Robert M. Ellis here on SNS prompted me to download a copy to my eReader and give it a thorough read. Ellis’ book provided some helpful paradigmatic waypoints on my own long journey out of the absolutism of my literalist religious background and into what feels like a more adaptive provisional space of living. I have returned to my notes and highlights several times in the years since.

One helpful paradigm Ellis articulated for me is a distinction between beliefs and faith. So many Western philosophical positions are premised on beliefs. Many adherents hold their beliefs as absolutes, thereby closing themselves off to alternatives. I should know. I used to be one of them.

Another friend of mine used to say during our weekly lunches, “Human beings have an endless capacity for belief.” Think about that abstractly for a moment. “I can believe anything!” Now think about that in the context of the wildly divergent absolute beliefs espoused by people in relation to the COVID-19 virus and vaccines. “Some people will believe anything.”

I would love to be able to consistently rely on the following logic: “Just look at the evidence, draw a reasonable conclusion, then act on it.” While this is not unreasonable and may even work sometimes, it has been my experience that no matter how reasonable my conclusion, it easily falls apart—or at least gets seriously modified—in the implementation. There is a difference between a belief in a logical conclusion based on review of evidence and beliefs that are embodied and experiential. This brings up the power of desire. What do I want to be true vs. what have I experienced to be true?

If my friend is correct about humanity’s endless capacity to believe, I wonder if it may be because humanity is also bottomless well of desires? Curiously, my beliefs—whether fixed over a lifetime, changing with the wind, or more likely somewhere in between—often depend on what I want. And what I really want deep down is influenced by my embodied experiences.

There have been many ways of articulating humanity’s basic ego desires for security, approval, and control. I have learned I need those actual things less than I think I do. What I really crave is the subjective sense (i.e., the illusion) of having them. Analyzed against this backdrop, most belief systems are cleverly designed to meet and satisfy one or more of these basic human desires.

Absolute beliefs get enshrined in dogma resulting in the phenomenon of enforcing conclusions at all costs. Irish poet Padraig O’Tuama wrote, “We don’t know what the truth is, but we know what we need our answer to be. And the answer is this, so therefore you’re wrong.”(1) Some people need there to be a god so their sense of reality makes sense. Other people need there not to be a god for the same reason. That is just one example. Fill in your own answer based on your own need and test the theory.

Faith can work differently than belief. While the word “faith” is also a noun—defined by the dictionary as essentially the same as belief—faith can also function more actively like a verb. An act of faith doesn’t actually require any particular belief or beliefs. An act of faith does not even require an object of faith. Living by faith can be as simple as keeping on going without knowing what will happen. Believe it or not, I suspect most of us live by faith to one degree or another.

Clinging to a set of beliefs tends toward absolutism. Living by faith can be provisional and relational within changing conditions. Beliefs tend to be static. Faith can be dynamic. Beliefs impose themselves on reality. Faith can be responsive to reality. Even the reality of death and loss.

In grief, when everything seems dark and chaotic, and we are crying with agony in our hearts, anything that the mind is holding on to as a belief will be very shaky. Belief is rooted in the mind, and in the face of death, the mind crumbles. We doubt everything that we have known to be true. Faith is rooted in the heart. It exists beyond the thinking mind. That’s why faith is important, even when it is only a fragile thread.(2)

An invitation to faith does not have to be an invitation to adopt a set of beliefs about anything. Some naturalist converts talk about “losing my faith” when what they really mean is “losing my religion.” Unfortunately, for many who walk a path out of one dogmatic system, it is easy to exchange our old beliefs for a new set of equally dogmatic beliefs. While the philosophy may be different, dogma still remains.

For me, “losing my religion” was more about letting go of certain beliefs including the belief that I needed to be certain about anything. The process of letting go of beliefs has helped me become a person more at peace with uncertainty and therefore more consciously open to faith. I have let go of the world of “I know” in exchange for the wonder of “We’ll see.”

The Spiritual Naturalist Society works to spread awareness of spiritual naturalism as a way of life, develop its thought and practice, and help bring together like-minded practitioners in fellowship.

SNS strives to include diverse voices within the spectrum of naturalistic spirituality. Authors will vary in their opinions, terms, and outlook. The views of no single author therefore necessarily reflect those of all Spiritual Naturalists or of SNS.
__________