My recent trip to see “In the Heights” in theaters really renewed my appetite for another musical to take home the Best Picture Oscar. The last time this happened was at the 2003 ceremony with Rob Marshall’s premier film, Chicago.

Adapted from the 1970s stage show, this musical film offers a satirical look at the intersection between celebrityhood, crime, and the public’s appetite for drama. The film also presents a sort of prodigal son parable of both the allure and pitfall of sin.

The spotlight-starved Roxie Hart (Renee Zelwegger) would kill to be on the stage. When she does just that, Roxie finally finds herself under the spotlight as her murder trial hooks the attention of the masses, turning her into something of a celebrity. Her highly-publicized trial will determine not only her future on the stage, but also whether or not she will live or die.

Through her sustained clever performance, Roxie emerges from the courts cleared of her charges. Unfortunately for Roxie, a new murder overshadows her victory, and all her public appeal evaporates on the spot. The prodigal daughter spent her inheritance chasing the love of a fickle crowd at any cost. Now she’s just another has-been.

The world of stardom, like the criminal underworld in Chicago, is presented as alluring, the playground of the powerful. One of the movie’s most iconic numbers, The Cell Block Tango, has the other accused murderesses of the jail recounting the details of their crimes with sinful relish. “He had it coming,” they refrain with confidence, panache even, as Roxie watches on in admiration. Transgression often masks itself as liberation. That’s why it catches so many Roxie Harts.

I’m also going to comment on the nature of the musical numbers within this film. Your average movie musical (e.g. The Greatest Showman) has the songs happening literally within the movie’s universe. Meanwhile, Chicago implies that the majority of the musical numbers are fantasies that take place on the stage within Roxie’s own mind. Her own murder trial just becomes a captivating show in which she is the star. Again, we see the vanity piece entering the conversation.

Like a well-staged musical number, sin is framed as stylish and slick but ultimately transient and illusory. Roxie becomes seduced by the temptation of fame and adoration. This leads her to first kill her lover and then to play to the demands of the fickle and unfeeling masses. This charade buys her fifteen minutes of fame, but it ultimately gains her nothing.

The film stops just short of being a true cautionary tale. Roxie and her rival, Velma, regain favor with the public by headlining a show as part of a duo. The city harbors a dozen or so acquitted murderers headlining the stages. But two murderers performing together? That’s something the public hasn’t seen before. And so Roxie still gets what she wants despite her sinful indulgence.

Just so, I suppose there’s something to be said for Roxie setting aside her bitterness toward Velma. I wonder what lesson there is to be had there: if you must sin, at least do it in a way that builds others up?

June 19, 2021
Arrival as a Glimpse into Godhood
Next Post 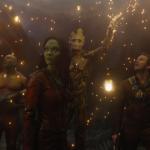 June 26, 2021 Guardians of the Galaxy and Discipleship
Browse Our Archives
get the latest updates from
Sublime Cinema
and the Patheos
Entertainment
Channel
POPULAR AT PATHEOS Entertainment
1