GOD IN OUR MIDST. 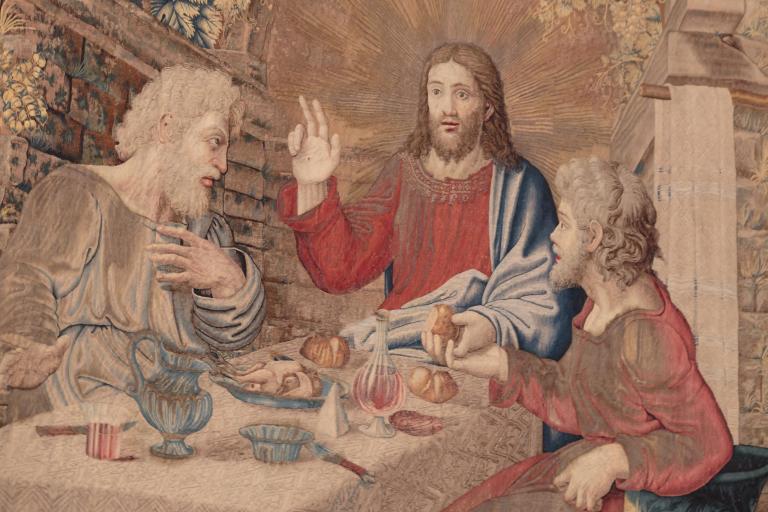 “Well, if it’s a symbol, to hell with it.” This was Flannery O’Connor’s flustered response to the claim that the Eucharist is only symbolic.

At the very heart of the Catholic faith is the belief, as set forth at the Council of Trent, that Jesus is “really, truly, and substantially present” in the Eucharist.

The Catholic Church is the steward of seven sacraments, but the sacrament par excellence is the Eucharist. It is “the fount and apex of the whole Christian life” (Lumen Gentium, no. 11). In many ways, what was begun in baptism, strengthened in confirmation, comes to completion in the Eucharist, where we are blessed to partake of the “bread of life” (John 6:35).

It is telling that the word Eucharist comes from the Greek word “eucharisteo” which means to give thanks. We do not so much go to Mass to receive as to give thanks to the One who has given us so much. This understanding of the Eucharist originates, at least partially, from the Didache, also known as the Teachings of the Twelve Apostles, written near the end of the first century.

The Eucharist is recognized within the context of the Jewish Passover and the Seder meal as thanksgiving. The Passover celebrates the Israelites’ escape from slavery in Egypt. More specifically, Passover refers to when God spared or “passed over” the homes of the Israelites as the firstborn sons of the Egyptians were put to death.

This annual celebration of giving thanks to God includes the Seder meal that Jesus refers to in Matthew 26:18, “My appointed time draws near; in your house I shall celebrate the Passover with my disciples.” This meal is the Last Supper, and it is re-presented in the Mass.

Sins violate the covenant between God and man, for they are actions against the will of God. Moreover, they fracture man’s relationship with God. To repair this relationship in a world made broken and fallen by original sin requires sacrifice.

The Old Testament is replete with sacrifices conducted for expiation or the atonement for sins. These sacrifices almost always involved the spilling of blood. Leviticus 17:11 gives us the reason for this: “since the life of the flesh is in the blood, and I have given it to you to make atonement on the altar for yourselves because it is the blood as life that makes atonement.”

Often, atonement involved sacrificing a substitute for the one guilty of sin—the more blameless or blemish-free, the greater the atonement value. Since sin brings death (Romans 6:23), the death of a scapegoat was payment for sin. It wrung life from death. Divine forgiveness became possible through this process.

It is helpful to view atonement as occurring in two ways. First, it can atone in a particular way, for a particular person or group, for example, the atonement one seeks in the sacrament of confession. In a second way, atonement is accomplished universally, as was done by Jesus on the Cross. (See Council of Trent, Session twenty-three).

The practices of sacrifices depicted in the Old Testament were always particular and thus had to be repeated.

The sacrifice of Jesus on the Cross is quantifiably different, however. Christ’s sacrifice sanctified all of mankind definitively, as we read in Hebrews 10:8-10: “First he says, “Sacrifices and offerings, holocausts and sin offerings, you neither desired nor delighted in. These are offered according to the law. Then he says, “Behold, I come to do your will.” He takes away the first to establish the second. By this “will,” we have been consecrated through the offering of the body of Jesus Christ once for all.”

What was temporal and inadequate in the sacrifices of fallen man are made eternal and perfect in Christ. Only in the God/man of Christ could a perfect atonement be made. If Jesus was only a man, he could not have made a perfect atonement. Similarly, if Jesus was God and not a man, He could not have provided the perfect sacrifice necessary for atonement. In Jesus as both man and God, such atonement is possible.

While the sacrifice of Jesus is at the heart of the Eucharist, we should not interpret the sacrament as a re-sacrifice of Jesus or a re-crucifixion of Christ. Rather, the Eucharist is a re-presentation. The Catechism articulates it this way, “This [Institution of the Eucharist] he did in order to perpetuate the sacrifice of the cross throughout the ages until he should come again” (Catechism of the Catholic Church, Part Two, Section Two, Chapter One, Article Three, Paragraph 1323). This is true because Jesus is as present in the Eucharist as He was to the Apostles at the Last Supper. To understand how this is possible, we must delve into an important and complicated subject – transubstantiation.

Transubstantiation is a subject so complex that it cannot be fully treated here. Nevertheless, borrowing a concept from Aristotelian metaphysics – form and matter – helps in explaining transubstantiation to some extent.

Form is what the particular thing is, so form must always be present when talking about any type being. On the other hand, matter is a trait or characteristic that is present with a thing, but not essential to it. For example, a person has a soul, which Aristotle would call the form of a human being. The matter of a person may be height. A person’s height is present with every person, but it is not essential to who that person is as a human being. (See “The Physics” by Aristotle).

While this is a complex subject, the Catholic Church simply takes Jesus at His word when He says, “This is my body that is for you. Do this in remembrance of me.” In the same way also the cup, after supper, saying, “This cup is the new covenant in my blood. Do this, as often as you drink it, in remembrance of me” (1 Corinthians 11:24-25).

Perhaps if experience had not dulled our sensitivities, we would be amazed and humbled by the fact that a God who needs nothing from us saw fit to send His Son into our midst to save us, and He remains physically in our midst through the great sacrament of the Eucharist.

Catholic Church "Above" the Bible? (vs. Lucas Banzoli)
Lucas Banzoli is a very active Protestant evangelical apologist in Brazil, who...
view all Catholic blogs
Copyright 2008-2021, Patheos. All rights reserved.