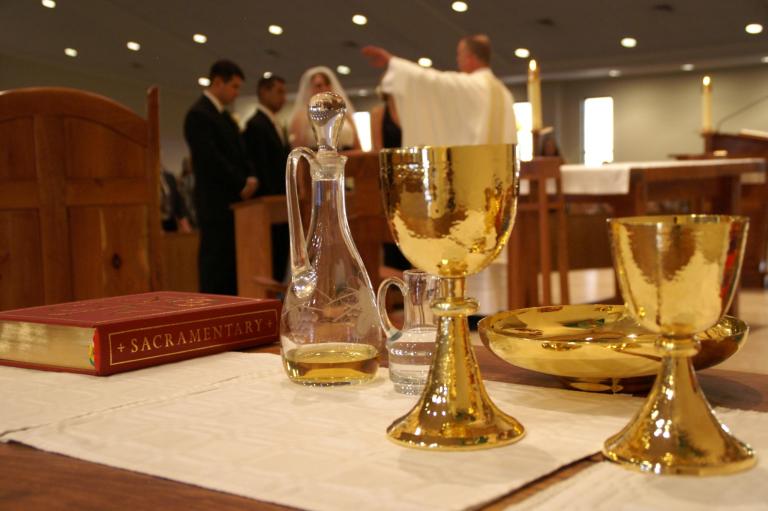 “Therefore, a man shall leave his father and his mother and hold fast to his wife, and they shall become one flesh.”

Perhaps the most unique sacrament of the Catholic Church is marriage. For it is an institution that is often associated more with the secular world than the religious or spiritual realm. To be sure, marriage as an institution is inclusive of law, anthropology, and history.

Nevertheless, in the following discourse, I will seek to survey the different forms marriage has taken in history, and how the Bible views marriage. Lastly, I will discuss marriage as a sacrament of the Catholic Church.

As is often the case, the secular and the religious are in conflict, which is true even when attempting to define a subject. Perhaps the model secular definition of marriage was provided by the Finnish sociologist Edvard Westermarck, who defined marriage as “a relation of one or more men to one or more women that is recognized by custom or law”. (See The Future of Marriage in Western Civilization). This definition is helpful within an anthropological setting.

Historically, marriage has taken many forms, from a legal contract to a social union, to a religious covenant. More often than not, marriage in the ancient world had little to do with God or romance and much more to do with economics and the propagation of bloodlines. Indeed, marriages were often arranged along purely economic grounds and to create bonds between families. This practice of arranged marriages remains part of the milieu in various parts of the world today.

While marriage is usually between a single man and a single woman, it has also taken place between two men, between two women, a man and multiple women (polygyny), and a woman and multiple men (polyandry). (See Dartmouth College, Department of Anthropology, Course 50:17).

Marriage in the Bible

God said, “it is not good for man to be alone. I will make a suitable partner for him.” (Genesis 2:18). This suitable helpmate was formed from the very rib of man, and thus woman was “flesh of his flesh” (Genesis 2:22-23).

If one contemplates the fact that the Bible begins with the creation of man and woman in the image and likeness of God and concludes with a vision of “the wedding-feast of the Lamb”, then the significance that the authors of the Bible placed on marriage comes into relief.

Nevertheless, marriages in Biblical times were quite different from the marriages of the modern world. Very often, marriages were arranged and it was not uncommon for a young woman to be “given” by a family member in marriage, often by her father.

However, the most striking characteristic of marriages in the Old Testament was that of polygamy. Indeed, several prominent men of the Old Testament had multiple wives. In 1 Kings 11:3, we read that King Solomon had seven hundred wives. Still, this practice of polygamy, very often like marriage in general, had economic considerations at its heart. The inferior economic status of women of the ancient world often necessitated that women find a husband that could support her as well as her children.

Suffice to say that marriage within the Biblical world was very much influenced by culture and economics and very often seemed to be one of a contractual obligation.

Marriage as a sacrament

Contrary to the concept of marriage as a contractual obligation, Catholicism asserts that marriage is a sacrament. Indeed, Saint Paul compares the marriage of a man and a woman to the relationship of Christ and His Church. (See Ephesians 5:23-32).

To understand why this is so, we must understand that Catholicism asserts that God created man out of love and, in turn, man’s most fundamental and innate vocation is to love. Moreover, as man is created in the image and likeness of God, and God is Himself love, marriage is intended to reflect the absolute and unfailing love with which God loves man.

Still, it would not be until the Council of Verona in 1184 that marriage would rise to the level of a sacrament (See Systematic Theology by Francis Schussler Fiorenza and John P. Gavin). As sacraments are defined as “an outward and visible sign of an inward and spiritual grace” (as defined by Saint Augustine), then it is the words of Jesus Himself that gave marriage its sacramental state. For we read in Matthew 19:4-6, “Have you not read that he who made them from the beginning made them male and female, and said, ‘For this reason a man shall leave his father and mother and be joined to his wife, and the two shall become one flesh? So they are no longer two but one flesh. What therefore God has joined together, let not man put asunder.”

Put another way, “The matrimonial covenant, by which a man and a woman establish between themselves a partnership of the whole of life, is by its nature ordered toward the good of the spouses and the procreation and education of offspring; this covenant between baptized persons has been raised by Christ the Lord to the dignity of a sacrament.” (Catechism of the Catholic Church, section 1601).

So although the modern person tends to view marriage within a strictly secular framework, a comprehensive understanding of marriage must admit that the author of marriage is God Himself.