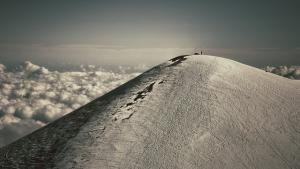 A simple conjuring up of God often entails the sense that God is above. Our prayers are directed to the Heavens which exist “up there.” While the concept of God and Heaven being above the earth is simplistic, the symbolism involved is of great value.

This symbolism is often seen in the significance of mountains in the Bible. At least part of the reason for this lies in the ancient world’s belief that the summit of a mountain was the meeting place of Heaven and earth.

This paper will review several significant events depicted in the Bible that involve mountains. I will also seek to explain the deep religious meaning of the sacred mountain.

Mountains And The Old Testament

Within the Old Testament, it is possible to identify six mountains that are of great significance theologically.

The first mountain of note is Mount Horeb (which is also called Mount Sinai). Here, God reveals Himself (after a fashion) to Moses. The story of the burning bush commences the events leading to the Israelites’ exodus from Egypt. In addition, God calls Himself “I am that I am.” This phrase distinguishes God from the various pagan deities that were often forces of nature that had names by which people could summon them. The God of the Bible is utterly transcendent and the efficient cause of creation itself.

In addition to the burning bush story, Mount Horeb (Sinai) is also notable for another significant event in the Old Testament.

Another mountain that is of no small import theologically is Mount Ararat. Traditionally, it is believed that Noah’s ark came to the end of its voyage on this mountain after the great flood. The significance of the flood is seen in several ways.

One of the most dramatic events of the Old Testament occurs on Mount Moriah. Commanded by God to sacrifice his son Isaac, Abraham climbs to the summit of Mount Moriah. At the last moment, God, seeing Abraham’s faithfulness and obedience to Him, orders Abraham not to kill his son. Owing to Abraham’s willingness to rely on God, Abraham becomes the father of Israel.

While Moses is rightly considered the leader of the Israelites, he never set foot in the Promised Land of Israel. Because Moses had “broken faith” with God (Numbers 20:12), he was only allowed to see Israel from atop Mount Nebo shortly before his death.

Also of great importance is Mount Zion. On this mountain, King Solomon built the Temple that today is the site of the Temple Mount. Because it was believed that God (Yahweh) dwelled in the Temple, it is seen as a foreshadowing of the Kingdom of Heaven. Also of note is that it is thought that Jesus’ Last Supper took place on Mount Zion.

The last mountain of significance depicted in the Old Testament is Mount Carmel. On this mountain, the prophet Elijah vanquished the prophets of Baal by showing the power of the God of Israel. Once more, the God of Israel shows Himself to be the one true God.

Mountains And The New Testament

Mountains play a significant role in the New Testament as well. Of particular importance are Mount Tabor, Mount Olivet, and the Mount of Beatitudes.

It is possible to mark the life of Christ using three events. The first, His baptism, and the last, His ascension. Perhaps, the culmination of His life is the Transfiguration which occurs on Mount Tabor.

The Gospels recount the story of Jesus taking Peter, James, and John up SaMount Tabor. There Jesus was “Transfigured before them, and his clothes became dazzling white, such as no fuller on earth could bleach them. Then Elijah appeared to them along with Moses, and they were conversing with Jesus. Then Peter said to Jesus in reply, ‘Rabbi, it is good that we are here! Let us make three tents: one for you, one for Moses, and one for Elijah.’ He hardly knew what to say; they were so terrified. Then a cloud came, casting a shadow over them; then from the cloud came a voice, “This is my beloved Son. Listen to him.” (Mark 9:2-13).

The Mount of Olives is mentioned prominently in the New Testament. This mountain has great significance in the life of Jesus. It was at the foot of Mt. Olivet, in the Garden of Gethsemane, that Jesus went to pray before his crucifixion. It was also here that Jesus ascended into Heaven.

The Meaning And Significance Of The Sacred Mountain

As we have seen, the mountain has great significance in the Bible, and indeed, mountains are mentioned over five hundred times in the Scriptures. While at least part of the reason for this lies in the geography of the various locals of the Bible, mountains also are symbolic. This symbolism begins with the ancient idea that mountain summits were the meeting place of Heaven and earth.

In ascending the mountain, one takes leave of the world and draws nearer to God. The symbolism of being nearer to God, along with the sense that a mountain is a place of isolation or loneliness, make it ideal for encountering the transcendent.

It is no coincidence that mountains are so significant to the stories of Scripture. From God “coming down” the mountain to interact with His creation to the great spiritual value of climbing nearer to God by leaving the world behind, the mountain is indeed sacred.

July 6, 2022
The Place Of Tradition In Catholicism
Next Post

Catholic
What Is A Soul?
Summa Catholic
TRENDING AT PATHEOS Catholic