Yes, This Is Who We Are: The United States and Our History of Injustice

Yes, This Is Who We Are: The United States and Our History of Injustice February 1, 2020 Rebecca Bratten Weiss 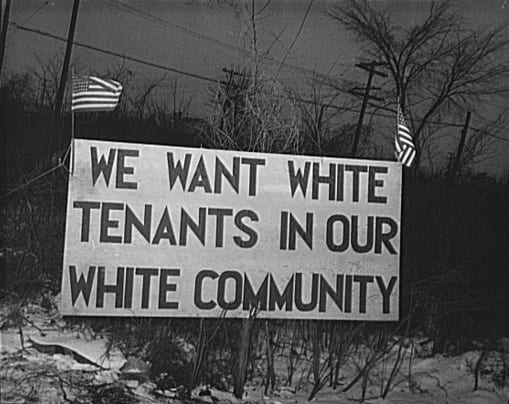 Novelist Stephen King can usually be relied on to understand the intricacies of a moral and political situation better than many philosophers and theologians I have known, but even he has his missteps, and recently made one, regarding the dust-up over the novel American Dirt.

If you have not been following this situation, I’ll try to sum up: Jeanine Cummins is a U.S. writer who, though of Puerto Rican ancestry, identified as white until very recently – around the time she was awarded a seven-figure book contract for her novel about the struggles of Mexican refugees. Cummins’ novel, insufficiently researched, reiterates harmful stereotypes about Latinx immigrants and Mexican culture, depicting what some have called “trauma porn” in a style seemingly concocted with the expectation of an exclusively white audience. The issue is not, as some are saying, that of writing about perspectives not one’s own. The issue is the failure to do the work to get these perspectives right. Moreover, if a publisher needed to give a writer a million dollars for a book about immigrants, perhaps giving it to a writer who had actually been an immigrant might have been a good option?

But the publishing industry seems not to have marginalized or less advantaged writers on its radar.

The backlash against Cummins has been extreme. Many Latinx writers have justly excoriated her work in essays, articles, and social media posts, bringing up issues about privilege and perspective that the writing world would do well to note. The publishers ended up canceling the book tour. Unfortunately, instead of focusing on the systemic and institutional problems that this fiasco brought to light, the author herself has become the target of a campaign of harassment and even death threats.

It was about this that King tweeted:

“We don’t threaten writers with violence. Not in America.”

If only this were true. It is not, however, as many other Twitterers showed up to point out: 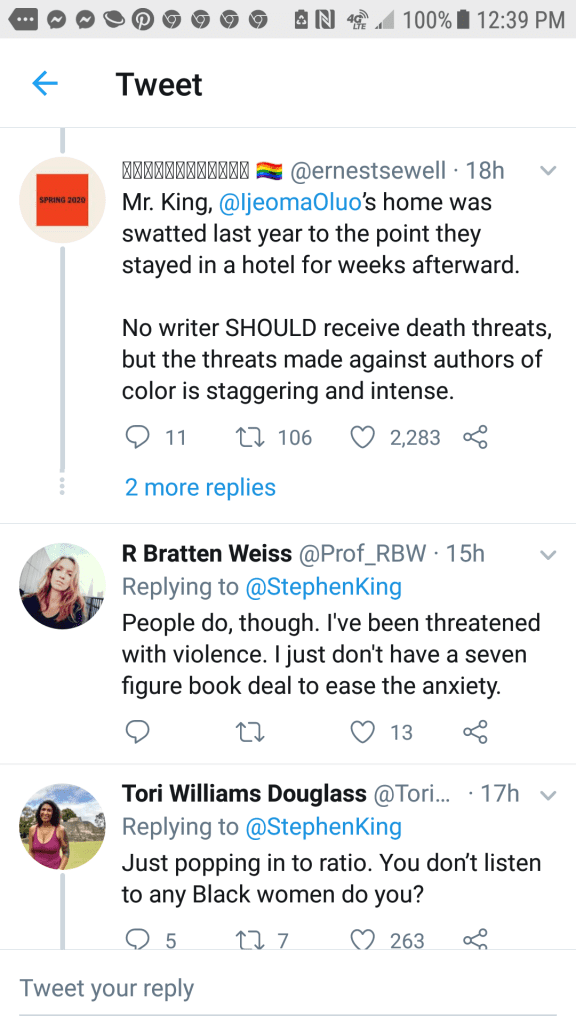 Unfortunately, we are a nation in which writers, especially women and writers of color, are targeted for harassment. It has happened to me. It has happened to writers of significantly higher profile. It just is not on the radar until it happens to the kind of writer who is usually sheltered from it – the kind of writer who gets the seven-figure book deal and the fancy book launches.

This situation highlights a broader issue with privilege, power, hegemony, and violence in our culture. “This is not who we are!” people often say, when news of a shooting or white supremacist terror attack happens. “This is not who we are!” the well-meaning white liberal say, about the rise of Trumpism, the yammering of hatred and prejudice and bigotry at Trump’s rallies.

But this is exactly who we are.

No, not all of us, and not all the time, but often enough. The U.S. exists because we committed genocide against the Native peoples – in some cases through thoughtlessness, but in other cases deliberately – so much so that Adolf Hitler took cues from the U.S. treatment of its indigenous populace, when he was concocting his scheme for wiping out the Jews.

This is who we are as a nation. White Europeans came to this continent, stole it from those who lived here, and claimed to have discovered it. They warred over the land, put down new roots, established a new nation claiming to be based on liberty – while their entire political economy depended on keeping their fellow humans as slaves. Slavery, like genocide, was explicit in the conditions of our real, as opposed to our theoretic founding. And even after finally slavery was legally ended, those who had been enslaved were still abused, segregated, beaten, tortured, and made slaves again, even if in subtler ways such as mass incarceration, or being repeatedly force into low-wage menial labor.

For most of us, this is not our native soil, yet we have repeatedly acted as though others seeking to come here are invaders, a threat to our sovereignty. Every wave of immigrants, unless they were white and genteel, faced discrimination. We put Japanese Americans in concentration camps. We even turned away Jewish refugees who fled the Nazis.

We don’t want to admit it. We want to focus on the good things in our history. We like to focus on our emphases on freedom and natural rights, not on the many ways we have violated those rights. We like to imagine that our wars have all been for freedom, when usually they have been for money or power or colonial privilege.  We pat ourselves on the back for ending segregation, as though white Americans hadn’t fought back, with anger and violence, against the Black civil rights activists and their allies who achieved it.

January 23, 2020
Trump's Attendance At the March For Life Is Significant - But Not In the Way His Supporters Claim
Next Post