Reading Plague Novels In a Time of Pandemic

It’s official. The World Health Organization has declared COVID-19 a pandemic, which means the virus is rapidly spreading in multiple nations around the world. Reports from China and Italy paint a grim picture of what could be in store for us if we don’t take precautions: insufficient hospital beds, insufficient respirators, medical personnel having to make agonizing decisions over which emergency case to treat.

I found out yesterday that the literary conference I was supposed to present at in Boston, Muse and the Marketplace, has been canceled – and I was relieved, because I had already decided, based on the reports I was seeing, it would be imprudent for me to travel there and risk bringing back the virus to my remote county with its dearth of health care facilities and multiple uninsured persons. I especially was concerned about unwittingly passing it on to my parents, who live next door.

I was originally thinking of attending Equine Affaire in Columbus, if I didn’t get to Boston, on the grounds of “well, it will just be a bunch of horse people trailering in from rural areas” – but, no more. Now I’m planning on sitting tight, and focusing on my spring gardening, since who knows what sort of food shortage situations the year may bring?

Even before the Trump administration made cuts to public health and private health insurance programs, this nation was ill prepared to deal with a health crisis of any sort. We have too many people who are uninsured and therefore afraid to go to the emergency room. Our workers can not take off when sick, due to lack of paid leave, and the fact that often only one paycheck is all that stands between survival and desperation.

When I opposed the Trump campaign in 2016, one of my main worries was that, should the nation find itself in some form of crisis, a leader as inept as he is would surely make it worse. At the time I had in mind international disputes and upheaval; I had not considered the possibility of a pandemic.

I am hoping that there are enough sane and competent individuals across our nation, both in government and in private positions, to make up for the bumbling incompetence of our president and his administration. But I can’t count on this. I can’t count on a nation that elected Donald Trump to be sober and pragmatic in a time of crisis. And as mentioned in my previous piece, the preponderance of quack religiosity and rejection of science makes me all the more concerned. People with whom I studied philosophy and politics on a graduate level are sharing conspiracy theory nonsense, so not even our precious liberal arts education is inoculation against this species of foolery.

Nonetheless, I am turning back to books to help me process what is happening in the world.

And apparently I’m not the only one: the past few weeks have seen a surge of interest in pandemic or plague literature.

The most obvious one people are discussing is, of course Stephen King’s The Stand. King even had to take to Twitter to remind his followers that COVID-19 is not like the superflu that wipes out most of the population, in his story: “No, coronavirus is NOT like THE STAND. It’s not anywhere near as serious. It’s eminently survivable. Keep calm and take all reasonable precautions,” he said.

Still, King’s novel – as well as Atwood’s MaddAddam trilogy, and novels dealing with historical plagues and pandemics, such as The Betrothed – remind us that at these times what we have to fear is not only the foreign germ or agent that infects our bodies, but the mindless chaos that resides within humanity itself. This might be why so many people are alarmed at the idea of panic as more dangerous than the virus, even if they persist in confusing the sensible precautions of self-quarantine and social distancing as “panic.” Panic is not staying home and working remotely. Panic is not canceling conferences and meetings. Panic is what the dystopian plague novels depict: rampant upheaval, violence, looting, and rape.

In The Stand, the outbreak of a superflu not only brings out the worst in humanity; it brings out a kind of archetypal figure of violent misrule, the human-inhuman Randall Flagg. And among the survivors, people – especially young men, the aggrieved, the nihilistic – flock to him. The others, holding onto humanity and community, remain with Mother Abagail, who represents that within us which protects and peacefully endures. What struck me most about the story, on first read, was how the motivations of Flagg’s followers – gleefully disruptive, devotees only of destruction and revenge – reminded me of the MAGA movement. I was also struck by how a proprietary attitude towards women was a motivating factor for those who joined Flagg’s cohorts. It reminded me of what I’d read about periods of extreme disruption in history, and how easily taboos on rape and assault get jettisoned.

Another pandemic novel that frequently makes the list is Emily St. John Mandel’s Station Eleven, but that novel was less satisfactory to me. As one who grew up being trained to survive an apocalypse, I found the details of the story unrealistic. The most overt unrealism was in the improbability of the survival techniques. For instance, the traveling players ride in gutted vehicles pulled by horses, even in the hottest of temperatures (which is when a horse is likely to overheat and die). When grazing is scarce they go into the fields to pull grass to feed the horses they rely on (which takes forever, even with a scythe, and even when you’re just feeding plump ponies). I can guarantee you that if you tried this in real life, those horses would be dead within weeks. I was irritated at how blithely the author just assumed she didn’t need to google the details that we country folks are aware of. She seemed to be writing from a position of comfortable remoteness from any real necessities of survival, although she did have fun portraying her heroine as a knife-throwing badass (working on it, myself).

I admit that I love the idea of keeping art alive after an apocalyptic collapse of culture, which is what Station Eleven depicts. I’ve imagined myself reciting Shakespeare soliloquies in caves and around fires. I’ve told my children it’s important to hone their memories, because we are the bearers of all the culture and words that have gone before us. I just don’t think it’s going to save anyone, anymore. I no longer believe in the power of culture and education to create communal bonds of mutual responsibility and virtue. And history indicates that I am right to doubt.

I am picking up The Stand again, anyway. It’s a little like looking in a mirror at 2 AM: distressing, but why hide from who we are? The best and the worst in us.

Other plague novels to read if you are similarly inclined:

Gabriel Garcia Marquez, Love in the Time of Cholera 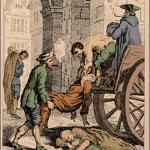 March 10, 2020
COVID-19 and Religion: Rash Providentialism Is Going To Get People Killed
Next Post

March 16, 2020 What Is Knowledge? Religion, Atheism, and Belief
Recent Comments
0 | Leave a Comment
Browse Our Archives
Related posts from suspended in her jar