Catholics Are De-Toxing From their Experiences With Traumatic Religion. How You Respond to them Matters 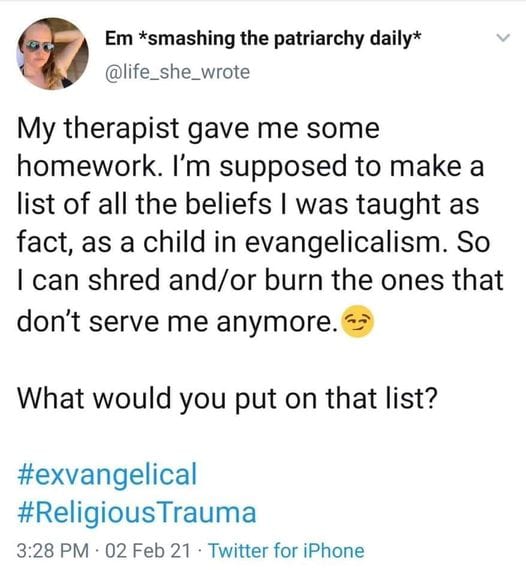 A few days a meme came across my Facebook feed. I thought it was relevant to a lot of recent conversations I’d had with friends, as well as to issues I’d touched on in my post about abusive religion. The meme was a screenshot from Twitter which read:

My therapist gave me some homework. I’m supposed to make a list of all the beliefs I was taught as fact, as a child in evangelicalism. So I can shred and/or burn the ones that don’t serve me anymore. What would you put on that list? #exvangelical  #religioustrauma

I was surprised by the outpouring of responses I received from my Catholic, Catholic-adjacent, and ex-Catholic friends. Some of them detailed actual magisterial teachings they had found harmful. Many others described common ideas, mantras, and beliefs one is likely to encounter in Catholic settings. Quite a few commenters addressed popular Catholic ideas about sex and marriage, including the idea that “it’s your job to get your spouse to heaven”, and that “NFP brings spouses together.”

One commenter mentioned that it took them years to get past the idea that sex is fundamentally bad. Others agreed. Of course, the official response to this is that “the Church does not teach that sex is bad,” and even “the Church’s teachings on sex genuinely highlight its goodness and sanctity in a way that secular or other understandings do not.”

Yet clearly this is not how many people, including many very educated Catholics, have experienced it. It would be wrong to say to them that they “obviously you haven’t encountered the church’s real teachings on sex, because if you had, you would understand how beautiful these teachings are.” For one thing, this would be gaslighting. For another thing, many of the people who have ultimately found themselves struggling with the idea that sex is bad not only were well educated on magisterial teaching but have written on and defended it themselves.

It seems that we are regularly pressed to assent to the “beauty” of certain beliefs, even when we are not experiencing them as beautiful at all, but as painful. And the response to that, which is usually an invitation to discover beauty in pain, becomes a whole other issue that people in therapy from religion have to deal with.

One commenter, Genevieve, shared one such dangerous view of suffering she’d been told: that “God breaks you down so He can build you up in His image. At the time, I knew enough to call bullshit since the school (high school) was using that as code for ‘WE break you down so that WE can build you up in OUR image.’ But I didn’t quite get what a horrible view of God that is.”

Another commenter shared a view many of us were familiar with: “’God designates some people to be victim souls so He can give them suffering and bad luck and mystical visions for the salvation of souls and that’s why you’re always sick.’ To this day, when I stub my toe I’m afraid it’s because God is forcing me to be a saint.”

When we say that we are suffering and told that our suffering is somehow good, this is exceedingly dangerous. It leaves us unable even to say when something that is done to us—or to another—is right or wrong. I suspect that much of the inability of right-wing Catholics to make basic moral judgments in recent years (to see that assault is wrong, that keeping children caged is wrong, to see it’s wrong to jeopardize the health of others because you don’t want to mask) may be due to this warped sensibility.

When we say that we are suffering because God has designated us to suffer, we are creating an image of God as a sadistic sociopath—and legitimizing the actions of actual sadistic sociopaths as acting according to God’s will. This ends up protecting abusers, if we can’t distinguish that they are acting the opposite from what Jesus taught–if we have been primed to view abuse as somehow acceptable.

Another commenter, Brendan, put his own takeaway quite bluntly: “That God is a psychopath; that shame, fear and misery are somehow virtuous; that not being heterosexual is evil; that hell is eternal, that the Eucharist is for the worthy, to name a few.”

Another commenter identified a belief I have long held to be harmful as well as simply wrong: That “God has a plan for you. You can stray from God’s plan for you, and that’s what causes misery in life.” Just how toxic and deadly this belief is was highlighted when a friend of mine who had been the victim of clergy abuse responded that this was the argument used by a powerful priest to explain to her that she’d brought misery on herself by going public with what had happened to her. “God’s plan” according to this priest—a highly educated man, who was a university president for many years—was apparently for her to remain silent.

Now, if you have been reading along, what is your response at this point? Are you angry or annoyed? If you are angry or annoyed, are you directing your negative emotions at those who you perceive as questioning or attacking your faith? Do you think that they are being selfish, self-absorbed, insufficiently willing to embrace suffering for the sake of holiness? Do you feel the need to correct them since clearly they must not be understanding the faith sufficiently? If I were to tell you that some of these people are extremely well educated in the faith, probably better than you are, would you become resentful? Do you feel that the work people are doing to recover from religious trauma is an attack on you because you enjoy your religion just fine, or have simply decided that not enjoying it is your duty? Do you feel you are better than these people because you have remained “faithful”?

Or are you angry that people have been subjected to this, that Catholic institutions have gotten away with abusing others in the name of god, that powerful priests have raped and gotten away with it, that other priests have covered for them, that lives have been damaged, that the Gospel of Jesus has been appropriated by the powerful and used as a stick to beat the vulnerable? Do you want to work to reform the institutions that can be reformed, or even replace them with others that will genuinely follow Jesus’s teachings, and prioritize the Beatitudes over authoritarianism? Do you think it’s important to reopen discussions about certain beliefs which are not even central to the creed, but which end up being prioritized over Jesus’s core teachings, and weaponized against struggling persons?

February 26, 2021
How Has the Pandemic Changed Us? Has It Changed Us Enough?
Next Post 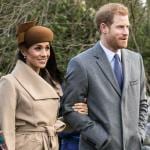