Yes, I’m using Witch as a verb.  You have to admit it’s catchy, cause you ARE here aren’t you? And well, what better time to get over yourself right? Exactly!

Because when it comes to Witchcraft, sometimes we *are* our biggest problems.  It’s not the gods, it’s not the tools, it’s not the phase of the moon or the position of the sun.  It’s not the clothes you wear or the crystals you adorn yourself with.  And it’s certainly not what other Witches are doing or should be doing.  Nope. It’s you.  (Yes, hypothetical and rhetorical you, yes, but no really, it’s you, that person in the mirror, on the other side of the screen.)

Before you clutch your pentacles in shock, dismay, and offense, I mean it in the best possible way.  We’re all you – and the best news is that change is always possible.

Because isn’t that the point of Witchcraft? Change and growth, movement and altering patterns.  Shifting ideas and things. Yes? Yes.

Here’s the thing about moving, shifting, and changing – it’s pretty darn hard to do when you’re weighed down with a ton of baggage.  It’s hard to see possibilities when you’ve got blinders on, telling you to only look one way.  It’s hard to get where you’re going if you refuse to read the signs.

Now, I’m not a big celebrator of Sabbats, but the Autumnal Equinox sure brought a lot of the same conversation to my door regardless in the course of the last week or so.  With a multitude of excellent minds and hearts I must say. About the potential of ritual, the meaning of magick, and most importantly, the inability to trust and believe in your own power.  I guess there’s no better time to get a good grasp on your personal power then when we’re hurtling towards the darkest time of the year right?  (Sorry Southern Hemisphere folks!)

So what am I talking about?  I think it’s the fear of success.  WHAT!? you say? At least once a week, I hear someone say, “Yeah, well I did that spell and it actually WORKED!  Now I don’t do magick anymore.”  Or “I called upon this deity, and something actually happened! So I took down my altar…” Why did you even try it in the first place then? That’s sort of like gathering the ingredients for a cake, mixing them together, putting them in the oven, and then when you actually get…(surprise!) a cake, saying “That’s it, I’m not baking anymore! It actually came out edible!”

The same is true for ritual, and why I think a lot of folks seem fine with mediocre ritual.  If nothing big happens, then at least everything’s OK right? Again, what’s the point of doing something if you don’t mean it?  What fears are you holding on to? What out-dated ideas from previous religions and bad books are closing your sight to being, seeing, and doing more?  Most of the time, we are the ones getting in our own way, draped in the cobwebs of small ideas. We latch into this bizarre fear of what if we’re right, if what we’re doing actually means something.  We also worry if we’re doing it wrong, crippled by insecurity.  It’s a good time to ask yourself:  Do you wish to walk this path, or do you just want to wear it?

Witchcraft has been around a very, very, very long time.  No, I’m not talking about Wicca or Neo-Paganism. I’m talking about the understanding of the connection between us and spirits, the unseen world and forces around us, and the power to affect it.  People all over this planet have been tapping into it since our earliest days, and there’s a reason for that. I’ll give you one guess why.

Because it works. It doesn’t require a pile of arcane wisdom, secret oaths, blood sacrifices, and poison potions to work. (Though I’m not about to take the fun out of it for everyone).  Witchcraft requires focus, insight, and trust.  I’m not going to say belief because that’s a loaded word.  It doesn’t require having the right assortment of tools, stones, and skulls (proven by beautiful Instagram photos) – but they do help some people focus. You don’t have to have the latest limited edition grimoire or oracle, but you do need to be able to look within yourself and the liminal to see beyond. You don’t have to believe in any gods for magick to work, but it sure does help to trust in yourself.

Imagine what you can “bake” if you actually put trust and focus into what you do? If you apply vision to what you wish to have happen, instead of meh-ing through it?

So if you want to be a Witch – beyond a sexy label, to call yourself such a word and know it to be true, then it’s time to Witch like you mean it.

So mote it be Witches. 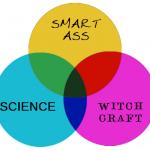 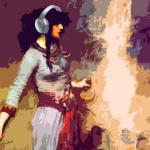 September 26, 2017 Audio Inspiration for Witches - The Music
Recent Comments
0 | Leave a Comment
"Hella sigil! Blessed Be its use!"
Pitch313 A Sigil for Reproductive Rights
"Just stumbled upon this post now - it randomly came onto my feed. I've been ..."
Kathy The Narwhal and the Playful Witch
"Thank you for this story. Now I know why my home feels so off. I ..."
Deborah Bliss In The Witch’s House, Weird is ..."
"Great expression!"
Pitch313 Simple Magic IS Advanced Magic (6 ..."
Browse Our Archives
Related posts from A Modern Traditional Witch

Pagan
Moving With the Major Arcana
A Modern Traditional Witch 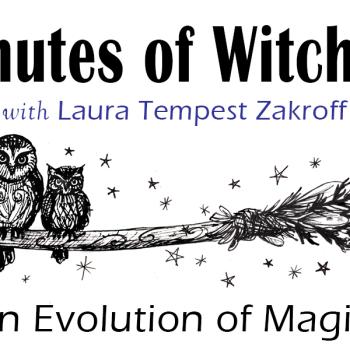