It’s not often that I congratulate Cardinals of the Roman Catholic Church, but I feel I must, in this case, extend my warmest congratulations to Cardinal Keith O’Brien, who won the coveted “Bigot of the Year” award from UK gay rights organization Stonewall recently. It is truly well-deserved: he wrote a fantastically hateful article on the topic of equal marriage entitled “We cannot afford to indulge this madness”, arguing that “such [same-sex] relationships are harmful to the physical, mental and spiritual wellbeing of those involved”, claiming that by extending the right of marriage to all adult couples we are “dismantling a fundamental human right”.

Representatives of the Catholic Church have, predictably, been up in arms, and all the usual nonsense about the persecution of the church and the “aggressive bullying” of gay rights activists has been trotted-out, with the useless acquiescence of much of the press. The BBC reports that “Sponsors of the awards, Barclays and Coutts, have said they will axe their funding if the Bigot of the Year category is not dropped next year.” Disappointingly spineless.

I can truly say that nothing has been more beneficial to my physical, mental and, yes, spiritual wellbeing than meeting my boyfriend. O’Brien is a bigot. He deserves his award. 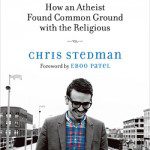 November 5, 2012 "More Than Half Way": Why I'm Proud to Work With a "Faitheist"
Recent Comments
0 | Leave a Comment
Browse Our Archives
get the latest from
Nonreligious
Sign up for our newsletter
POPULAR AT PATHEOS Nonreligious
1