It’s strange what catches the attention. What I thought was a rather innocuous and boringly-balanced post on the strengths and weaknesses of Rebecca Watson’s recent talk at Skepticon 5 has sparked a barrage of commentary, not all of it flattering to yours truly. Most of the criticism seems to be along the following lines: “You are being too generous to Watson. You are letting her off the hook for her mistakes. We should demand a higher standard!”

I’m not entirely unsympathetic to such criticism: I have become aware that I am often somewhat more forgiving of error than others I know. I have what I believe are good epistemological and ethical reasons for this, but they are beyond the scope of this post. Here, as  companion piece to Responsible Reading, I want to offer some thoughts on Responsible Writing. For, just as readers and audience members have a duty, I argue, to consider the genre, context, and other relevant characteristics of a communication when judging it, writers, too, have a responsibility to communicate clearly and effectively with reference to these same characteristics.

This responsibility goes beyond the basic concern for truth which must be the bedrock of all communication which aims to educate. Obviously a writer is responsible for ensuring that the data they present is as accurate as possible, for organizing the data in a way which is not misleading, and for generally guiding the audience to understanding. But they also need to be careful to pitch their material at  level appropriate to their audience, to think of the audience’s likely prior experiences and to take those into account, and to always ask “Will I likely be misunderstood?”

This last is critical: when writing – either for print or presentation – it is essential to put oneself in the shoes of the audience. The question should not be “Do I understand what I mean?” but “How might they understand what I have said?” Much miscommunication can be avoided if people take the opportunity to give their presentation before a critical test-audience and ask them how they understood it. Sometimes the results are surprising. I give a very large number of public presentations, and I’m frequently amazed that things I say are understood in the way that they are. “How could you think I meant that?”, I sometimes find myself wondering.

This practice is particularly important when speaking, because the audience does not have the benefit of referring directly to your words for clarification. In general, I tend to include numerous explicit disclaimers in my talks which I would edit out were I writing for the page. For instance, when speaking I make frequent use of the “anticipatory disclaimer”. It is not uncommon for me to explicitly state what I am not arguing, so that I can be as sure as possible people take from what I am saying what I meant to convey. Combined with the “test run” described above, this can be powerful: the test run offers the opportunity to uncover common misconceptions, and then an anticipatory disclaimer can be added which specifically targets the potential area of confusion.

The problem with all this is that it can be unwieldy. A talk has many purposes, only one of which is to inform. If you also want to inspire your audience, offer them something poetic and rousing,  or make them laugh, constant obsession over explanatory minutiae can hold you back. Furthermore, there is always the possibility of someone misunderstanding you. Even when you have pitched the material perfectly to your audience, have worked to make a section clear, and have included appropriate disclaimers, people will still come away with exactly the opposite view to the one you intended to convey. I was astonished recently, for instance, to receive notes from students who attended one of my talks who seemed to have learned that Humanism is a religion (!) which required belief in God and hoped for an afterlife. Of course I said precisely the opposite. People’s existing schema are very strong indeed, and sometimes they’ll twist your words 180 degrees to fit their preconceptions despite your best efforts.

Nonetheless, you should still make your best effort. Its part of the responsibility of any author to try to ensure they are clearly understood. This is why, in my previous post on Watson’s talk, I agreed that critiques like the one Ed Clint offers are useful and that Watson should change those parts of her talk which were wrong and clarify those sections which have caused confusion. In these areas, she dropped the ball and didn’t write as responsibly as she might. Her response – to acknowledge the errors and say she’ll fix them in an upcoming talk – seems to me the correct one, and we will be able to judge the sincerity of that commitment once the talk has been given again (I, for one, am sure she’ll make appropriate modifications).

December 4, 2012
Buy All the Things! - The Center for Inquiry Has a New Store!
Next Post 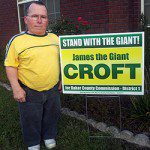 December 6, 2012 James the Giant Croft - Google Alerts Me Of My Nemesis
Recent Comments
0 | Leave a Comment
Browse Our Archives
get the latest from
Nonreligious
Sign up for our newsletter
POPULAR AT PATHEOS Nonreligious
1

Russell Moore: Not Really a Hero
Roll to Disbelieve
Related posts from Temple of the Future