I am not at all surprised to report that American Atheists have lost their lawsuit against the National September 11 Memorial & Museum. Associated Press reports:

U.S. District Judge Deborah Batts rejected the arguments of American Atheists…Batts wrote that the cross and its accompanying panels of text “helps demonstrate how those at ground zero coped with the devastation they witnessed during the rescue and recovery effort.” She called its purpose “historical and secular” and noted that it will be housed at the museum in the “Finding Meaning at Ground Zero” section with placards explaining its meaning and the reason for its inclusion. It also will be surrounded by secular artifacts.

“No reasonable observer would view the artifact as endorsing Christianity,” the judge said. She added that the museum’s creators “have not advanced religion impermissibly, and the cross does not create excessive entanglement between the state and religion.” She said the plaintiffs also failed to allege any form of intentional discrimination or cite any adverse or unequal treatment on the basis of their religious beliefs.

I opposed the lawsuit at the time it was filed, demonstrating that it was based on a series of misconceptions regarding the facts of the case, that it was frequently misreported by American Atheists themselves, and that there were good secular reasons for the cross to remain in the museum. My arguments from November 2012 parallel the judge’s ruling quite neatly:

the cross appears in a secular context – the Memorial Museum, a separate entity to the Memorial quadrant, which is yet to open and which you must pay to enter. It is surrounded by other artifacts from the aftermath of the attacks (including artifacts representing other religious faiths and none), which represent the collective human response in an exhibit which seeks to “explore the prodigious efforts of recovery and rebuilding at the three attack sites”. It is supplemented with labels which explain the significance of the cross to some, its history and genus.

The cross, here, doesn’t seem to symbolize the fallen in the same way it would were in standing alone in the Memorial gardens. Rather, it seems a record of secular history, of sociological and anthropological importance. “Here is an example,” the museum seems to say, “of how some human beings responded to this crisis. We present it here so you may consider the implications of this fact.”

This presentation of the cross, it seems to me, is not only unobjectionable, but desirable… The cross, presented in an exhibit with accompanying information and alongside other artifacts, helps us all, Christian or not, to better understand how people have responded to the crisis. It also records a piece of cultural history which people would otherwise be forced into a religious space to see. It therefore plays an important and legitimate public education role in this context, and does not, in my view, threaten the separation between church and state. Further, placing religious artifacts in publicly-funded museums (like the Smithsonian museums) is a widely-accepted secular practice which is not seen as an unnecessary entanglement of religion and government.  Like housing a Bible in the school library, there is nothing objectionable, and much of potential benefit to all, in this second scenario…

The cross, housed in the Museum exhibit, is telling its “secular narrative”, not the fundamentally religious narrative which it told when it was outside the Museum. Indeed, housing the cross in a Museum serves to secularize the symbol, by making it clear that it is merely one potential response among many, and not the response to the attacks.

This is an unfortunate result for American Atheists, but a good one for the Museum and those who are interested in the response of the American people to the 9/11 attacks. The result was entirely predictable and the wound, sad to say, self-inflicted. Hopefully this will encourage American Atheists to follow a little more closely their own legal philosophy:

For every case presented to us, we must ask, “Is this a hill worth dying on?”

Litigation is expensive. We do not need to waste thousands of dollars on lawsuits that, given the facts at issue, the state of the law at this time, and the disposition of a given court, are doomed to certain failure. And in losing such actions, we do not need to be in the position of creating even more bad law for our descendents to clean up. We cannot make good law and ensure freedom within our nation by litigating bad, or even marginal, facts. And we will not gain credibility by losing cases and thereby permitting the other side to mock our efforts and to laugh at us. “There go those Atheists again. They will lose like they always lose. When will they learn to sit down and shut up?” We must not give them that ammunition.

Someone, filing this suit on the basis of inaccurate information and persisting way beyond the point their position was untenable, should have heeded that advice in this instance. 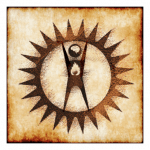 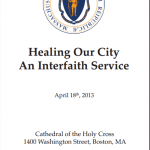 April 18, 2013 After Boston Bombs, Atheists Denied Healing
Recent Comments
0 | Leave a Comment
"Ten years since dad died, while I held him, five since mum. Not a day ..."
Steve Taylor Life Without Dad
"People who think that chopping the ends of male babies dicks off is a path ..."
Steve Taylor Former Chief Rabbi of Great Britain ..."
"Mike Brown wasn't murdered, not sure how you missed that minor detail."
Goat Plissken Closing the Doors of the Temple
"Thus we conclude with that classic chestnut that characterizes all dispassionate rational discourse: angrily storming ..."
Theo Sadana Skepticism and Social Justice
Browse Our Archives
get the latest from
Nonreligious
Sign up for our newsletter
POPULAR AT PATHEOS Nonreligious
1