Why Protest a History Museum?

Tonight I attended a protest outside the Missouri History Museum, and since some have asked me why, I thought I’d write a quick post about the issues as I see them. 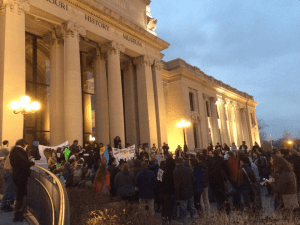 The protest stemmed from the museum’s decision to cancel an event which would have explored the concept of solidarity through the experience of activists from the Organization for Black Struggle, Latinos En Axion, and the St. Louis Palestine Solidarity Committee. The event was advertised on its website (see Mahro Jahangiri’s image below), and the event description clearly noted the participation of members of the St. Louis Palestine Solidarity Committee. The title of the event – “Ferguson to Ayotzinapa to Palestine: Solidarity and Collaborative Action” – clearly indicates the intention of the event to include the Palestinian experience as part of the discussion. 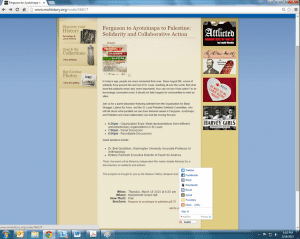 The event was scheduled for tonight, yet was cancelled just two days ago: the reason given was that the Museum had not been aware of the participation of speakers addressing the topic of the experience of the Palestinian people, and that the event had become too different to the initial proposal.

Clearly, this is untrue: the advertisement of the event on the Museum’s own website with that information included is enough to demonstrate the fact that the Museum was aware of the expanded nature of the event and even was willing to promote it. The conclusion must be drawn, instead, that there was something about drawing the parallel between experiences of oppression in Ferguson, Mexico, and Palestine which was offensive to someone in the Museum’s hierarchy, and so a long-planned event was cancelled (the other conclusion – total incompetence – is also disappointing). I cannot imagine, had LGBTQ speakers been added to the roster, and the title been changed to “Ferguson to Ayotzinapa to Stonewall”, that the museum would have reacted similarly.

This is outrageous: no institution should act as shoddily as to invite a panel of speakers and then dis-invite them at the last minute, while lying about why the decision was made. That’s just poor manners, and the Brit in me abhors that.

The broader principle at stake here, though, is much more important: a publicly-funded museum today made the decision to limit the range of political viewpoints that it is willing to present to the public – the people who effectively own the museum. We, the people the museum exists to serve and educate, were denied the opportunity to hear a perspective because someone working in that museum didn’t like what they imagined a panelist might say. That’s a scandal, and it’s worth protesting.

It should not need to be said that supporting the exploration of different political views, different ideas of solidarity – including ones which recognize the Palestinian experience as one of oppression – is in no way anti-Semitic. Whatever your views on the relationship between Israel and Palestine, you should agree that a public museum should never cancel an event because it is concerned about the political nature of its content. If they were genuinely concerned that the content of the panel would become oppressive itself, then that is what moderators are for. Cancelling an entire event because you don’t like what people you have invited might say is disgraceful.

I like the Missouri History Museum – I’m a member and support its many excellent programs. Indeed, I generally think it is a socially-conscious and inspiring example of what a museum could be. In this case it made a bad mistake, and we protesters were there to hold our museum to a higher standard. No #SelectiveHistory! 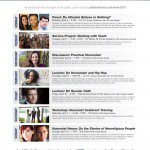 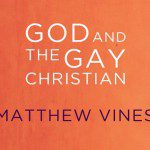 May 4, 2015 God and the Gay Humanist - A Response to Matthew Vines
Recent Comments
0 | Leave a Comment
Browse Our Archives
Follow Us!