A Peter Wehner Opinion Piece in the New York Times today laments the ascension of Donald Trump as the anointed candidate of American Evangelicals, expressing amazement that Trump “won a plurality of evangelical votes in each of the last three Republican contests” and has gained the endorsement of prominent evangelical leaders. “If this embrace strikes you as discordant, it should,” Wehner writes, before outlining all the ways in which Trump should be unacceptable to evangelicals.

As an English atheist I’m an outsider both to American politics and to Christianity. Perhaps that’s why I see things differently: Trump is not a perversion of American Christianity, but its apotheosis. What Wehner calls “inexplicable” – the appeal of Trump among evangelical Christians – I see as totally predictable, even inevitable: Trump is the creation of a fetid political culture which has been fostered, for decades, by the religious right.

Mr. Trump’s character is antithetical to many of the qualities evangelicals should prize in a political leader: integrity, compassion and reasoned convictions, wisdom and prudence, trustworthiness, a commitment to the moral good.

He is half right. Trump is antithetical to these qualities. Yet American evangelicals – for decades the most prominent face of American Christianity – have long eschewed them. That they do so now by supporting Donald Trump should come as no surprise: they are merely continuing their sordid tradition. It feels strange to say it, but not supporting Trump would, for the religious right, be the hypocritical move.

Why do I say this? Because the religious right in America has always been a political philosophy based on bullying, pandering, projecting strength to hide fear and weakness, and proud, aggressive ignorance. That’s what it’s been about from the beginning. Trump has merely distilled those elements into a decoction so deadly that even some evangelicals are starting to recognize the venom they have injected into American culture.

American evangelicalism has never supported “reasoned convictions”: the religious right has long supported the teaching of anti-scientific material in public schools, alongside the imposition of their religious views on others using the power of the government (the popular campaign to emblazon “In God We Trust” on police cars being the most obvious current example).

Neither wisdom nor prudence are served by evangelicals’ insistence on abstinence-only sex education, which unwisely and imprudently increases rates of teen pregnancy while effectively lying to children about their own bodies.

The purported evangelical value of compassion is poorly evidenced in their decades-long campaign against the rights of LGBTQ people: organized homophobia in the USA is an essentially religious activity, with evangelicals leading the charge to deny us equal rights. At every step on the journey to LGBTQ equality evangelicals have formed our primary opposition, mounting well-organized, well-funded, and often viciously personal campaigns against our rights. Compassion, indeed!

And nowhere in the constant alarmism of the religious right – “America is under threat from godless progressives who wish to destroy our freedoms!” – do we find anything approaching “a commitment to the moral good.” The religious right wants an America that is good for them and to hell – literally and metaphorically – with everybody else.

Where is Jesus in this? Nowhere. Jesus never was and never has been the focus of politicized US evangelicalism. It is transparent to anyone who views the megachurch spectacles of a Rick Warren or a Joel Osteen that the story of Jesus is useful only insofar as it offers a vehicle for the regressive right-wing politics these pastors prefer. Jesus has become the ultimate fig leaf, a flimsy shroud to drape over social views which would otherwise be revealed as nakedly evil. That the likes of Pat Robertson and Jerry Falwell Jr. endorsed Trump makes perfect sense: they are shamelessly self-promoting bigots who, to give just one sample from a lifetime of grotesqueries, blamed the 9/11 attacks in part on feminists and gays. These are precisely the sort of people Trump should appeal to. I’m surprised by Wehner’s surprise.

What appalls more genteel conservative evangelicals about Trump, this outsider suspects, is not his views or his character, but that he is saying so blatantly what their movement has always believed, ripping off the fig leaf to display the tortured form beneath. They are looking in a Trump-shaped mirror, and don’t like what they see.

February 21, 2016
Don't Put an Atheist on the Supreme Court
Next Post 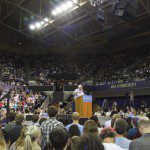 March 16, 2016 Bernie Has Already Won His Revolution
Recent Comments
0 | Leave a Comment
"Ten years since dad died, while I held him, five since mum. Not a day ..."
Steve Taylor Life Without Dad
"People who think that chopping the ends of male babies dicks off is a path ..."
Steve Taylor Former Chief Rabbi of Great Britain ..."
"Mike Brown wasn't murdered, not sure how you missed that minor detail."
Goat Plissken Closing the Doors of the Temple
"Thus we conclude with that classic chestnut that characterizes all dispassionate rational discourse: angrily storming ..."
Theo Sadana Skepticism and Social Justice
Browse Our Archives
get the latest from
Nonreligious
Sign up for our newsletter
POPULAR AT PATHEOS Nonreligious
1

Building A Roadmap for More Humanistic Public Policy
Let's begin with an update. This is my last day, again, as...
view all Nonreligious blogs
What Are Your Thoughts?leave a comment
Copyright 2008-2020, Patheos. All rights reserved.