My association with the Humanists at Harvard began with a happy accident. I had moved to Boston to study, and found it mostly similar to the culture I had left back in London. People were worse at queuing, never waited for you to get off the metro before getting on, and had a strange propensity to ask “How’s it going?” before leaving without receiving an answer (a habit I have now picked up). But, in general, Boston and London are similar: both are great global cities with world-class universities and rivers running through them, cosmopolitan wonderlands for the driven and the smart.

But one major difference between the USA and the UK stuck out to me: even in coastal Boston, people were much more religious. I was shocked, in fact, in my first weeks in the graduate student dorms on campus, to meet a fellow student who had never met a nonreligious person. This person, when they found out somehow that I didn’t believe in God, literally laughed in my face, as if it was the most ridiculous thing he had ever heard.

This was an extreme reaction, but it represents the deep religiosity of US culture. Religion – particularly the Christian religion – plays much a larger role in public and political life than is true in the UK, where one assumes people are nonreligious unless they mention otherwise. In my friend’s reaction I had received a taste of what I would soon learn is a deep distrust of nonreligious people – and particularly atheists – which has persisted for decades in the USA.

This drove me to seek out community with other Humanists. I had been interested in Humanism since my undergraduate days when, as a teenage spiritual seeker, I had read the great founding texts of many of the world’s largest religious, determined to discover what truth might lie within their pages. But it wasn’t until I came across the second Humanism Manifesto that I found my spiritual home. The moment I read the preamble, which declares “New statements should be developed to supersede this, but for today it is our conviction that humanism offers an alternative that can serve present-day needs and guide humankind toward the future,” I knew I’d found the worldview for me. This system of belief, confident enough to declare up-front its own limitations (unlike the great scriptures I had worked through), fit my contentious and questioning intellectual style, and its commitment to human dignity above all fit my growing commitment to social justice.

But it was the experience of othering for being nonreligious which really supercharged my Humanism, made it more a part of who I am, rather than simply something I believe, and it was in the pursuit of like minds that I first met Greg Epstein, Humanist Chaplain at Harvard. He, along with another of Harvard’s chaplains, was hosting a discussion of religion at the graduate student dorm where I live and I, on seeing a poster, decided to go. “What even is a Humanist chaplain?”, I wondered, and I went determined to find out.

When I arrived in the small room set aside for the meeting, I wondered if we would have enough space – there were less than 10 seats around the table. But I needn’t have worried, because when the discussion began it consisted of Greg, his evangelical interlocutor, and me. I was the only person to attend. Swiftly the event became a one-sided affair, Greg and I beating up on our poor Christian friend – and so began my relationship with someone I consider a mentor, who in many ways set me upon the path I tread today.

I swiftly got involved with Humanist live on Harvard’s campus, attending discussion groups (mainly populated with feisty, intellectual alumni) and meetings of the Humanist Graduate Community at Harvard, and this affiliation grew until I was volunteering for the Humanist Community at Harvard as a Research Fellow. Humanism became a major focus of my campus life. I valued the community, which supported me as I worked through living abroad for the first time, my first major long-term relationship, losing an academic adviser, and struggling to complete my doctorate. And I valued a space in which people were willing to explore difficult ideas without censorship or restraint: it reminded me more of the academic environment back home, no holds barred.

But the value of a Humanist community really came home to me when I came out of the closet on a service trip to New Orleans with the Humanist Graduate Community. That community helped me find myself, and I wanted more people to find themselves in a Humanist home, so I was going to help them create one.

Quickly, organized Humanism became a second job: I began to travel to national conferences and local groups to talk about the community we were trying to build at Harvard, publishing articles in The Humanist and other movement magazines. And, as my grad school career went on, I began to realize that my work in the Humanist movement was fulfilling me more immediately and more fully than my academic pursuits. So I started to wonder: What would it look like to be a professional Humanist? Could I be a Humanist chaplain too?

That’s what led me to Ethical Culture, and to St. Louis, Missouri. 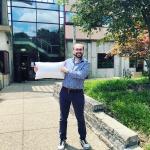 August 10, 2019 Five Years Since Ferguson - The Disillusionment of One White Liberal
Recent Comments
0 | Leave a Comment
"Ten years since dad died, while I held him, five since mum. Not a day ..."
Steve Taylor Life Without Dad
"People who think that chopping the ends of male babies dicks off is a path ..."
Steve Taylor Former Chief Rabbi of Great Britain ..."
"Mike Brown wasn't murdered, not sure how you missed that minor detail."
Goat Plissken Closing the Doors of the Temple
"Thus we conclude with that classic chestnut that characterizes all dispassionate rational discourse: angrily storming ..."
Theo Sadana Skepticism and Social Justice
Browse Our Archives
get the latest from
Nonreligious
Sign up for our newsletter
POPULAR AT PATHEOS Nonreligious
1

How Ravi Zacharias Got Away With...
Roll to Disbelieve
Related posts from Temple of the Future