“James is one of the most important young thinkers in the Humanist movement today, and is incredibly eloquent and entertaining when sharing his ideas. I’m delighted that more and more groups will be hearing from him in the years to come.” – Greg Epstein, Humanist Chaplain at Harvard 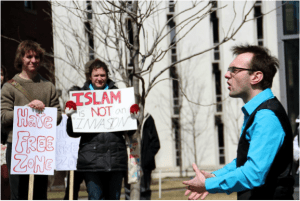 “It is truly a unique experience to be moved to action by speech alone, but James has the ability to enchant a room full of individuals simply with the emotional sway of his words.”
– Charlotte Arsenault, M.Div Candidate, Harvard Divinity School; Intern, Humanist Chaplaincy at Harvard

“I can’t thank you enough for your truly outstanding presentation/workshop Saturday morning.  There were many excellent points, of course, but what really blew me away was how perfectly (and subtly) your presentation itselfwas a demonstration of all the points you were making.  That is a REAL skill and it will make me smile for a long time just thinking about how perfect it was… Well done!!”
– Lauren Becker, VP and Director of Outreach, Center for Inquiry

“James gave an inspiring talk to the Baltimore Ethical Society that raised our spirits and strengthened our sense of purpose in building a vibrant community.”
– Emil Volcheck, The Ethical Culture Society of Baltmore

“James Croft represents the highest ideals of Humanism and its future. His energy and passion for bringing together non-theists to build a better world, gives me the fire I need to be an active part of a Humanist 21st Century.
– David M. Beadle (The Secular Human)

“James is the most articulate and inspiring voice on humanism of this generation.”
– Evan Clark, Co-founder of The Humanist Community of Ventura County

“James is an organizer’s dream: a pleasure to work with, and an eloquent speaker guaranteed to inspire audiences everywhere!”
– Chris Calvey, Organizer of the 2012 Freethought Festival

“James’ talk on the future of Humanism did an amazing job of inspiring and enlivening so many of us who are often exhausted from the isolating experience of living in a region of the country where reason and compassion are so rare. His vision and voice are much-needed, and will help stir the Humanist movement into action.”
– Serah Blain, Executive Director, Secular Coalition for Arizona

“James’ speech on Humanism in Art was intellectually awe inspiring.  His ability to draw parallels between historical works and what we can do through Art to help build a stronger Humanist community is why he is one of the most relevant speakers in the Humanist movement today.”
– Mario Mouton, Lake Charles Freethinkers

“James is a fantastic guest and a wonderful speaker. His talk on reason as a moral value was very well received and gave at least one individual the courage to come out as an atheist to her family.”
– Sean Gillespie, Organizer of the 2012 Skeptics of Oz Conference

“James was easily the best speaker in our lecture series, facing and enthralling a tough crowd! His knowledge and his passion made for an extraordinary evening.”
– Ann McCann, graduate of the Chaplaincy Institute of Maine

” It was an absolute pleasure having [James] speak with us! I think [he] truly inspired everybody there.”
– Richard Dewey, President, the Humanist Society of Greater Phoenix

“James was a fantastic addition to North Shore Community College’s Forum on Tolerance “Many Faith, One Family”.  He helped bring the stereotypical thoughts that I’ve heard to the surface as he articulated that Humanists have and continue to be shut out of American politics and viewed as a people who lack values because of their disbelief in a deity.  James spoke powerfully and with conviction.”
– David Houle, Forum of Tolerance Organizing Committee

“I have never seen our group give a speaker such an enthusiastic standing ovation!  They were energized and inspired.  James’ passion and clarity of message really shine through.  His mastery of the Q&A session was remarkable. Thank you James!  I hope you will return again soon.”
– Anne Mardick, President, Americans United for Separation of Church & State, Greater Phoenix Chapter

“James Croft is one of my favorite speakers. His talks are entertaining, informative and optimistic, but also serve as calls to action for Humanists who wish to better live their values and put their principles into action. When I listen to James I’m always prepared to take notes.”
– Steve Ahlquist, a founding member of the Humanists of Rhode Island

“Behind the podium, James strikes, and maintains, a radiant balance between remarkably creative commentary on the movement’s most imminent questions, and delightfully captivating rhetoric and charm. He seeks not only to drive and inspire his audience, but to welcome them as comrades into his own journey. A voice that humanism, and society, should absolutely treasure.”
– Walker Bristol, Tufts’ Freethought Society

“James is a dynamic speaker: entertaining, upbeat and engaging. We look forward to having come back.”
– Jennifer Brauer, Humanist Association of San Diego

“Recent political and demographic shifts suggest that there is more interest than ever before in building pluralistic communities in the United States.  James Croft, a Research and Education Fellow of the Humanist Community at Harvard shared his own inspiring sense of how Humanists can take the lead in building a better, fairer, and more tolerant society.”
– Amye, Founder of the Secular Student Alliance at University of South Alabama

“James…I listened to the [Unbelievable?] show today, and thought you did an incredible job of it — one of the best shows in ages. For most guests, I find myself wanting to jump in with an answer (it seems much easier when you’re not being recorded) but not today — it was great to have you in the hot seat.
– Trevor, commenter on ‘Unbelievable?’ Forum after my debate with Apologist Chris Sinkinson

“Well done on the show, James.  It’s usually easier to spot little logical errors while listening to a conversation than when you’re actually a participant  That’s why a semi-literate like myself can sometimes spot a misstep by Dawkins or Hitchens, who are/were smarter and better educated.  Not this time, though, and it took me by surprise. I have to say that I was impressed with your focus, because you spun back on two or three points that would have gone past any other atheist I’ve listened to.  They certainly would have gone past me.”
– Charlie, Skepticism Examiner,  commenter on ‘Unbelievable?’ Forum after my debate with Apologist Chris Sinkinson

“Game, set and match – well done!”
– Rob, commenter on this blog after my debate with Apologist Chris Sinkinson

My Philosophy of Public Speaking

When I was a kid, my parents forced me to take verse- and prose-reading classes. Sometimes I would groan and whine and whinge, claiming that I hated it, and just wanted to stay at home. But always, when I got to the class, I loved it. I loved the feeling of the poetry in my mouth – how it rolls around and resonates in the whole body, and how you can send it forth in a raging torrent, a languid drip, a hushed whisper or a mighty explosion.

I now recognize those early lessons as one of the greatest gifts my parents could have given me. For years now I have understood that my most precious asset is my voice. Much can be achieved with the written word, but once a voice raises words from the page the possibilities are limitless! It is significant to me that Robert Ingersoll, the inspiration for this site, was known primarily as an orator, and I hope to keep the tradition of public speaking alive. That’s one of the reasons why you can hear me read aloud many of the posts on this site!

In my public speaking I seek to fuse narrative with rigorous argument, humor with solemnity, passion with a call to action. Fire in the heart, drumming in the head.

Nothing excites me more than an invitation to speak, so if you’d like to hear me please get in touch! You can also book me through the Secular Student Alliance’s Speakers Bureau by clicking here. They’ll help defray the costs of my visit, so it’s a great deal if you’re a student group.

I am truly delighted to have recently received my Humanist Celebrant Certification from the Humanist Society, which enables me to perform weddings, memorials, and other ceremonial functions. Since creating such ceremonies is one of the primary purposes of this site, I welcome opportunities to help create ceremonies which are memorable, powerful and enriching.

If you would like to work with me, contact here and together we will fashion something remarkable.

On Tuesday 12th October, 2010, I gave a speech at a Rally at Harvard to call people to act against homophobic bullying in schools.

“Good (Without God)”, speech at the Center for Inquiry Leadership Conference 2011

“The Symbolic Poverty and Potential of Humanism”, speech for the Greater Worcester Humanists

On Saturday April 2nd, 2011, I gave a speech at a counter-protest to a conference at Harvard which hosted virulently anti-gay and anti-Muslim speakers. I spoke on the importance of secular government:

As a panelist at the Congress on the Future of Faith at Harvard I spoke of the importance of Humanism and atheism to me personally, and against the discrimination atheists face in public life. You can read the speech here.