Eli. A Pinocchio real-boy with spindly, tinker-toy legs. Using these legs, he plied the vaulted heights of McCosh Hall, collegiate gothic classroom exemplar on the west side of the Princeton campus, but showing its age. It was an Indian summer afternoon several weeks into October of this same 4th-grade year.

Eli tested the wooden stairs at the back of the building. He planted his feet carefully, each step a singularity, the moist air a-hum, stairwell narrow enough that he could guide his progress with a hand sliding along each wall. Up and up he went, to the little door at the top providing entrance to the sky loft. The door opened easily enough. Eli scooted his head down to enter, then dropped to his knees.

Two-by-sixes in the loft lay end to end like railroad track planking atop the original flooring. Eli navigated the rails with easy familiarity, winding past crates of books, stacks of chairs, broken desks, boxes of files, toward the shaft of light spiking through the interior window at the far end of the building. Dry-rotting floorboards creaked beneath him, but he paid them no mind. He’d done this before, and he knew what lay beyond the window. In the auditorium below, two score of young men (along with one lone woman) sweating profusely, transpiration of minds and bodies. Down there with them he would find his father.

On the proscenium stage, Tobias worked the crowd. He flung his sports jacket against a chair, tugged the Windsor knot of his tie, rubbed the back of one hand across his forehead, through his short, dark hair. “What you must understand, Mr. Warren,” he declaimed, “what you must understand, is the center of the American experience, the dynamic core! If we wish to locate that center, we must return ourselves to the formative years of the nation’s history. When would that be, Mr. Warren?”

Mr. Warren rolled his eyes. He was small and bespectacled. Eli loathed Mr. Warren, who was not deferential, in the way smart students sometimes are not.

“That would be obvious, sir. At the Constitutional Convention of 1787.”

“What enduring principles did the framers of the Constitution articulate at that time, Mr. Warren? What center did they construct?”

“Well, sir, strictly speaking there was no center, unless you want to suppose that Publius, as he spoke in The Federalist represented a single point of view. But we all know that is a difficult supposition to sustain, given the dramatic differences in the tone and implications of the Madisonian and Hamiltonian visions.”

Mr. Warren slumped in his chair. He glanced idly at Tobias.

From his window, Eli examined Mr. Warren as he would a rodent gnawing itself. How could this student speak to his father with so little regard for his father’s eminence, his father’s greatness? Eli didn’t doubt that Tobias would devour this smug classroom pest.

But Tobias didn’t pounce. Instead, he smiled at Mr. Warren. Eli wondered if his father wanted the students to understand he was toying with their classmate, cat to rat.

“Mr. Warren. Your erudition humbles me. If I understand you correctly, you do not believe the Federalists, or any other group, provided to the nation a constitutive and enduring set of principles, concepts, or beliefs about politics.”

“Well, let us then consider the Puritans. What can you tell us about the Puritans, Mr. Warren?”

Mr. Warren now looked puzzled. “A marginal group,” he said. “Confined to a single region of the country. The Puritans were anachronistic by the 18th century. They symbolized intolerance, bigotry, hypocrisy, and irrationality. These were tendencies the Enlightenment altogether opposed, and most of the framers of the Constitution were products of the Enlightenment.”

“I see.” Once again, Tobias paced. “Mr. Warren,” he says, “you and the rest of the class are also products of the Enlightenment. That is why you believe the nation, for all practical purposes, began with the Revolution and the Constitution, with Washington, Jefferson, Madison, and Hamilton. You understand politics to be a rational enterprise, principally concerning the effort, through bargaining, to adjust and balance interests.”

Tobias froze. He stared straight at Mr. Warren, eyes like rifle sights. “However, let us be clear about it all, young man. Let us be clear, that when we locate this country’s guts, we return, ultimately and inevitably, to Puritanism and to its Calvinist and Augustinian sensibilities about the nature and condition of the human species. This is not a fairy tale, Mr. Warren. This is not a fable constructed to serve the ends of the powers that be. The Puritans instruct us about real life.”

Wrapped with effulgent light, Eli shut his eyes and allowed these words to suffuse him baptismally. He loved to hear his father lecture, creeping into the loft of McCosh Hall to listen to these sermons (so students commonly termed them). Aware of this penchant, Tobias instructed Eli to desist.

“It’s too dangerous, Eli! I don’t want you up there. You’re 9 years old. For Christ’s sake! Play with your friends after school. With your brother and sister.”

But Eli persisted. He loved his father. And while Eli could barely comprehend the details of the debate, he somehow knew what Tobias meant when he spoke about the moral foundations of the American republic, about the idea of righteousness. Could righteousness be the way a boy acts in the world? The standards to which a boy holds himself?

The day was hot. Eli squirmed on his perch. The angle of his view through the window forced him to twist his head down and to the side. He was tired. His neck hurt.

Shifting his body to release pressure on his neck and forearms, his foot scraped flooring on one side of the two-by-sixes. He clapped a hand to his mouth, as if retroactive silence might conceal his identity. But Tobias peered up at the window. He saw Eli. His eyes narrowed, and his brow furrowed into divots, clots of skin and muscle.

In haste to duck away from the window, Eli slipped from the planks altogether, on to the old flooring. No longer able to bear even the weight of a 75-pound boy, the boards gave way. Eli plunged toward the stage, toward his angry father, some 20 feet below. Miraculously, Eli grabbed one of the broken boards. He hung from the board, scrabbling to purchase a handhold.

Tobias leapt from the stage, heading for the door. No time. No time. Tobias skidded, turned, sprinted back to the stage.

The students milled, craning Ichabod necks to see the boy. Some surged to the stage. Others retreated to exits. Mr. Warren scrambled from his chair to call for help. Inadvertently, he blocked Tobias’s path to his son.

“Away from the stage!” Tobias yelled. “Away!”

Like the string on a violin, his son’s body quivered down its length.

Board nails bent against the joist. Eli’s arms. So tight. His father, crouching, holding out his hands, a woven basket to cradle Eli, his father Willie Mays cradling a fly ball.

Eli released himself, dropping like a stone toward his father. At that moment, a student jostled Tobias. Mr. Warren, again! Trying to assist. In the moment Tobias needed to recover his position, Eli plunged through his arms.

The right leg bore the full weight of the fall, landing within a tangle of ropes and lights lying at the lip of the stage, pitching Eli forward, flipping him, a diver in full tuck, slapping his head against the stage floor, once, twice, thrice. A salmon striking the deck. A salmon in the hands of an angry God.

From snarls of hemp and iron and glass at the edge of the stage, Eli’s little body hung, a broken marionette. The leg had disappeared. Tobias peered more closely. Yes. The pants leg angled away from the boy’s body, impossibly at variance with physics and mechanics of human anatomy. Within folds of denim, Tobias discerned no clear form, no solid mass.

“The leg is liquefying,” Tobias said to himself. Blood puddling where femoral, fibular, and tibial bones had pierced and exploded upon the patella and the intercondylar eminence. Tobias wondered how such blood could spill from the shattered leg of a broken boy. 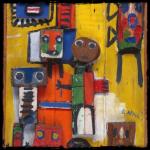 August 24, 2019 NYT 1619 History Project
Browse Our Archives
get the latest from
The Creation Project
Sign up for our newsletter
POPULAR AT PATHEOS Public Square
1