This essay recalls how an essay I wrote in 2013 about Supreme Court Justice Antonin Scalia alerted me to the deeper structures and dynamics of the modern American conservative movement. First published in The Descent of Man Substack newsletter.

At the tail end of 2012, I sold a small online legal news and research company I had founded a decade before to legal data purveyor LexisNexis. Grudgingly, I assumed my new identity as a subaltern at this large company. Lexis had required I remain employed as a condition of the sale, but my new managers did not really know what to do with me and frankly did not much care if I did anything at all. I tried in my own fumbling way to make myself useful, however.

One of my initiatives involved a proposal to write somewhat in-depth “think pieces” about the law for the Lexis marketing department. Given my own tone-deaf marketing instincts as a businessman, I should have known this effort would not end well, but I pressed on anyway, somehow imagining that my academic training in a prior life, along with ten years of exposure to the legal practice world, would burnish my words with such authority that any small-minded marketing objections would dissolve like wet cardboard.

I wrote an essay called “Wolf at the Door: Antonin Scalia and the Death of American Law.” I was pissed when I wrote the essay. It was a screed against what I took to be the deeply toxic consequences of Scalia’s long tenure as a Supreme Court Justice. The piece emphasized the enduring impact of his swashbuckling verson of legal conservatism on the Supreme Court and on constitutional jurisprudence on the United States. I did not pull my punches.

The problem is this. Legal conservatives like Scalia attach a meta-meaning to the Constitution (it is designed to impede change), along with particular interpretations of its clauses, that elevate the importance of old-fashioned politics for securing non-universal rights (versus judicial remedies).

However, the meta-meaning conflicts with an unfortunate reality. The political organs established by the Constitution have ceased to function. Moreover, we have ample evidence that this stalemate is exactly the political result favored by legal conservatives.

We have seen this before. In 1860. In 1936. Actually, we even witnessed this happen in 1786. The stalemate is called a Constitutional crisis. Under these circumstances, the principles that support the rule of law in the United States — equality, fairness, justice, transparency — principles enshrined within the preamble to the Constitution itself, begin to crack and crumble.

Knowing full well that a broad swath of their client base worshipped Scalia, and would not relish the imputation to him of a “medieval” legal vision (with all that implied specifically about the blending of specific conceptions of politics and religion), the Lexis marketing people shrank from me with an unfeigned horror. The piece did not run. Indeed, I never wrote another word for Lexis and within six months had slipped out the side door and embraced the uncertain future as a writer that my hare-brained entrepreneurial pursuits had been designed all along to advance.

The Silent Part Out Loud

In the meantime, in June of 2013, the conservative majority on the Supreme Court issued their opinion in Shelby County v. Holder, which dismantled key provisions of the Voting Rights Act of 1965 as a constitionally unwarranted “entitlement” (Scalia’s term) for black Americans. Of course, other recent landmark Court rulings – District of Columbia v. Heller in 2008 (concerning the constitutional right to possess guns in one’s own home) and Citizens United v. FEC in 2010 (which redefined unlimited contributions to political campaigns of corporations as constitutionally protected speech) – had similarly used a literal reading of the Constitution as a crude hinge for swinging political doors shut or open, with vast and immediate consequences for the definition, flow, and uses of power in the United States. And one year later, in its June 2014 ruling in Burwell v. Hobby Lobby, the Court’s conservative majority achieved similar results with its claim that the Affordable Care Act’s contraception mandate violated the religious freedom of corporate stakeholders.

And so I knew that I was on to something with the Scalia piece, even if I remained less than precisely sure what that “something” might be. I continued to follow this trail because I knew that Scalia was a wolf in wolf’s clothing, a leader of the legal conservative movement partly because (not unlike William Barr) he could not avoid saying the silent part out loud. I knew Scalia was alerting all of us, if we only understood how to listen, that there was some supremely fucked-up shit coming our way.

The Creation Project thus began in 2013 as an effort to provide some kind of philosophical warrant, however vague it might have been, for the nameless dread that, even then, avatars for a robust, and seemingly principled, constitutional conservatism such as Scalia reliably aroused in me. The intellectual adventures on which those concerns subsequently led me, and the (both fascinating and terrifying) philosophical conclusions about the last millennium of Western history where I finally arrived, are the story I will tell you in this regularly scheduled Tuesday edition of The Descent of Man newsletter.

About The Descent of Man Newsletter

The Descent of Man is a daily newsletter of literature, philosophy, history & current affairs, with a focus on the last millennium of Western history. If you have enjoyed reading this post, you can subscribe here. It is free (with no advertising or obligation). 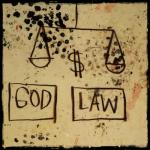 June 14, 2020
William Barr and the Tropes of Natural Law
Next Post

June 16, 2020
Browse Our Archives
Related posts from The Creation Project