Rivers of Belonging: Thoughts from the Borderland

At Home by the Water

Rivers make good boundaries. Not so much for keeping unwanted strangers away: they are a bit fickle for that work. Their depths fluctuate, and the water level changes seasonally. Besides, humans are pretty good by now at building boats and bridges.

But that’s not really the purpose of good boundaries anyhow. Like a zipcode or the four mountains of Navajoland, boundaries let us know where we come from. Where we are at home. They show us the edges of a place, and so make it a pace to belong. Rivers are especially good at place-forming, due to the way they provide sustenance. The flow of water brings life. Rivers are like parents who both call us home and give us what we need to survive.

Last week I traveled with some students and colleagues to Laredo, Texas. We heard accounts of the refugee crisis along the U.S. southern border. We learned about the physical and mental health needs that the crisis brings. We heard stories of remarkable faith from those fleeing violence as well as from those helping them find a place to land.

We also spent some time walking the Rio Grande. That boundary, as Reverend Nancy reminded us, bears a double name that signifies its symbolic complexity. On the north it is “grand,” while from the south it is “wild and fierce” (Bravo).

The second creation account from Genesis goes into some surprising detail naming rivers.

“A river flows out of Eden to water the garden, and from there it divides and becomes four branches.” (2:10). The text names these four rivers. It also names the lands that they mark out, and even the precious stones found in one of the places. The last one named is the Euphrates, which the author seems to think needs no introduction to his Jewish readers.

Notice that the garden, which the first account does not speak of, is not actually called Eden, but is rather a garden in the land of Eden. That’s why the river can flow from the land and into the garden, and from there branch out. The river is a boundary of a sort, like the other four that encompass their various lands. But here the boundary is also the center. You know you are in the garden because you are in the basin nourished by this great unnamed river. You are home.

Later on in the story the promised land is named by God as a land between two rivers, the Euphrates and the “great river of Egypt.” This is still, obviously, naming a place of belonging rather than a place of exclusion, since they form two roughly parallel and so non-intersecting lines. The point seems to be more about the vast number of Abraham’s descendants: they will now need two river basins to mark out their place of belonging.

It’s curious to note that one of the rivers of Genesis 15 is the Nile itself, which the text has just prophesied will mark a place of enslavement. The promise, then, has a hint of eschatology: you will dwell from Eden’s Euphrates to Egypt’s Nile, as if the exile from the one and the enslavement in the other never happened.

Indeed, with sin and enslavement, rivers become markers of liberation. The Red Sea crossing is an escape from Egypt, the Jordan crossing marks the end of the wilderness years. The Ohio River, on whose banks I was born, was this sort of boundary for generations of enslaved Black Americans. The Rio Grande is that sort of boundary now, for those fleeing violence from all over Latin America.

But the Bible story flows back to its own source, so to speak, with the image of a river running through the streets of a city whose gates stay open day and night. It’s that kind of boundary once again: water that feeds and nourishes and gives us a home. And a home, notice, for all peoples.

Raul at the River

While walking the Rio Grande last week, I said hello to a man who was fishing the shore. He didn’t seem to take my presence as an intrusion, so I lingered to talk. I told him my name and what had brought me and my companions there. He told me his—Raul—and what brought him. He had been a truck driver, picking up goods that crossed the river and shipping them all over Texas. Then his wife was diagnosed with a chronic illness, so he came home to work for the city. He now fishes on weekends with his father, bringing home catfish for the family table and selling the rest at local markets.

While we talked, armed cartel trucks drove by on the Mexican side. Behind us, armed Border Patrol SUVs passed us or sat in the park and kept watch. The train whistle blew. The south-facing mall advertised Gucci and Hilfiger in the largest font I’ve ever seen.  We were surrounded by the trappings of a militarized border, and the signs of the various interconnected systems that profit from it.

It’s easy to think of the river, there in Laredo, as a monetized line of separation. It’s much more difficult to see it as a gracious flow of water that provides a home.

Raul, for me, became a prophet of the second kind of boundary. The Edenic and New Jerusalem sort, with that hint of eschatology from Genesis 15.

He had returned to a city that relies on the river, to receive its sustenance, so that he could offer sustenance in turn to his wife. He stood now on the bank with his stringer full of catfish, as if he could see what the rest of us could not. We saw the bridges, the weapons, the surveillance cameras. But he went on receiving what the river gave and passing it along as if none of that concerned him.

I’m sure it does. It’s impossible to live in Laredo and ignore it all. But there he was, all the same. It’s as if he were fishing in the Nile or the Euphrates, and the memory of slavery and foundational curses were a fading mist on the water’s surface.

Boundaries, biblically speaking, are not for monetization, militarization, or exclusion. They mark places of sustenance and belonging. They etch out specific places that call up cherished memories and affection in us. They tell us that we belong and where we are at home, even if it’s only the prophets among us, like Raul, who can see it. A few, like him, can stand at our fear-laden rivers and remind us of what is most real.

April 30, 2022 Faith is Persuasion
Browse Our Archives
Related posts from The Diagonal Way 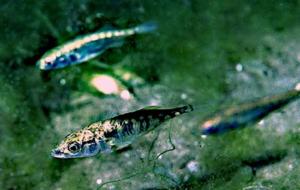 General Christian
What Fish Teach Me about Forgiveness
The Diagonal Way