Green's latest protest – like his petition – was a complete washout

Green's latest protest – like his petition – was a complete washout August 5, 2008 Guest Contributor

POOR Stephen “Birdshit” Green. There’s so little around these days to cheer up the miserable bigot, who looks about to be bankrupted for sticking in nose in where it didn’t belong.

On Saturday, a bedraggled and deranged-looking Green, together with a pathetically small band of damp, sodomy-obsessed Christian “witnesses,” clustered under a grey, drizzly sky in attempt to communicate their collective misery to the hundreds of thousands of revellers who took part in this year’s Brighton Gay Pride event.
The dismal morning weather was, of course, God’s way of protecting Green and his cohorts from the wrath of the mass forces of “perversion”.

The steady rain ensured there would be none of last year’s trouble, when a number of drunken activists threw bottles and cans, most of them empty, at the Christians.

But, when good luck smiled down on the day, producing glorious sunshine for the main festivities in Preston Park, the Christian Voice hate-mongers were – we are told – denied access to the park by the police, and so prevented from spreading their venom there.
In the end, even the seagulls couldn’t be asked to crap on the soggy god-suckers.
So Green dragged his sad, sorry arse back to Wales, there to take solace in one of his rare successes: the apology he managed to bully out of a gutless local paper which, at the first whiff of controversy, abandoned its journalistic integrity, issued a shameful, grovelling retraction, and went sprinting for cover.
The South Wales Echo is now refusing to comment on their betrayal of press freedom principles.
But O’Neill’s column, removed from the Echo’s website, is now available here.
Bully-boy tactics always triumph when you confront a coward, as Green knows so well. In another of his many tedious press releases the “Prophet” Green, as he was dubbed by O’Neill, declared:

Media Wales’s gracious apology and the elimination of the offending article from the website is a victory for decency and shows newspapers can uphold civilised standards of behaviour. The fact that Media Wales is part of the mighty Trinity Mirror group means the apology is also a testimony to the power of prayer and the effectiveness of Christian witness, for both of which we give all the glory to Almighty God.

Of course the article should never have been published, but I am sure that lessons have been learned and a similar outrage will not happen again. I trust that other papers and media will also take notice and exercise better editorial control over the looser cannons in their journalistic ranks. Even after the abolition of the blasphemy laws, Christians will not tolerate insults against their Lord and Saviour.

Then Green acknowledged the launch of our petition to have the apology withdrawn, and O’Neill’s column reinstated on the paper’s website

Atheist bloggers are apoplectic and one of them started a petition, which attracted the attention of fewer than 150 armchair Jesus-hating zealots in five days.

In petition terms 150 signatures is next to nothing. It is so much easier to sign a petition than put yourself out to stand in the street witnessing â€¦

Well, if the “Prophet” Green wants to bandy about petition numbers, let us reflect on the success of his own petition, in which he called upon Mark Thompson of the BBC and Jonathan Thoday of Avalon to waive the Â£90,000 costs awarded to them against him in the Jerry Springer: the Opera case.
As of today, 1,461 people had signed Green’s petition – but around half had used it to scorn, berate and abuse him. On the other hand, 1,415 had signed a counter-petition. So public opinion is running against him by over 2,000.
And this is what Green has to say about yours truly – “the sad character who started the petition” calling for the Echo’s retraction:

[He] asks Media Wales to do something which he himself could not find the guts to do: blaspheme and insult Jesus Christ in public. He attended a party held by secularist zealots earlier this year to celebrate the passing of the blasphemy laws.

The funny thing was, it was held at a secret location, for fear of Christian protests! The Jesus-haters gathered in private in some hotel in London and blasphemed to each other, something they could safely have done at any time during the last thirty years.

What Green fails to point out was that I have indeed blasphemed in public.
On Thursday July 11, 2002 – the 25th anniversary of Gay News’s conviction for blasphemy following the publication of James Kirkup’s poem The Love That Dares To Speak Its Name, which suggested that Jesus was gay – I, together with a number of other secular and human rights activists, read the poem out on the steps of a central London church. The event appeared on national television news.
Green, clutching a Bible, was present at that civil disobedience protest. So were a sizeable number of other crazy, caterwauling Christians, who did their best to drown out the reading.

Given their atrocious, hysterical behaviour on that occasion, it made perfect sense for the organisers of the Bye-Bye Blasphemy party to keep its location a secret. This was a celebration of the end of a vile law.
Many of those present had spent countless hours over many decades to rid Britain of the blasphemy law, and the last thing they wanted was to be harangued by clots of delusional loonies.
We also had the responsibility of ensuring that management and staff at the restaurant – not an hotel – were not subjected to Green’s tactics of intimidation and blackmail. 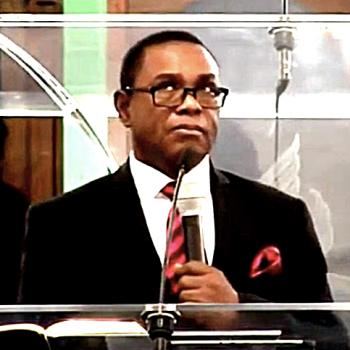